"It can be done. ... It will take place and it will go relatively quickly.  ... If you have the right people, like, in the agencies and the various people that do the balancing ... you can cut the numbers by two pennies and three pennies and balance a budget quickly and have a stronger and better country."

President Donald Trump hasn't kept his promise to quickly balance the federal budget. In fact, on his watch, it's going in the opposite direction.

The nonpartisan Congressional Budget Office reported that the preliminary federal budget deficit for fiscal year 2018 was $782 billion. That was $116 billion more than the $666 billion shortfall in fiscal year 2017.

And the most recent CBO projection for fiscal year 2019 shows a deficit of $981 billion. Each year from 2020 to 2028, the CBO projected, the deficit would top $1 trillion annually.

This state of affairs was not divorced from actions taken by Trump himself, analysts say.

The two biggest drivers of the projected increase in the 2019 deficit were the Republican tax bill and the bipartisan agreement on federal spending, both of which Trump signed.

In the spending legislation, Democratic and Republican lawmakers largely agreed to increase outlays in a wide variety of areas, including defense spending. That came after a period under President Barack Obama and the Republican-led Congress when across-the-board spending constraints known as sequestration curbed the growth of federal spending.

Here's how the Committee for a Responsible Federal Budget, a group that's hawkish on the deficit, broke down the contributors to the projected budget deficit for fiscal 2019. The analysis factors in the positives — the economic growth — as well as the budgetary negatives expected from the legislation he signed. The tax bill is shown in green, while the spending bill is in shown purple. 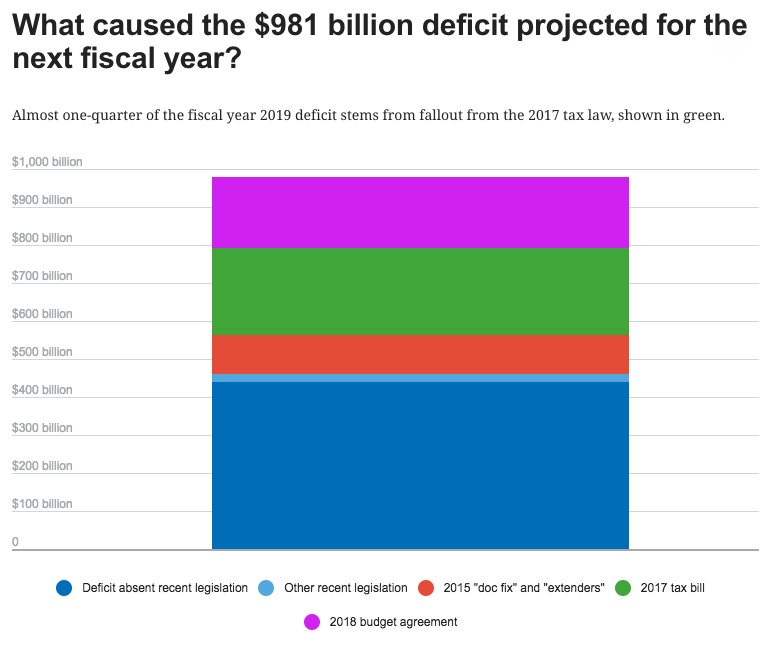 "I don't think he's kept to any definition of shrinking the deficit quickly," said Marc Goldwein, senior vice president and senior policy director for the Committee for a Responsible Federal Budget. "It's only gotten more out of balance. It was not completely his doing — it was already projected to rise — but a large share of the increase comes from what he signed into law."

The White House did not respond to an inquiry for this article.

On Trump's watch the annual deficit has expanded rather than shrunk. We rate this Promise Broken.

Unlike the House version passed last week, the Senate's fiscal 2018 budget allows up to $1.5 trillion to be added to the deficit over 10 years to offset coming tax cuts.

The budget passed the Senate 51-49, facing opposition by all Democrats and Republican Sen. Rand Paul, R-Ky.

Despite the proposed increase in the deficit, the White House commended the budget in a statement.

"President Donald J. Trump applauds the Senate for passing its FY 2018 Budget Resolution today and taking an important step in advancing the Administration's pro-growth and pro-jobs legislative agenda," the press release reads. "This resolution creates a pathway to unleash the potential of the American economy through tax reform and tax cuts, simplifying the overcomplicated tax code, providing financial relief for families across the country, and making American businesses globally competitive."

While the budget unlocks the path to one of Trump's promise to cut taxes, the Senate budget does the opposite of eliminating the federal debt.

This promise continues to rate Stalled.

Prior to taking office, President Donald Trump promised to balance the federal budget by making small reductions in spending each year.

"If we save just one penny of each federal dollar spent on non-defense, and non-entitlement programs, we can save almost $1 trillion over the next decade," Trump said in a September 2016 campaign speech at the New York Economic Club in Manhattan. "If our plan exceeds the 3.5 percent 10-year growth average, then our jobs proposal will actually reduce the deficit."

Exactly when could Americans expect to see a balanced budget?

Trump didn't give a timeframe to Fox News anchor Sean Hannity when Hannity asked earlier that year. Instead, he said it would be done "fairly quickly," but it would take longer than one or two years.

The White House took its first steps to balance the budget with its release of the president's FY 2018 spending proposal, in which Trump asked Congress to reduce non-defense discretionary spending by 2 percent every year for the next 10 years as well as reform various entitlement programs. This, combined with proposed regulation rollbacks and tax cuts, would result in a surplus budget by 2027, according to the proposal.

The U.S. House of Representatives spending plan, which was released in July, largely mirrored Trump's proposal.

Both plans, however, have been criticized by nonpartisan groups for relying on an economic growth model that might be overly optimistic.

That lower growth number means that by 2027, deficit spending would be closer to $720 billion instead of the $16 billion surplus calculated under the White House proposal. (The House assumed an average 2.6 percent economic growth over the next decade and projected a $9 billion surplus by 2027 in its plan.)

The White House budget proposal also neglected to factor in Trump's promise to lower individual and corporate taxes, the nonpartisan Committee for a Responsible Federal Budget pointed out in a statement.

"The budget balances on paper – and having a specific fiscal goal is an important first step," said the committee's president, Maya MacGuineas. "But it only achieves that goal by relying on incredibly rosy economic growth assumptions along with very aggressive and unrealistic future cuts while omitting a potentially extremely costly tax reform plan."

A final budget must be agreed on by Congress and the White House before Oct. 1.

Whether or not the budget will ultimately balance depends on several factors including tax legislation, actual economic growth and how much Congress is willing to cut in spending over the next few years. But independent analysis of the proposed budgets finds fault with the budgets' overly optimistic assumptions about future tax revenue. For now, we rate this promise Stalled.

Congressional Budget Office, "An Analysis of the President's 2018 Budget," July 2017

Statement from the Committee for a Responsible Federal Budget, "President's Budget Relies on Rosy Assumptions," May 22, 2017