After a Travis County judge ruled in favor of school districts challenging the state’s school funding system, the Quorum Report, a fount of Texas Capitol news and analysis, credited PolitiFact with playing a pivotal role.

We were flattered at the mention, though we later pinned down only that the judge read one of our fact checks before finding and highlighting a chart showing how Texas school spending has changed since 2004.

Our takeaway: It's good to be read.

Our pulses quickened after the Quorum Report wrote Feb. 4, 2013, that state District Judge John Dietz that day "ruled that the current school finance system is unconstitutional and this time it wasn’t the words of Demographer Steve Murdock, but a chart from Politi(F)act Texas that appears to have swayed the jurist." The reporter's PolitiFact reference was later noted in an oped column by Democratic consultant Jason Stanford, but other news stories on Dietz’s decision did not mention PolitiFact.

When we inquired, the judge told us it would be untimely for him to comment on what went into his decision. He said, though, that he found the noted chart on school spending in Texas after reading our recent debunking (our word) of Gov. Rick Perry’s claim that education spending had considerably outpaced enrollment growth over the previous decade.

Quorum Report scribe Kimberly Reeves told us by email that when Dietz displayed the chart in his courtroom that day, she witnessed a text exchange between key players aligned with school districts in the lawsuit saying, in essence, "he got that from PolitiFact!"

We’ve explored numerous school funding claims, particularly in the wake of the 2011 Legislature approving cuts. A sampling of those checks appears to the right. However, the board’s chart was not tucked into any of our articles.

Reeves said she later learned that the chart--showing the change in public education revenue from 2004 projected into 2013 in current and inflation-adjusted dollars--appeared in an annual report on state finances issued by the Legislative Budget Board.

To our inquiry, Dietz said via a Facebook message that he had displayed Figure 181 from the budget board’s 2012-13 "Fiscal Size-up" report. That chart is below and on page 248 of the online version of the report. 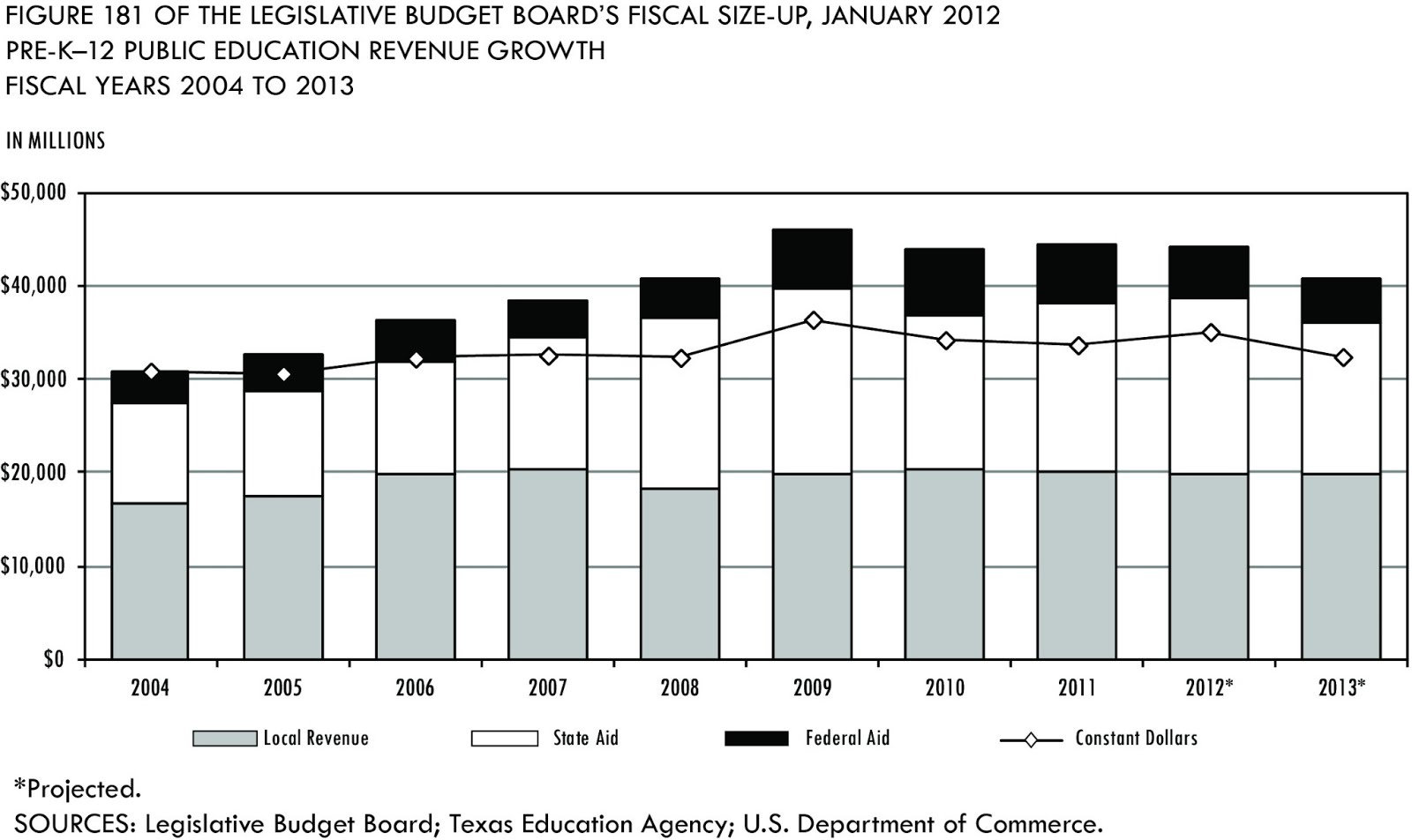 Dietz said a slightly altered form of the chart was presented during October 2012 testimony by lobbyist and school finance expert Lynn Moak.

Dietz said he later spotted the chart in the board report after, he said, PolitiFact Texas evaluated Perry's Jan. 9, 2013, statement that school funding had increased 70 percent from 2002 to 2012 while student enrollment escalated 23 percent. Summing up, Perry told reporters: "I think under any scenario over the last decade, the funding that we have seen in the state of Texas for public education has been pretty phenomenal."

We rated Perry’s claim as False. State education aid outpaced the 20 percent growth in enrollment by about the cited margin. But that is without considering inflation and the impact of an annual swap of state revenue for reduced local property taxes set in motion in 2006, which drove up state spending without in itself delivering more education aid. Adjusting for those factors, Texas schools in 2012 fielded 25 percent less in state aid than in 2002.

In his reply to us, Dietz did not speak to whether PolitiFact articles affected his decision. "I can't discuss what my thinking was at this stage, it will be reflected in my Order and Findings of Fact which are to come," he wrote.