Donald Trump refuses to budge on his wrong claim that he "watched in Jersey City, N.J., where thousands and thousands of people were cheering" as the World Trade Center collapsed.

Since PolitiFact and other fact-checkers debunked his statement, Trump and his campaign team have suggested that the media is trying to cover it all up, and he’s found supporters who tell him he’s right.

New information, primarily from media reports at the time, support the notion that there were rumors of a handful of people celebrating in New Jersey on 9/11. However, none of those rumors have been proven true, and there is still zero visual evidence of these celebrations. Further, none of these rumors suggest there were more than a dozen people purported to be seen cheering, as opposed to Trump’s claim that he saw "thousands and thousands."

In other words, Trump’s claim is still Pants on Fire. (Read our previous article to catch up on our original findings.)

Most recently, Trump pointed to a Sept. 16, 2001, clip from WCBS, the New York City CBS affiliate.

In the clip, WCBS reporter Pablo Guzman identified a Jersey City apartment building, "one that an investigator told me, quote, ‘was swarming’ with suspects, suspects who I’m told were cheering on the roof when they saw the plane slam into the Trade Center. Police were called to the building by the neighbors and found eight men celebrating, six of them tenants in the building."

"They saw something else: a model of the trade center on the roof, along with sets of binoculars, the kind of set used by an architect or an engineer for a presentation, an investigator told me," Guzman continued. "They knew, he said, that the planes were going to hit, and they wanted a ring-side seat."

"Eight men celebrating," who the report suggests were co-conspirators, is nowhere near the same thing as "thousands and thousands of people were cheering."

For good measure, let’s visualize the difference. Here’s a group of eight people compared to a group of 2,000 people: 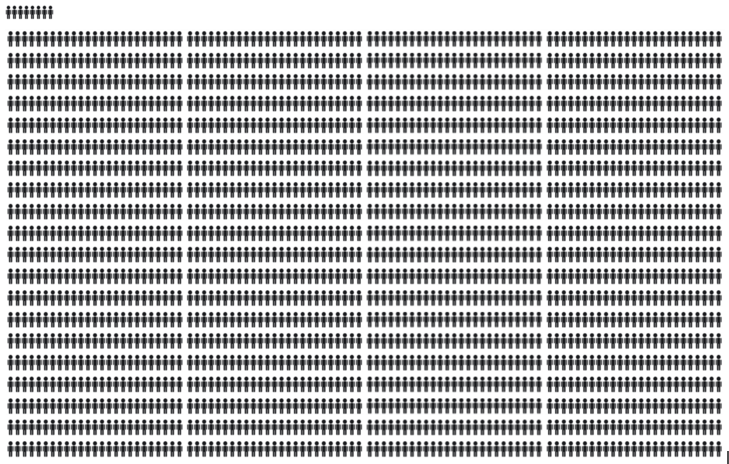 Many people have also pointed to a Sept. 18, 2001, Washington Post article that claimed "law enforcement authorities detained and questioned a number of people who were allegedly seen celebrating the attacks and holding tailgate-style parties on rooftops while they watched the devastation on the other side of the river."

Here’s what our friends at the Washington Post Fact Checker found out about this story:

The reporters who wrote the story do not recall whether the allegations were ever confirmed. "I certainly do not remember anyone saying that thousands or even hundreds of people were celebrating," said Serge Kovaleski, one of the reporters. "That was not the case, as best as I can remember."​

Fredrick Kunkle, the other reporter, added: "I specifically visited the Jersey City building and neighborhood where the celebrations were purported to have happened. But I could never verify that report."

So the Post's 2001 story was inconclusive at best. On a related note, the Associated Press, on Sept. 17, 2001, described "rumors of rooftop celebrations of the attack by Muslims" in Jersey City. But the same report said those rumors were "unfounded."

Sliwa has responded to say the clip was selectively edited. In fact, Sliwa was talking about a few people who called in claiming to have seen a handful of people celebrating in nearby Paterson, N.J., rather than "thousands and thousands" in Jersey City.

An extended clip of Sliwa’s show was featured in a November 2001 MTV investigation into alleged Paterson celebrations. Some Trump supporters have pointed to this MTV report as evidence. MTV interviewed a high school senior who said she saw "a lot of people," probably around 13 or 14 years old, in downtown Paterson "chanting and raving" and saying "burn America."

On Nov. 25, 2015, MTV re-interviewed the same woman, Emily Acevedo, and she said her impression is that the kids were just teenagers acting out. She said they were breaking public property with sticks and bats, which was "not entirely uncommon for this part of Paterson."

People have also sent us a New York Post article from 2001 that says, "Here in New York, it was easy to get angry listening to Egyptians, Palestinians and the Arabs of nearby Paterson, N.J., celebrate as they received word of the murderous attack in New York and Washington."

This article contains no official documentation or evidence to corroborate the claim, so it is not proof.

Others have come forward to debunk Trump’s claim with their own evidence. Irfan Khawaja, a philosophy professor at New Jersey’s Felician University, researched rumors of New Jersey Muslims celebrating on 9/11 and found that "there is some evidence that a few Arab-American adolescents briefly relieved their political frustration in front of a library in South Paterson, in a way that might be defined as celebrating."

But "no evidence exists of an organized or sustained celebration of the terrorist attacks," Khawaja wrote in a 2005 article.

Khawaja has published his own debunking of Trump’s original statement and the fall-out on his blog.

None of the tips about people celebrating on 9/11 turned out to be anything but rumors, said John Farmer, who was New Jersey’s attorney general at the time, in an interview with the New York Times.

"We followed up on that report instantly because of its implications," Farmer said. "The word came back quickly from Jersey City, later from Paterson. False report. Never happened."

"It didn’t happen," said Republican presidential candidate and current New Jersey Gov. Chris Christie at a campaign stop in New Hampshire. "The facts are the facts, and that didn’t happen in New Jersey that day and hasn’t happened since."

Former New York City Mayor Rudolph Giuliani told CNN there were some "reports" of celebrations in New York, but if there had been "thousands" of people celebrating in New Jersey, "I would have known that for sure." He added that Trump was "exaggerating."

Trump and his supporters have produced a few pieces of information that they say prove his statement right. Yet after reviewing it, the best we can say is that maybe there were a dozen teenagers causing a ruckus in Paterson. And maybe there were eight people cheering on a rooftop in Jersey City.

But this is a far cry from what Trump said: That he personally watched thousands of people cheering.

Our friends at Snopes noted that muddled memories of what happened on 9/11 have been well-documented, even noting that former President George W. Bush himself misremembered what he saw on television that day.

Maybe it’s a case of false memory, but that doesn’t make Trump’s claim any better than Pants on Fire.