Donald Trump responds to Lie of the Year, says he's ‘been proven right’

PolitiFact awarded the 2015 Lie of the Year to the misstatements of Donald Trump. [CAMERON COTTRILL | Tampa Bay Times]

The inevitable has happened: After being awarded the 2015 PolitiFact Lie of the Year, Donald Trump has fired back.

"PolitiFact is a group that if I said something right down the middle they are always going to be negative," Trump said. "They are leaning in a certain direction, and no matter what you do with them -- I mean they are a very dishonest group in my opinion."

Trump also criticized PolitiFact during a live phone interview Tuesday with Fox & Friends. He took issue with the Pants on Fire rating for his Nov. 21 claim at a rally in Birmingham, Ala., that "I watched when the World Trade Center came tumbling down. And I watched in Jersey City, N.J., where thousands and thousands of people were cheering as that building was coming down. Thousands of people were cheering." 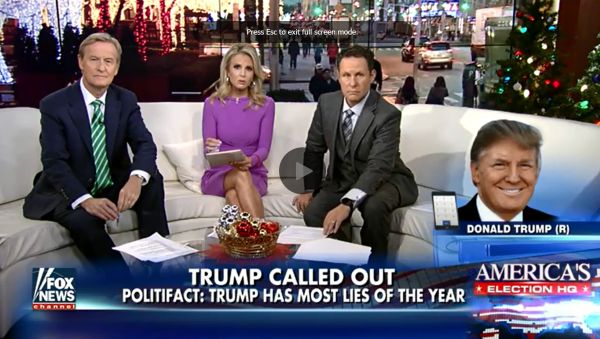 Elizabeth Hasselbeck: "I want to ask in fairness because on the heels of Hillary Clinton (and her claim about videos of Trump being used for ISIS recruitment) -- everyone agrees, and it's why she has problems in the polls with trust, that she has an issue with the truth, she's downright allergic to the truth. But PolitiFact also came out and said that you have the biggest lies and the most lies of the year. What's your response to them today for that?"

Trump: "Well, PolitiFact -- as an example, I've been proven right. You look at Breitbart, when I said they were dancing on rooftops, dancing in the streets, I'm right about that. There are many articles that say they were in New Jersey. And there are many articles that say that's true. And PolitiFact which is by the way is a totally left-wing group. They are bad news as far as checking. You can tell something 100 percent and they can make it out to a lie if you're a certain person. So PolitiFact didn't like the idea that I said dancing on rooftops, dancing in the streets. But that's been confirmed by hundreds of people."

Doocy: "Well maybe they took place but just maybe not in that number. That's where they're going after you."

Hasselbeck: "Does that make you adjust, and then think, okay, maybe if places like PolitiFact or other outlets are going to be fact-checking down to the number, will you not say thousands and hundreds in lump sum?"

Trump: "No, I don't want to adjust, because I don't know what the number is. I know that a lot of people saw it. I bet if you added it all up, it would be a hell of a big number. And all over the world they were dancing and they were celebrating. The only purpose in saying that was that there's something wrong when you have people that are celebrating the fall of the World Trade Center. And throughout the world, they were celebrating -- and nobody even disputes that. But they were also celebrating in New Jersey."

Then, co-host Brian Kilmeade brought up another claim that had featured prominently in the Lie of the Year article: "The Mexican government ... they send the bad ones over." PolitiFact rated that Pants on Fire.

Trump: "Well you know, the Mexican government absolutely, in my opinion, pushes people over the border because we take anybody, because we're run by stupid people. And Mexico sends bad people over -- there's no question about it. Hey look, nobody does better with Mexico than I do. Over the years I've employed thousands and thousands of Mexicans and Hispanics. And they're great people. They're fantastic people. But when there's problems, I think that some of the people sent over the border are sent over by Mexico. …"

At the time of the Lie of the Year selection, PolitiFact rated 76 percent of the comments by Trump that were checked Mostly False, False or Pants on Fire, out of 77 statements checked. No other politician has as many statements rated so far down on the dial.