George Stephanopoulos questions Donald Trump about his plan to send back Syrian refugees if elected president on the Oct. 4, 2015, edition of ABC "This Week." (Screengrab)

Says Marco Rubio has "the worst voting record there is today."

In one of many heated exchanges during the second Republican primary debate, Trump mocked Florida Sen. Marco Rubio’s poor attendance record in the Senate after Rubio schooled Trump on his lack foreign policy knowledge.

Rubio admitted that he didn’t have the best attendance record and suggested that’s because he’s focusing on something more important: the White House. We wondered if Rubio really has missed the most Senate votes in the GOP field.

Trump’s accurate if we look at the number of votes missed this year out of the five current senators running for president. Rubio has missed about a third of all votes.

If we look at career truancy records, Rubio is a close second to Texas Sen. Ted Cruz among the current field.

Donald Trump on Sunday, August 16th, 2015 in an interview on "Meet the Press"

Says "if the (Iran nuclear) deal gets rejected, they still get" $150 billion.

Whether Congress approves it or not, Iran will still reap all the financial benefits of the nuclear deal, Trump said on NBC’s Meet the Press Aug. 16.

When asked by host Chuck Todd how he would work with the Iran deal if he becomes president, Trump, running for the Republican nomination, said he would be "tough" on the contract, but it would be hard given all the money Iran would already have acquired as a result of the deal.

"The problem is by the time I got in there, they will have already received the $150 billion," Trump said. "Do you know if the deal gets rejected they still get the money?"

We decided to to check both claims about the money and, if it still goes to Iran, if Congress rejects the deal.

Experts told us that even if Congress rejected the nuclear deal -- thus maintaining current U.S. sanctions -- other countries could stop enforcing their own sanctions anyway. As a result, Iran would be able to access at least some of its assets that have been frozen under international sanctions. However, experts said it’s highly unlikely that this would amount to $150 billion, the maximum estimate of how much Iran could benefit by the lifting of all international sanctions without regard to Iran’s outstanding financial obligations. Without United States participation, the best estimate we could find was $40 billion.

Trump’s claim is partially accurate but cherry-picks the high end of estimates for the unfrozen assets.

We rated Trump’s claim Half True.

Donald Trump on Tuesday, September 8th, 2015 in a tweet

"Jeb’s policies in Florida helped lead to its almost total collapse," Trump tweeted on Sept. 8, 2015. "Right after he left he went to work for Lehman Brothers — wow!"

For this fact-check, we looked at Trump’s claim that Bush’s policies as governor led to financial ruin in the Sunshine State.

Bush has made repeated boasts about spikes in job growth and cuts in taxation and spending. But he also was fortunate to leave office just as the economy was starting to falter.

The state’s housing market, which had skyrocketed even more than the rest of the nation, cratered in the aftermath. Florida eventually lost 1 million of the 1.33 million new jobs that were created during Bush’s tenure. Many critics, like Trump, have said Bush can’t take credit for the party without accepting the blame for the hangover.

Economists told us the Great Recession was precipitated by a housing bubble that grew out of multiple factors, including policies on all levels of government.

While Bush’s actions as governor may not have done anything to prevent the financial crisis — some experts said he could have worked to throttle down the overbuilding — all agreed he did not cause the recession.

Donald Trump’s presidential campaign was forced to address a widespread allegation of hypocrisy this week, and it had nothing to do with his former liberal ways or his company’s overseas investments.

Much worse. Social media posts claimed his unmistakable, sometimes ironically worn "Make America Great Again" hats are not made in the USA. 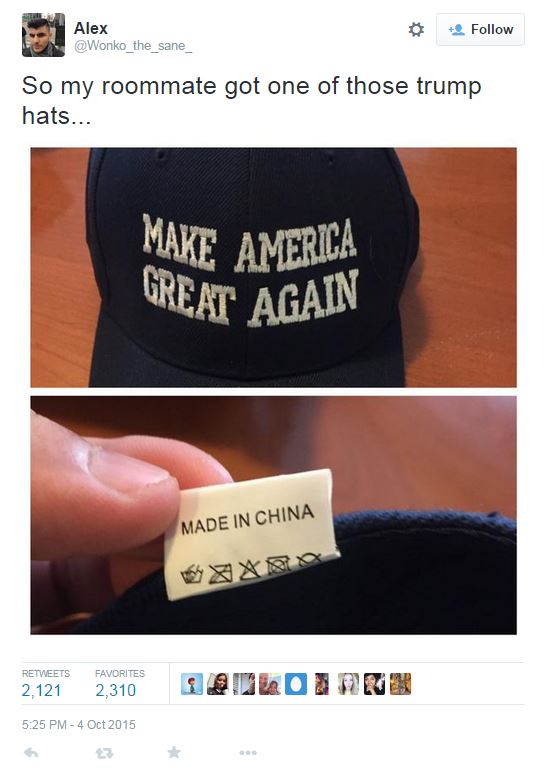 Made in China?! Say it ain’t so, Donald.

Hold onto your plastic snap enclosure. It’s not true.

The hat that launched a barrage of snarky social media posts after its July debut at a Texas campaign event has also launched a host of imitations.

"The image you shared is not an official campaign product," Trump spokeswoman Hope Hicks told PunditFact in an email. "All product for sale on DonaldJTrump.com is made in the USA."

Those hats that are the focus of the tweets are knockoffs.

Trump has even trademarked the phrase "Make America Great Again." Trump’s hats are made by a California company that says they are, indeed, American made.

We rated the claim Pants on Fire!

State Public Service Announcement
stated on December 28, 2015:
By the end of 2015, more than 1,300 people will have died on Georgia roads. One of out evey four fatalities resulted from drunken driving.

Charlotte Nash
stated on November 17, 2015 a statement:
Since 2008, Gwinnett County’s population has grown 15 percent, while the county government staff has increased only 1 percent.

Viral media reports
stated on November 9, 2015 social media and in print:
Drinking champagne could help prevent Alzheimer’s and other forms of dementia.

Kiplinger.com
stated on October 26, 2015 press release:
Georgia is one of the 10 most tax-friendly states for retirees.

Don Francis
stated on October 28, 2015 an interview with Watchdog.org:
Electric car sales in Georgia have dropped dramatically since a $5,000 tax credit was eliminated and a $200 annual registration fee was imposed July 1.

Centers for Disease Control
stated on October 22, 2015 map:
Georgia has the highest flu activity in the country.

ESPN
stated on September 27, 2015 in an article:
Alabama’s Crimson Tide will be the underdog in Saturday’s game against the Georgia Bulldogs, the first time in 72 consecutive games that Alabama has not been favored by oddsmakers to win.

Butch Conway
stated on September 16, 2015 press conference:
The racial and ethnic makeup of the Gwinnett County Sheriff’s Office mirrors the community it serves.

Casey Cagle
stated on September 8, 2015 press release:
"Eighty-three law enforcement officers have died in the line of duty this year. Twenty-four of them were shot and killed in cold blood."

Richard Woods
stated on September 2, 2015 press release:
Georgia’s CRCT "set some of the lowest expectations for student proficiency in the nation."

Melissa Johnson
stated on August 6, 2015 a report:
Georgia has the 9th highest rate of adults, ages 18 to 64, without a high school diploma or GED.