So you want to move to Canada, eh?

Every four years, a new crop of voters threatens to move out of the United States — namely Canada for liberals — if candidate So-and-So wins the presidency. But who actually does? (iStockPhoto)

The refrain comes up every four years, no matter who’s running.

If Donald Trump becomes president, actress Lena Dunham says she’ll move to Canada. Comedian Jon Stewart says he’ll leave planet Earth. For his part, Trump said this week that if he wins and Dunham, Stewart and others actually leave, he will have done "a great service to our country." 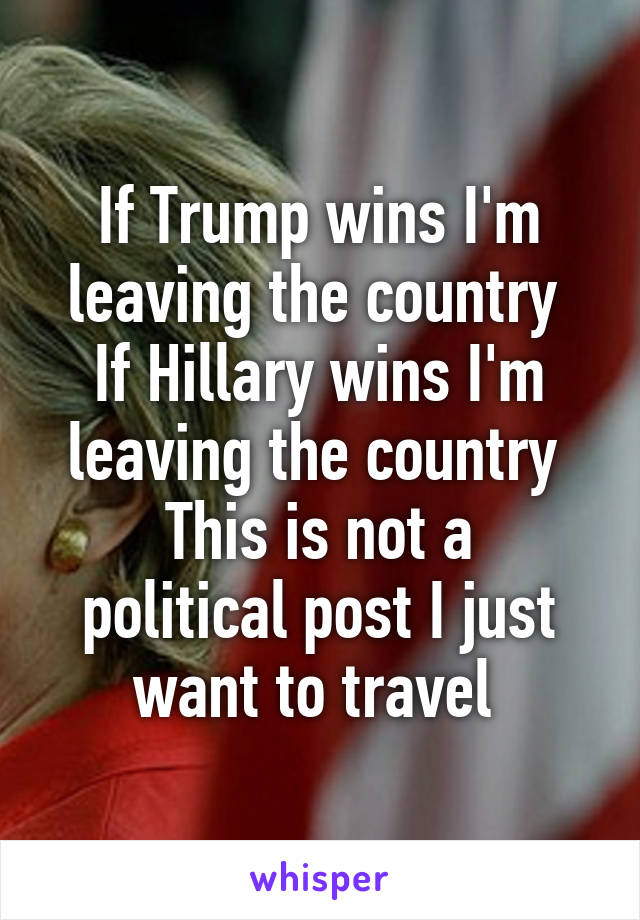 The threats aren’t limited to Trump-haters. The pro-Bernie Sanders Facebook page "If Hillary Clinton wins, I’m moving to Costa Rica" has about 200 likes. Fox News pundit Bill O’Reilly said if Sanders wins, he’s moving to Ireland. Back in 2012, some supporters of Republican presidential candidate Mitt Romney said they would move to Australia if Barack Obama won re-election. Conservative radio host Rush Limbaugh said he would leave for Costa Rica if the Affordable Care Act passed. (It did. He’s still here.)

But the cliche destination-of-choice for left-leaning individuals (and occasionally some Republicans) has, for the past few election cycles, been our neighbor to the north. Canada has universal health care, stricter gun laws and other policies liberals tend to support.

More people searched the phrase "move to Canada" on March 2, the day after the Super Tuesday primary election, than ever in Google history. The last spike was in 2004, when George W. Bush won re-election.

Priorities USA Action, a pro-Clinton super PAC, this week launched the website dontmovetocanada.com, urging Americans to stay, vote for Clinton and "save America" instead.

However, it seems unlikely that a significant number of people make good on their threat to leave the country every four years. We don’t know for sure, though. The American government doesn’t track how many people leave in a given year.

Using Canadian government statistics, we found that there was a dramatic increase in the number of U.S. citizens granted permanent resident status in Canada in the years immediately following Bush’s re-election. It nearly doubled from about 5,000 grantees in 2002 to 10,000 in 2008.

Because the Canadian government doesn’t track why people are moving, we don’t know the reason behind the surge.

While noting that most Americans who move to Canada go for work, not for politics, it’s possible the surge was a lagging effect of Bush’s re-election, said Jeffrey Reitz, director of ethnic, immigration and pluralism studies at the University of Toronto.

There are at least a few anecdotal examples of Americans fleeing to Canada in the wake of Bush’s re-election in 2004. The Guardian talked to several such couples, including Pam and David Drucker, who made a pact that they would build their dream house in Vermont if Democrat John Kerry won, but if Bush won, they would move to Canada. They moved to Vancouver a year later.

It’s hard to up and move to another country, Canada or otherwise.

Like the United States, other countries limit the number and types of immigrants they will accept each year, and it’s a time-consuming process. A  hopeful émigré has to have a reason to leave besides not liking the new American president.

To immigrate to Canada, a reason could be having close family living there or a Canadian spouse willing to sponsor an immigration visa. The Canadian government also evaluates the potential economic contribution of permanent resident applicants, like whether there is a job opportunity awaiting them in Canada. The government also considers education level and language skills.

"In short, any American who plans to move permanently to Canada if Donald Trump is elected better check to see if they can get in, and expect to wait a long time — at least months, if not years — before they get permission," said Stephen Kelly, a former American diplomat in Canada and a visiting professor at Duke University. "Who knows, it might take so long Trump’s first term would be over before they get in."

Adam Alter, a psychology and marketing professor at New York University, has written in The Washington Post and The Atlantic that the vast majority of people who make these threats won’t ever act on them. People tend to far overestimate how upset they will be if a dreaded outcome occurs, including when a candidate they oppose wins. Alter cited research from the 1994 Texas governor's race and the 2008 presidential election showing that people ended up about as happy or sad as they were before the election, despite predicting significant changes if their preferred candidate won or lost.

"The good news, then, is that a Trump victory in November will distress his critics less severely and more briefly than they imagine," Alter wrote. "And most of them will go on, like thousands of disappointed voters do every four years, living the same lives in the same country they inhabited before Nov. 8, 2016."

Politico, "Trump: Americans will thank me when Lena Dunham flees to Canada," April 26, 2016

Gawker, "How to Move to Canada If Trump Wins, By a Person Who Moved to Canada When Bush Won," March 2, 2016

Washington Post, "Here’s why you won’t really move to Canada if Trump wins in November," March 2, 2016

The Atlantic, "You're Not Moving to Canada: The Psychology of Post-Election Melodrama," Nov. 7, 2012

NPR, "Do Americans Really Move To Canada Because Of Politics?" March 30, 2016