Sen. Ted Cruz, shown here at a church in Bow, N.H., sent mailers to Iowa voters purporting to show crummy participation in past elections. Were the "scores" ginned up? (Getty Images photo).

They can also go too far.

Perhaps worse, inquiries by Mother Jones and The New Yorker suggest the mailers may have ginned up how often each recipient and his or her neighbors -- identified in each mailer by name -- voted in past elections.

Message: You have a lousy voting history just like your neighbors (but, unsaid, these figures might be made up).

We emailed several Cruz aides about how Cruz reached the voter scores and letter grades shown in the reporter-sampled mailers, fielding no reply.

Cruz himself said in Iowa: "I will apologize to no one for using every tool we can to encourage Iowa voters to come out and vote."

In this story, we’re describing the Cruz mailers and sharing the analysis of an Iowa political scientist who, at our request, built a spreadsheet signaling a disconnect -- at the least -- between voter participation according to Iowa’s state-collected voter files and the percentage scores shown for 20 voters named in the Cruz mailers. (How many voters got a mailer? We don't know.)

At the top of each mailer, in a bold red box, are the words "VOTING VIOLATION." To be fair, it’s also clear the mailer has been sent by Cruz’s Houston-based campaign.

Then comes an explanation:

‘You are receiving this election notice because of low expected voter turnout in your area. Your individual voting history as well as your neighbors’ are public record. Their scores are published below, and many of them will see your score as well. CAUCUS ON MONDAY TO IMPROVE YOUR SCORE and please encourage your neighbors to caucus as well. A follow-up notice may be issued following Monday’s caucuses.’

Keep going down the mailer and you’ll see a chart showing the names of the recipient of the mailing and her or his neighbors alongside their respective letter "grade" and "score."

A Jan. 30 New Yorker article says Cruz’s campaign seems to have made up the personal voting histories -- and letter grades -- presented in mailers sampled by its correspondent, Ryan Lizza.

Lizza’s story led us to contact David Peterson, an Iowa State University political scientist who says he received one of the Cruz mailers. After we called, Peterson emailed us a copy of what he says he got, though he also covered the names of six neighbors -- to protect their privacy, he said. Still in view are the neighbors’ ‘F’ letter grades and 55 percent scores: 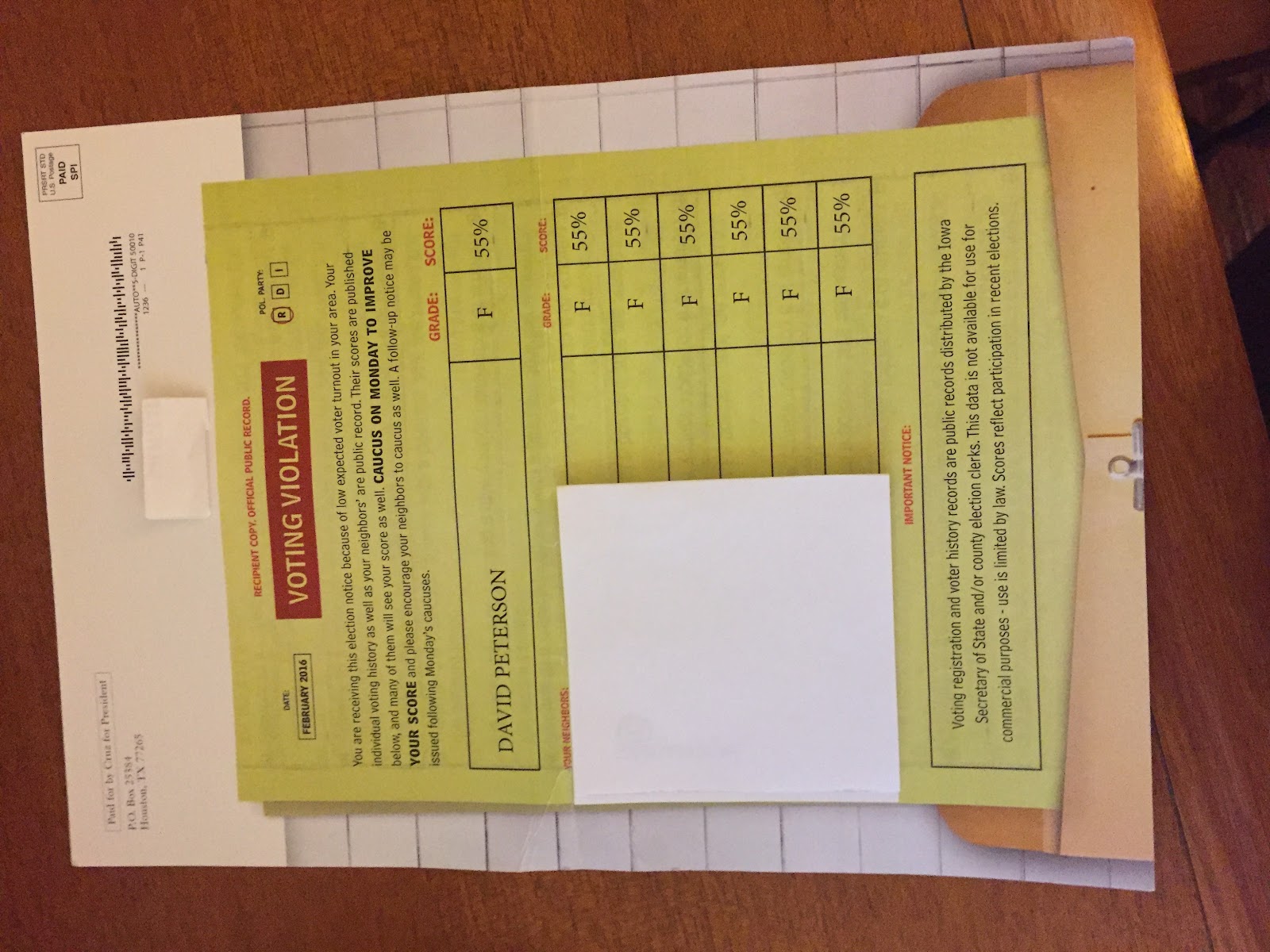 By phone, Peterson agreed it’s not unusual for candidates or political groups to encourage turnout using targeted leaflets that nudge voters about their past participation in elections. (See more on how this kind of "shaming" drives up turnout toward the end of this pre-caucus news blog by Jonathan Tilove, the Austin American-Statesman’s chief political writer.)

What was novel in Cruz’s missives, Peterson told us, was the naming of individual voters/neighbors tied to specific mostly crummy scores and letter grades -- particularly, Peterson said, because it didn’t look like the published participation percentages could be backed up by the state’s voter files obtainable from the state.

Speaking personally, Peterson said that since he moved to Iowa from Texas in 2009, he’s voted in three of three general elections and two of three party primaries, which would break out to an overall election participation rate of 83 percent, not 55 percent.

Generally, Peterson said, "there’s no way it’s mathematically possible to calculate these numbers" in the sampled mailers "from the Iowa voting lists." (See more from Peterson about his math point here.)

"That’s the part that displeases me as both an academic and frankly as an Iowan," Peterson said, "that the Cruz campaign gave out factually incorrect information about my neighbors."

His speculation: Whoever prepared the mailers was "mind-numbingly lazy."

At our request, Peterson created a spreadsheet comparing the participation scores declared for 20 voters named in Cruz's mailers to data Peterson says he drew from Iowa’s voter files covering participation in state and local elections through November 2012. Peterson said he drew the voters from the mailer he received and others posted by and Austin-based Sarah Rumpf and others.

A note: Without more information, there' s no precise way to gauge how each voter's "score" was worked up. We don't know unless Cruz says.

But according to Peterson's breakdown, there are reasons to doubt Cruz's team drew on actual participation rates. For instance, his spreadsheet shows, 1 of the 17 voters given scores of 55 for election participation in the mailers, perhaps truly meriting a grade of ‘F,’ actually voted in no elections. Conversely, the sampled voter with the highest Cruz-bestowed score, 75, had actually voted only once, according to the spreadsheet. Two other voters who saw personal scores of 65 on their mailers; the state voter file indicates one had voted four times, the other seven.

The remaining 16 voters, all given scores of 55 in the mailer, had previously cast ballots in from one to 22 elections, Peterson reported. The voter with 22 trips should probably be treated as an outlier in that the Iowa voter file unusually tracks his or her voting all the way back to 1994 while the other checked voter histories in Iowa's records start from the 2000s.

Let's remove from our analysis the voter with the 22 trips to the polls. The other 19 voters, on average, had previously voted nearly four times each, according to the spreadsheet. How Cruz's camp got to 55 scores for all but three of them can't be determined unless we know its equation.

Another curiosity: Only five of the 20 mailer-fielding voters reviewed by Peterson were identified as registered Republicans in the state voter file; eight were listed as registered Democrats, seven were shown with no party affiliation, according to the spreadsheet. (Why send a Democrat a flier intended to spur a vote in the Republican caucuses? We don’t know.)

We edited the professor’s spreadsheet to remove information not relevant to his comparison of participation histories. See our version here.

"Today I was shown a piece of literature from the Cruz for President campaign that misrepresents the role of my office, and worse, misrepresents Iowa election law. Accusing citizens of Iowa of a ‘voting violation’ based on Iowa Caucus participation, or lack thereof, is false representation of an official act. There is no such thing as an election violation related to frequency of voting. Any insinuation or statement to the contrary is wrong and I believe it is not in keeping in the spirit of the Iowa Caucuses.

When we inquired, the day after the caucuses, Pate was unavailable for an interview.

We’ll update this story should Cruz share how his team reached its figures for each voter's "score" or illuminate his approach in other ways.

Blog post, Sarah Rumpf, "He Said He Was An Undecided Iowan Until He Received This Controversial Mailer From Ted Cruz," the Independent Journal, Jan. 30, 2016