7 Hillary Clinton quotes on the Internet that are complete fakes

A reader asked us to check several Internet graphics that purport to be quotes from Hillary Clinton. So we took a closer look.

One of our cardinal rules here at PolitiFact is: Never assume that something you see on social media is accurate.

That’s certainly the case for graphics purporting to show quotes by Hillary Clinton.

A reader recently collected several of them and asked us to check how accurate they were. All of them have been fabricated.

We’ll assess them below, one by one.

"I will get the NRA shut down for good if I become president. If we can ban handguns, we will do it." -- Hillary Clinton, interview with the Des Moines Register, Aug. 8, 2015: 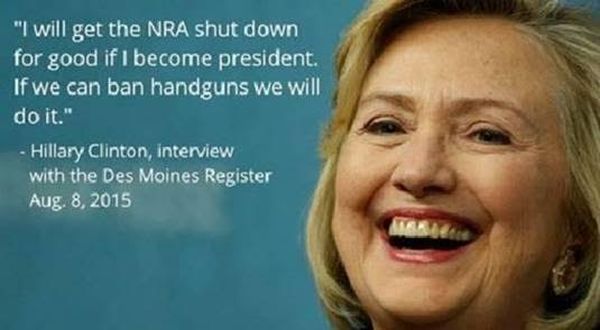 This quote is a fabrication.

PolitiFact Iowa -- a partnership between PolitiFact and the Des Moines Register -- gave it a Pants on Fire rating. "Clinton was never quoted in the Register making that statement, and it appears she has not made such a statement anywhere else," PolitiFact Iowa wrote.

Not only that, but Clinton wasn’t even in Iowa on Aug. 8, and was not interviewed by the Register on that date.

"Clinton was quoted in the Des Moines Register several times about gun control in the months leading up to the Iowa caucuses, but she did not say what the post accuses her of saying," PolitiFact Iowa wrote. "Clinton has not advocated for shutting down the NRA or banning handguns outright." 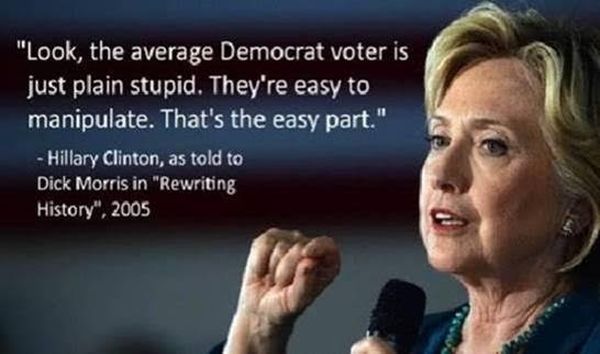 Snopes.com has debunked this alleged quote. It too seems entirely fabricated.

"The above-displayed message was not uttered by Hillary Clinton and was not published in the 2005 book Rewriting History by Dick Morris," according to Snopes. "We found no record of the quote in any major publication. In fact, the first mention of this quote came in October 2015, more than a decade after Morris' book was published, on a Tumblr page dedicated to generating fake Hillary Clinton quotes." 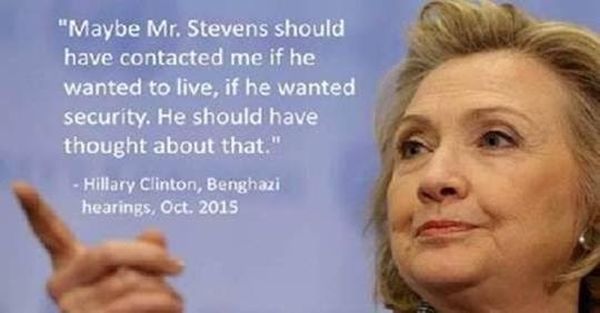 Clinton addressed this issue in her Benghazi testimony, but never spoke these words.

Clinton did not say anything so snarky about the late U.S. Ambassador to Libya, Chris Stevens, during her testimony before the House Benghazi committee in October 2015. Stevens was one of four Americans to die in the terrorist attack on a U.S. complex in Benghazi, Libya, in September 2012. Critics have charged that Clinton bears responsibility for their deaths.

The closest statement we could find in Clinton’s actual testimony was this one:

"Well, it's the same answer I've been giving all day. Chris Stevens had an opportunity to reach me directly any time he thought there was something of importance. The people with whom he worked -- the people who were around him and with him -- they very well understood the dangers that they were confronting, and they did the best they could under the circumstances and many of the security requests, as I just detailed, were agreed to. Others weren't."

There’s some overlap in substance between the two quotes, but the tone of her actual testimony is significantly softer.

"Yeah, I got him off. So what? Who cares? We get the evidence thrown out, so he walked. (Laughs) I mean, sure, we knew he did it. (Laughs) But it didn't matter." -- Hillary Clinton, audio recording from 1982 discussing a child rapist she defended when she was a criminal defense attorney in Arkansas. 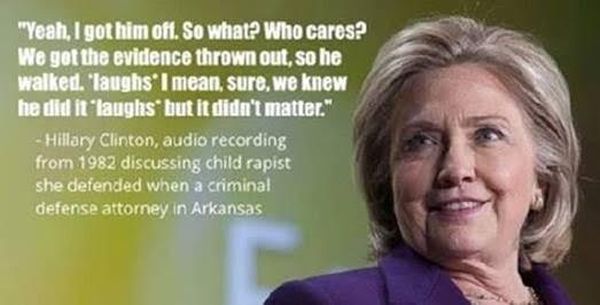 Clinton didn’t speak these words, either, though the quote refers to a real episode in Clinton’s early legal career in Arkansas.

When Clinton was 27, she defended a man accused of the rape of a 12-year-old girl in rural Arkansas. The case resurfaced in June 2015, when the Washington Free Beacon, a conservative publication, posted a previously unreleased interview Clinton gave in the 1980s. (We have checked one claim related to this topic.)

Here’s what the Washington Free Beacon wrote about the interview when it first released the tapes:

"Describing the events almost a decade after they had occurred, Clinton’s struck a casual and complacent attitude toward her client and the trial for rape of a minor.

" ‘I had him take a polygraph, which he passed – which forever destroyed my faith in polygraphs,’ she added with a laugh.

"Clinton can also be heard laughing at several points when discussing the crime lab’s accidental destruction of DNA evidence that tied (the defendant) to the crime."

However, neither the recorded excerpts that were posted online nor the articles written about the release of the tapes mentioned the quote offered in the meme. Though some may second-guess Clinton’s decision to take the case or her "casual" pose in the interview, the quote in the meme is much more dismissive in tone than anything she actually said in the interview. 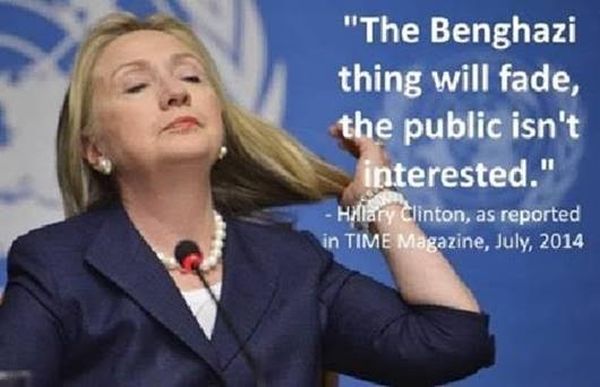 There’s no evidence that Clinton was ever quoted saying this -- whether in Time or anywhere else, based on Google and Lexis-Nexis searches.

"I believe the primary role of the state is to teach, train and raise children. Parents have a secondary role." -- Hillary Clinton, It Takes a Village 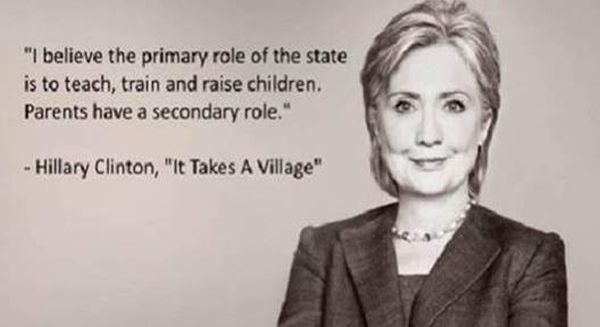 Clinton’s high-profile book does not include this quote.

Clinton’s 1996 book caused controversy among some critics who saw her as arguing that society, not parents, were responsible for raising children. This meme seems to stem from that belief.

However, Clinton and her allies have long argued that critics have misunderstood her message, saying that she didn’t advocate for society to usurp the roles of parents, but rather that she saw a role for other individuals -- including other family members, neighbors, teachers, pastors and others -- to have a positive, additive role in raising children.

In any case, we searched the text of her volume on Google Books and searched for this quote on Google and Lexis-Nexis and failed to find it.

"I don't give a f*** about them. Get them out of here and get them away from me." -- Hillary Clinton, talking about Secret Service agents, in First Family Detail by Ron Kessler. 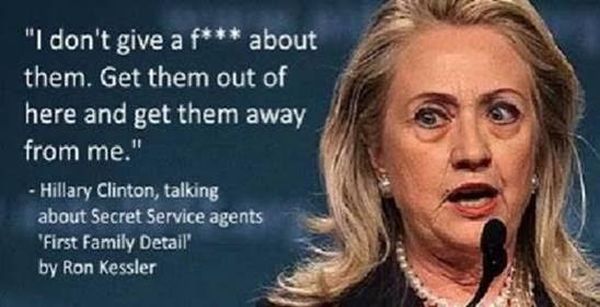 We found weak evidence, at best, for Clinton ever having said this.

We couldn’t track down this exact quote, but the urban legends site Snopes.com had some similar, profanity-laced comments allegedly spoken by Clinton over the years, some of them sourced to Kessler’s book and others to other authors.

The posts that offered this quote cited as their source a 1996 book by former FBI agent Gary Aldrich, Unlimited Access. The book, among other things, accused President Bill Clinton sneaking out of the White House for trysts at a nearby hotel. It was greeted with wide skepticism and fierce denials by the Clinton family and other officials.

Daily Mail, "'I never trusted a polygraph again': Hillary Clinton LAUGHS in 30-year-old interview as she recalls how she helped a suspected child rapist walk free after the prosecution lost crucial evidence," June 16, 2014

PolitiFact, "Did Hillary Clinton ask to be 'relieved' from representing an accused rapist in 1970s?" July 17, 2014