Where are Ted Cruz’s Muslim neighborhoods?

After the terrorist attacks in Brussels, Sen. Ted Cruz of Texas said the U.S. should help its European allies to fight "this scourge" and "redouble our efforts to make sure it does not happen here."

Cruz, lately the No. 2 candidate for the Republican presidential nomination, also revisited his calls to "secure" the U.S.-Mexico border and "halt the flow of refugees from countries with a significant al Qaida or ISIS presence."

But he also offered a new idea, saying: "We need to empower law enforcement to patrol and secure Muslim neighborhoods before they become radicalized."

Wait. The U.S. has Muslim neighborhoods?

In a subsequent interview by CNN’s Anderson Cooper, Cruz reformulated, saying: "If you have a neighborhood where there's a high level of gang activity, the way to prevent it is you increase the law enforcement presence there and you target the gang members to get them off the streets. I'm talking about any area where there is a higher incidence of radical Islamic terrorism."

That seems distinct from targeting Muslim neighborhoods. Then again, we’re presuming Cruz didn’t mean Wall Street or the streets near the Pentagon. Could he solely mean San Bernardino, California? We'll guess not.

We're not rating the wisdom of Cruz’s call. But we did wonder if it's possible to pinpoint U.S. neighborhoods as Muslim.

No doubt, some American communities are home to a greater share of Muslims than others.

According to a 2003 U.S Census Bureau report, some 30 percent of the population of Dearborn, Mich. was of Arab descent -- "by far the largest proportion" of Arab residents "among places of similar size," meaning cities with less than 100,000 total residents, the report said. The same city, by the way, was home to an anti-ISIS march in December 2015, FactCheck.org noted.

The bureau report said: "California, (with Burbank, Glendale, and Daly City), and New Jersey, (with Jersey City and Paterson), also had more than one city of 100,000 or more population among the places with the highest proportion" of  Arab residents.

It’s fair to assume, we suppose, that many Arab residents are Muslim by faith.

So, it stands to reason there may indeed be Muslim neighborhoods. Still, aren’t most Americans jumbled up? Don’t we live where we do regardless of particular faiths or beliefs?

If the government endeavored to ID communities by religion, it couldn’t draw on Census data; the bureau doesn’t inquire into religious preferences.

We asked the nonpartisan Pew Research Center about identifying Muslim neighborhoods. A spokeswoman, Anna Schiller, said by email it hadn’t done such research. Still, she pointed out an ongoing effort to track churches, temples and mosques by the Association of Statisticians of American Religious Bodies.

From that source, we downloaded this map showing estimated raw counts, as of 2010, of Muslim "adherents," revealing greater raw totals in big cities ranging from Houston, Dallas and  Austin to San Diego, Calif., Chicago and cities on the eastern seaboard. 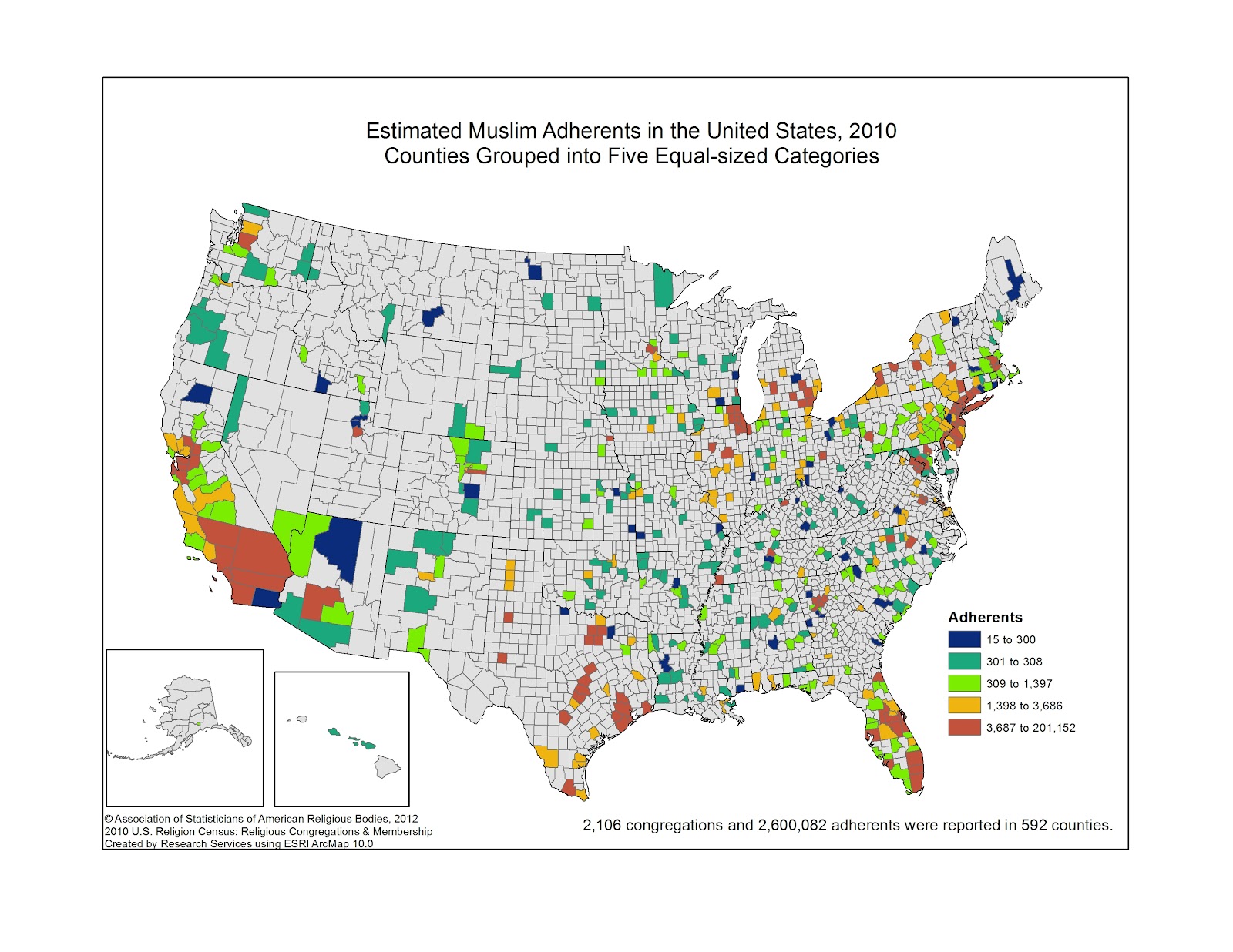 Of course, the map doesn’t signal that Muslim believers are living in specific neighborhoods.

By phone, Elibiary, who said he’s of Muslim faith and an independent Republican poised to attend this spring’s Republican Party of Texas convention, told us: "The reality is there are no Muslim neighborhoods, especially here in Texas. We don’t really have ethnic enclaves like that."

Reminded of the map showing concentrations of Muslim adherents, Elibiary said: "You end up finding diversity in the large counties. It has nothing to do with being Muslim."

LAPD and NYPD each tracked Muslims

Elibiary pointed out a couple of failed police efforts to map U.S. Muslims.

A decade ago, the Los Angeles Police Department attempted to devise an enforcement program singling out Muslim neighborhoods. According to a November 2007 New York Times news story, LAPD scrapped the plan to map Muslim communities in response to an outcry among Muslims and others who said the project amounted to racial profiling.

A deputy chief, Michael P. Downing, had testified the initial plan was to work with a Muslim partner and an academic institution to determine the geographic distribution of Muslims and "look at their history, demographics, language, culture, ethnic breakdown, socioeconomic status and social interactions." In a later interview, Downing said the problem that some Muslims have integrating in Europe had been a source of radicalization and the point would be to try to avoid that in Los Angeles.

"But Muslim groups immediately objected — not least on the ground that unlike in much of Europe, Muslims did not live in their own separate neighborhoods in the United States. In addition, there have been virtually no cases of the kind seen in Europe, they said, where a native son flies off to Pakistan or Afghanistan for training and then returns to create a homegrown terrorist cell that carries out deadly attacks."

Earlier, after 9/11, the NYPD dispatched undercover officers into minority neighborhoods as part of a human mapping program, The Associated Press revealed in news stories published in 2011-12. The AP said police also used informants, known as "mosque crawlers," to monitor sermons, even when there was no evidence of wrongdoing.

Police subjected entire neighborhoods to surveillance and scrutiny, the AP found, often because of the ethnicity of the residents, not because of any accusations of crimes. Hundreds of mosques and Muslim student groups were investigated and dozens were infiltrated, the AP reported.

In August 2012, the AP reported that in more than six years of spying on Muslim neighborhoods, eavesdropping on conversations and cataloguing mosques, the department's secret Demographics Unit "never generated a lead or triggered a terrorism investigation."

In New York on Tuesday, Cruz said he’d bring the program back, offering this characterization: "New York had a proactive policing program that Mayor Michael Bloomberg championed to work cooperatively with the Muslim community to stop radical Islamic terrorists."

We asked Cruz’s campaign for relevant data behind his "Muslim neighborhoods" idea and how his envisioned patrols would work. We’ll update this story if we hear back.

Press release, "Cruz: We Can No Longer Surrender to the Enemy Through Political Correctness," Ted Cruz presidential campaign, March 22, 2016