Donald Trump says he doesn't invest in the stock market. Here's his portfolio

A view of the New York Stock Exchange from Wall Street. (Wikimedia Commons)

Donald Trump raised eyebrows during an interview with CNBC when he said that Federal Reserve Board chair Janet Yellen -- a Senate-confirmed appointee who is supposed to run the central bank independently -- is "obviously political and doing what (President Barack) Obama wants her to do."

Trump then suggested that the long, post-recession run of low interest rates, currently overseen by Yellen, is creating a "false market" with "essentially free" money.

"I don’t invest in the stock market," Trump continued during the Sept. 12, 2016, interview. "And I think you saw the stocks I bought, and I bought a lot of stock, and I am not a stock market guy, and I bought it because I did not use borrowed money when I invested."

This exchange was somewhat rambling -- and the Trump campaign did not respond to a request to elaborate for this article -- but Trump appears to be saying that he was once invested in the stock market but doesn’t do so today. When he says, "I don’t invest in the stock market," he’s using the present tense.

The form in question is the Executive Branch Personnel Public Financial Disclosure Report, also known as OGE Form 278e. Trump has touted his 92-page submission as a reason why it’s not important to see his tax returns. (We expressed substantial skepticism about that argument.) Except for Trump, all presidential nominee since 1980 have released their tax returns well before Election Day.

In his financial disclosure form, Trump included 11 pages packed with small type as "other assets and income." And these pages are chock full of blue-chip companies along with current values and income paid out. Here’s one of the 11 pages: 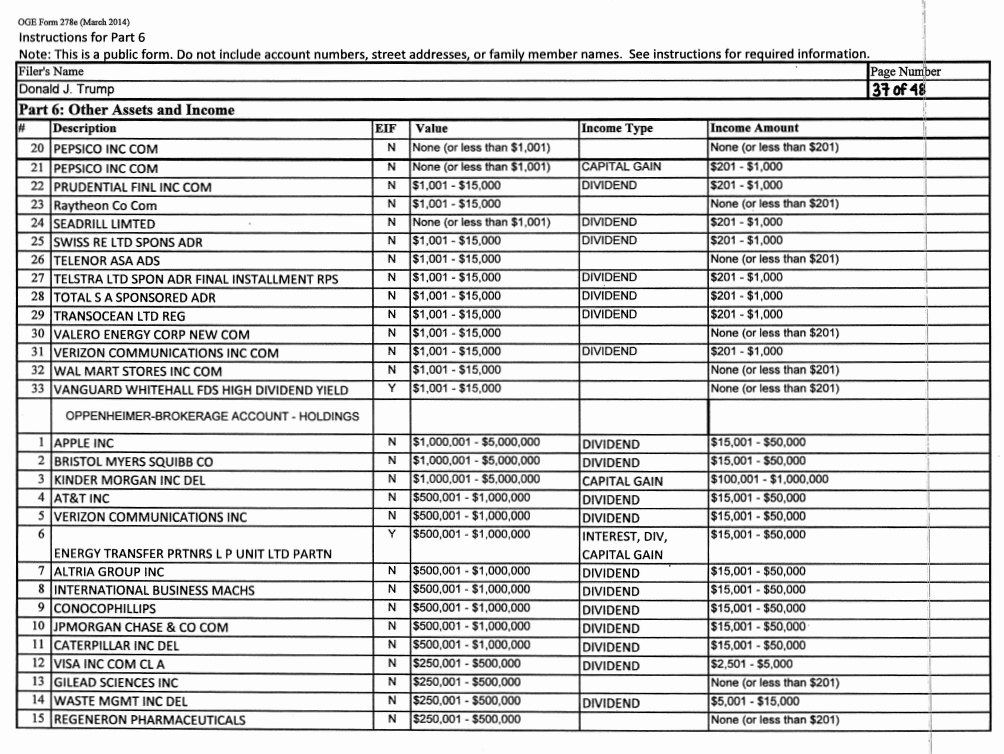 According to the form’s instruction sheet, the period for reporting assets is the preceding calendar year plus the current year to the filing date, which in Trump’s case was July 15, 2015.

There’s one possibility that could make Trump’s statement correct -- if he sold off all of his holdings since July 15, 2015. Nothing of the sort has been reported, and his campaign didn’t comment. But due to this theoretical possibility, we won’t put this statement to the Truth-O-Meter.

That said, we took a closer look at the holdings Trump had as of 14 months before the CNBC interview.

The disclosure form allows the candidate to quantify their holdings’ values in broad ranges, such as "$1,001 to $15,000," or "over $5 million." To be cautious, we calculated the value of Trump’s disclosed stock-market holdings as the minimum number in the stated range. In all likelihood, the values are probably somewhat higher, if not significantly higher.

Experts told us that companies listed with a "dividend" are stocks, whereas those marked with "interest" are bonds. So we excluded the values and income associated with bonds from our calculations. We did include "capital gains," which are often from stocks but could be from bonds instead. However, we excluded the value of cash holdings and mutual funds, even though it’s possible that those mutual funds are in turn based on stock market holdings.

So, given these caveats, our estimate of Trump’s stock market holdings is $12 million in stock value and $12 million in income received from dividends or capital gains during the year-and-a-half reporting period. Excluding capital gains from these figures would bring down the number, but in all likelihood his holdings and income figures are higher, since we used the lowest possible dollar estimates for each of his hundreds of holdings.

The list of companies in Trump’s form is a who’s who of Fortune 500 companies, many of them with familiar brand names. Trump’s holdings included at least $1 million in Apple and Bristol Myers Squibb, at least $500,000 in AT&T, Verizon, Altria, IBM, ConocoPhillips, Caterpillar, and JPMorgan Chase, and at least $250,000 in Visa, Waste Management and Microsoft.

"These are publicly traded companies," said Lawrence White, an economist at New York University’s Stern School of Business. "If Mr. Trump received a dividend payment, then he must have owned shares of stock in that company -- that is, he was invested in the stock market."

The $24 million estimate we arrived at may account for a modest share of Trump’s net worth compared to the companies and properties he owns -- while his net worth is hard to pin down, it’s believed to be in the billions of dollars. Trump’s stock holdings may be a rounding error for someone of his wealth, but it’s a lot bigger than most Americans’ investments in the stock market.

Bottom line: If it’s correct that Trump doesn’t "invest in the stock market," then that must have happened after he became an official candidate.

CORRECTION, Sept. 16, 2016: An alert reader has pointed out that the disclosure filing Trump filed was dated July 15, 2015, not July 15, 2016, as we had initially reported. This means he would have had more time to sell off his stock holdings than we had initially indicated. The article has been changed to reflect the new date.