Among the most significant changes to the Senate GOP health care bill is a move championed by Sen. Ted Cruz, R-Texas, to free insurers from the tight regulations under Obamacare.

The crux of the change is this: If an insurance carrier in a state offers at least one plan that complies with the current Obamacare regulations, it can offer other plans that don’t.

The result would be cheaper health insurance for people who are happy to buy less coverage than current rules allow. Young men wouldn’t have to pay for maternity care, for example. Healthy people in general would gain because insurance companies could set premiums based on health status, something they can’t do today.

Cruz said the bill "ensures consumers have the freedom to choose among more affordable plans that are tailored to their individual healthcare needs."

The conservative Heritage Foundation estimated that Obamacare rules have increased average premiums for young people by 16.5 percent. Eliminate those rules, the group said, and that’s how much they could save.

Democrats, however, say the change could negatively affect millions of Americans with pre-existing conditions.

"It leaves millions with pre-existing conditions out in the cold," said Senate Minority Leader Chuck Schumer, D-N.Y. "There will be virtually no real insurance for them."

What is Cruz’s amendment and how might insurance markets be affected? This PolitiFact Sheet will help explain.

The insurance market before and after

Before Obamacare, many insurance companies included clauses that shielded them from paying to treat problems that predated a new policy. This is what the pre-existing condition issue is all about.

Healthier people clustered in one part of the market. People at higher risk clustered in another, assuming they could afford insurance at all and could find a company to sell them a policy.

The regulations in the Affordable Care Act aimed to put everybody in the same pool. With every plan in compliance with those rules, it meant younger, healthier people paid more than they would have, and older, less healthy people paid less. The rules sparked anger that people were being forced to buy coverage for issues they didn’t have -- maternity care for guys is a textbook example.

So with that as a backdrop, the negative reaction to Cruz’s proposal from the health insurance industry reflects the experience they had before Obamacare.

The Association of Health Insurance Plans (AHIP), the leading industry group, warned in a policy brief of a fractured, unstable market, with skyrocketing premiums for the people most in need of care.

"This is particularly true for patients with pre-existing conditions — who would be most affected and potentially lose access to comprehensive coverage and/or have plans that were far more expensive."

The American Academy of Actuaries captured this scenario in a report with this graphic: 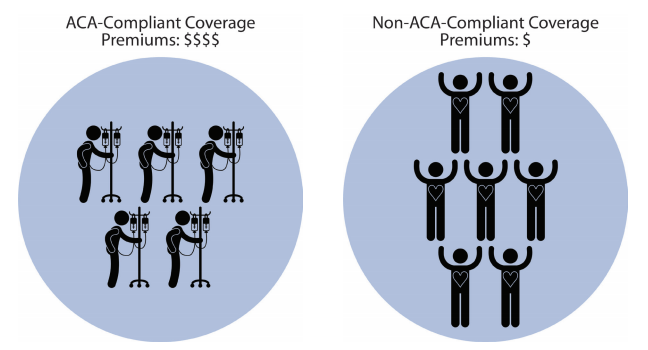 We spoke to analysts who work at the intersection of law and health insurance, and found few who disagreed with the AHIP assessment of Cruz’s plan.

Indiana University law professor David Gamage told us pricing would drive the market. ACA-compliant plans would offer complete coverage, but cost a lot. The other plans would cost less. Over time, people who didn’t expect to need care would flock to the cheaper plans.

Lower-income people would see some protections, thanks to tax credits for people making less than 350 percent of the federal poverty level. But "sicker people with incomes too high to qualify for tax credits would very likely pay more for coverage in absolute terms," Matthew Fiedler at the Brookings Institution said. For those people, Fiedler said he doubts that the Senate bill has enough money to keep pace with the rise in premiums.

The counter argument to this scenario envisions a blend of government subsidies and free-market innovation that makes premiums more affordable for most people.

Michael Cannon at the libertarian Cato Institute wrote in an op-ed that by forcing insurance companies to ignore the likelihood that someone will need care, the Affordable Care Act has driven up the cost of coverage and hurt most people.

"Absent Obamacare’s health insurance regulations, premiums would fall for the vast majority of Exchange enrollees by an estimated 45-68 percent," Cannon wrote. "It would allow insurers to reintroduce innovative products, which Obamacare effectively outlawed, that would reduce premiums a further 80 percent."

Cannon agreed that a "few million people would see their premiums rise," but expressed confidence that Washington would provide the funds to protect them.

"Republican lawmakers, the health insurance lobby, and tens of millions of voters would all be invested in making it work — and Democrats almost never say no to more taxpayer dollars for health care," Cannon wrote.

The Senate bill offers over $180 billion to balance out Cannon’s  free-market medicine. About $50 billion goes directly to the insurers. States dole out the rest, with some of that also likely to end up with insurance companies.

There is uncertainty, though, as to what the states will do if the Senate bill becomes law.

States in the driver’s seat

The Cruz amendment gives states the final word. They can set the rules for insurance companies and in theory, they could reimpose some or all of the limits in the Affordable Care Act for any policy sold within their borders. In a sense, the Cruz plan would be the default option, but states could usurp Cruz’s rules.

"We obviously don't know what each state will do if this passes," said Martin Gaynor, professor of economics and health policy at Carnegie Mellon University. "People with pre-existing conditions could find themselves in very different situations in the health insurance market depending on where they happen to live."

Joe Antos, a scholar at the market-oriented American Enterprise Institute, said it’s very unclear what the amendment’s impact would be. He argues that Obamacare changed people’s expectations and that political pressure at the state level for more regulation would be intense.

"The path we’ve taken has made it very difficult if not unacceptable to allow blatant abuse of people with pre-existing conditions," Antos said. "I wouldn't be surprised if a number of states went light on some aspects -- they might be more flexible with regards to essential health benefits. But some states, I think many, will say you can fiddle around with your benefits package but you still have to cover X, Y and Z."

But Allison K. Hoffman, a health law professor with the University of Pennsylvania, said it’s very difficult to re-regulate the insurance market a la carte.

"The Affordable Care Act has many interconnected parts," Hoffman said. "You couldn’t tell insurance companies to cover people with pre-existing conditions without including all of the other, or at least most of the other, elements that would make the market work."

States, Hoffman said, would be faced with passing comprehensive insurance reform. Hoffman said she is skeptical they will.

"If you look historically, we know that most states will not pass these laws," Hoffman said. "It’s a real political hot button. It would take a state undoing what the Republicans in Congress had just done."

Hoffman said the $180 billion in subsidies in the Senate bill could sway some states, but remains doubtful they could navigate the political cross-currents.