Trump says it’s a travel ban, despite what his own team says

Family members who have just arrived from Syria embrace and are greeted by family who live in the United States upon their arrival at John F. Kennedy International Airport in New York, Monday, Feb. 6, 2017. (AP Photo/Craig Ruttle)

Despite what his spokesman, administration officials, lawyers, courts and others call it, President Donald Trump has made it clear that his controversial immigration executive order is definitely a "TRAVEL BAN!"

"People, the lawyers and the courts can call it whatever they want, but I am calling it what we need and what it is, a TRAVEL BAN!" Trump tweeted June 5, just a few days after a federal appeals court blocked his directive and the Justice Department appealed the case to the U.S. Supreme Court.

People, the lawyers and the courts can call it whatever they want, but I am calling it what we need and what it is, a TRAVEL BAN!

But Trump administration officials have repeatedly claimed his order is not a travel ban as they have tried to defend the immigration order in courts. The March 6 executive order aiming to temporarily suspend travel of nationals from six Muslim-majority nations in the Middle East and Africa: Yemen, Syria, Sudan, Somalia, Iran, Libya. The March 6 directive is a revision of another order signed Jan. 27. Both orders were challenged in courts on claims that they are discriminatory.

Trump posted a series of additional tweets Monday morning about the travel ban:

"The Justice Dept. should have stayed with the original Travel Ban, not the watered down, politically correct version they submitted to S.C." (S.C. is Supreme Court.)

The Justice Dept. should have stayed with the original Travel Ban, not the watered down, politically correct version they submitted to S.C.

"The Justice Dept. should ask for an expedited hearing of the watered down Travel Ban before the Supreme Court - & seek much tougher version!"

The Justice Dept. should ask for an expedited hearing of the watered down Travel Ban before the Supreme Court - & seek much tougher version!

"In any event we are EXTREME VETTING people coming into the U.S. in order to help keep our country safe. The courts are slow and political!"

In any event we are EXTREME VETTING people coming into the U.S. in order to help keep our country safe. The courts are slow and political!

Trump’s tweets directly contradict other members of his administration, on both the travel ban and on extreme vetting. Here’s a recap of what Trump and his staff have said about the executive order.

On May 28, Kelly told Fox News’ Chris Wallace that the order is a "travel pause" and that judges who say Trump’s order violates the Constitution are "dead wrong."

Kelly also said the administration has not even studied "extreme vetting."

"The irony here is, had it stood, we would have had the 90 days to study. We’re not even studying what would be procedures, because we are enjoined and can't do that … the irony again is we can't study it, but I’m just guessing, and implementing."

On March 6, in an interview with CNN’s Wolf Blitzer, Kelly said:

"You referred to it, many refer to it as a travel ban, we’ve always looked at it as a pause from those seven nations, now six, until we can get our arms around exactly how good we can vet individuals from those countries."

On Jan. 31, at a press conference after Trump’s initial executive order on Jan. 27:

"I'd like to clarify that the most recent executive order what it does and does not mean. This is not a travel ban; this is a temporary pause that allows us to better review the existing refugee and visa vetting system.

"Over the next 30 days, we will analyze and assess the strengths and the weaknesses of our current immigration system, which is the most generous in the world …

"Furthermore, this is not -- I repeat -- not a ban on Muslims. The Homeland Security mission is to safeguard the American people, our homeland, our values and religious liberty is one of our most fundamental and treasured values."

"First of all, it's not a travel ban ... I think Secretary Kelly or one of the other individuals that got up there from DHS mentioned I think a million people have now come into this country. That's not a ban …

"When we use words like ‘travel ban,’ that misrepresents what it is. It's seven countries previously identified by the Obama administration where, frankly, we don't get the information that we need for people coming into this country.

"I think the president has talked about extreme vetting and the need to keep America safe for a very, very long time. At the same time, he's also made very clear that this is not a Muslim ban, it's not a travel ban. It's a vetting system to keep America safe."

At that briefing, Spicer was asked about a Jan. 30 tweet in which Trump used the word "ban."

Spicer said that if Trump used that word, it’s because the media did it, too:

"He's using the words that the media is using … It can't be a ban if you're letting a million people in. If 325,000 people from another country can't come in, that is by nature not a ban … I think that the words that are being used to describe it are derived from what the media is calling this. He has been very clear that it is extreme vetting."

CNN’s Jake Tapper on Jan. 31 noted the rhetoric discrepancies, pointing out that even Spicer at times had used the word "ban" to refer to the president’s order, including during an event at George Washington University.

Gorka appeared on CNN’s New Day June 5 after Trump’s tweets, saying, "the president can call it whatever he likes." The Constitution allows him to control who comes into the country, he said.

"If he wants to call it a ban, he’s the president, he’s the chief officer of this administration, and he has every right to do that."

The June 5 tweet wasn’t the first in which Trump addressed the executive order’s description.

"Everybody is arguing whether or not it is a BAN. Call it what you want, it is about keeping bad people (with bad intentions) out of country!" 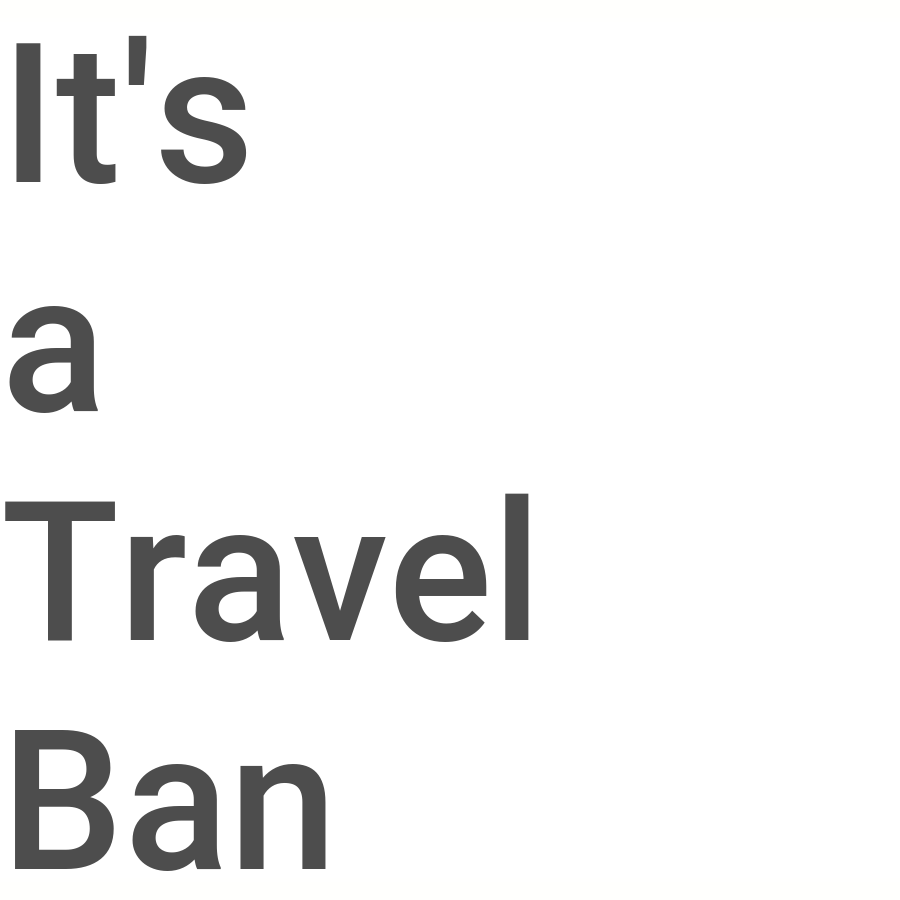 PolitiFact Rating:
It's a Travel Ban
"People, the lawyers and the courts can call it whatever they want, but I am calling it what we need and what it is, a TRAVEL BAN!"
Donald Trump
President of the United States