It seems like everyone in Washington tuned in for ousted FBI Director James Comey’s June 8 Capitol Hill hearing.

But watching pundits, reading hot-takes and browsing Twitter afterward can make you wonder: Did we all watch the same hearing?

"In some sense, I thought it was a good day for the president," said John Brabender, a political strategist and President Donald Trump supporter, on MSNBC’s Hardball with Chris Matthews June 8.

Conservative Washington Post columnist Jennifer Rubin countered, "Actually, I thought it was a devastating day for the president."

We found many more specific points of contention between pundits about what Comey said, instances in which opposing sides presented drastically different versions of the same reality.

Here are four notable disagreements over Comey’s testimony, put in the context of what Comey actually said during the hearing and his prepared remarks.

One of the most significant allegations against Trump is that he pressured Comey to let go of the FBI’s criminal investigation into Flynn’s financial dealings with foreign entities.

News outlets and pundits disagreed about whether Comey’s testimony cleared Trump of these charges.

But the Chyron on Fox News said, "COMEY: PRES DID NOT ORDER ME TO LET FLYNN PROBE GO." 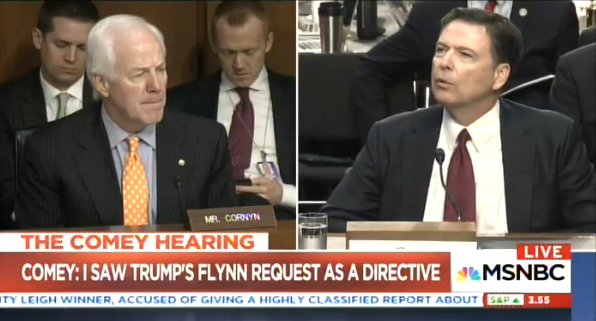 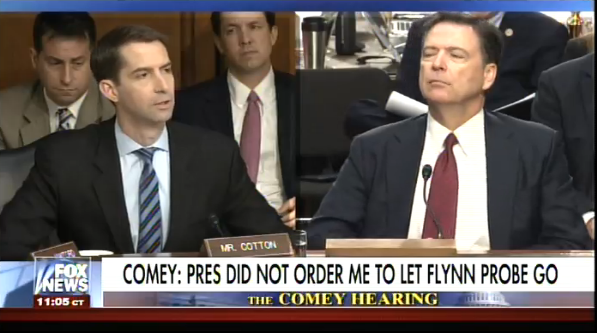 The reality is that both of these takes are somewhat correct, though they omit some key information.

According to Comey, Trump got him alone in the Oval Office and said, "I hope you can see your way clear to letting this go, to letting Flynn go. He is a good guy. I hope you can let this go."

Comey told Congress that he believes Trump’s intention was to get the FBI to back off from the Flynn investigation. But when senators specifically asked Comey if Trump directed him or ordered him to back off, he said "Not in his words, no."

"I mean, this is a president of the United States with me alone saying, ‘I hope this,’ " Comey said, "I took it as, this is what he wants me to do. I didn't obey that, but that's the way I took it."

Whether Trump wanted to stop an FBI investigation

Along the same lines, some Trump sympathizers heard Comey say that Trump actually wants the FBI investigation into Russia’s election meddling to continue, while Trump opponents took Comey’s remarks as evidence that Trump wants to obstruct it.

"Not only did he not encourage Comey to stop, he encouraged him to go forward with the investigation," said Fox News’ Sean Hannity.

Compare that to this comment from MSNBC’s Rachel Maddow: "The FBI director being fired by the president to try to change or stop an FBI investigation into the president’s campaign and his top staffers, that is a big freaking deal."

Hannity has a point in that Comey said Trump told him it "would be good" to find out if any of his associates were involved with Russia in a nefarious way. But according to Comey, this comment came in the middle of an attempt by Trump to get Comey to "lift the cloud" of the Russia investigation off of the Trump administration.

"I don't remember any conversations with the president about the Russia election interference," Comey said.

In his testimony, Comey corroborated Trump’s claim that he wasn’t under any sort of FBI investigation and that Comey told him so multiple times.

For Trump supporters, that means Trump is in the clear. For his detractors, there’s still a possibility Trump will come under investigation down the line.

"I think the most important thing coming out of former Director Comey’s testimony today was Donald Trump was never under investigation," said former Trump campaign manager Corey Lewandowski on For the Record with Greta on MSNBC. "He informed then President-Elect Trump and also President Trump that there was no investigation, and that is a very important factor which is being pushed by the mainstream media aside, but the fact is Donald Trump was never under investigation from the FBI."

Later on Greta Van Susteren’s show, conservative pundit Bill Kristol said this doesn’t rule out the possibility of future investigations centered on Trump and compared the current situation to the Watergate scandal under President Richard Nixon.

As Lewandowski said, Comey did tell Congress that Trump wasn’t personally under any sort of FBI investigation throughout the transition or his presidency up until the day he fired Comey May 9. But Lewandowski’s comment doesn’t capture the fact that Trump’s campaign overall was under investigation.

Additionally, Comey said in the hearing he is "sure" Robert Mueller, the special counsel overseeing the Russia investigation, will look into whether Trump tried to obstruct the Flynn investigation.

To some pundits, Comey’s testimony ended the idea that there was any tie between Trump’s administration and the Russians. But to others, Comey’s remarks indicate that there’s still more to uncover.

For example, according to Ned Ryun, a former writer for George W. Bush and the CEO of American Majority, Comey’s testimony killed the Russian collusion story.

"The Russian collusion fairytale that you know I like to talk about died yesterday," Ryun said during a panel discussion on MSNBC.

"That guy knows what he’s doing," she said. "The fact that he said when he got asked about Trump’s involvement whether he may have colluded with Russia, he said, 'I can’t answer that here. I need to do it in a closed session.’ "

Palmieri’s statement refers to Comey’s reluctance to answer specific questions about whether Trump himself colluded with Russia. Instead of answering the question, Comey shied away, telling Sen. Tom Cotton, R-Ark., that, "That's a question I don't think I should answer in an opening setting."

In his testimony, Comey called a New York Times article from February that contended that Trump associates had direct contact with Russian officials prior to the election, "not true."

Still, with multiple investigations going on — between the FBI, other intelligence agencies, and congressional committees — it’s likely we’ll be finding out more about Russian interference in the election.