Shortly before Senate Republicans released their bill to repeal and replace the Affordable Care Act, we asked several health policy analysts for the aspects of the bill that they would be paying close attention to. They came up with five key issues to watch.

Now that the bill is officially out, we know how the Senate bill addressed those five issues, with reaction from some of our experts.

How, and how quickly, will the bill shrink Medicaid enrollment?

As it turns out, one of the bill’s biggest impacts will be on Medicaid, both for people who qualified for Medicaid coverage prior to the Affordable Care Act and for those who secured coverage due to the program’s expansion under President Barack Obama’s signature health care law.

Medicaid enrollment will fall a little less quickly than it would under the House bill, but new restraints on the program will be severe.

Then, after 2024, federal funding for Medicaid under the Senate proposal will grow more slowly than it would under the House bill, due to a change in the inflation measures used to calculate funding allotments. "This could lead to steeper reductions in enrollment over the long run," Eibner said, although these effects might not show up in the 10-year window that the Congressional Budget Office uses as its primary measurement.

In the meantime, under the Senate bill, some of the currently mandated benefits under Medicaid would be made optional.

The Senate bill maintains many of the Affordable Care Act’s market regulations for private insurance, including the requirement that insurers offer coverage to all customers, and the requirement that insurers charge the same premiums regardless of health status. The bill also retains the essential health benefits requirements, which stipulate that plans must offer coverage for 10 commonly-used services, such as hospitalization, prescription drugs, maternity care, and mental health treatment.

However, the bill opens the door to a weakening of some of these provisions. States can opt out of some of the requirements if they apply to the federal government for a waiver -- and "there will be intense pressure for state regulators" to do so, said Linda Blumberg, a senior fellow at the Urban Institute.

If states seek waivers in large numbers and the federal government grants them, it would "effectively leave people with preexisting conditions without access to the services they need," said Timothy Jost, an emeritus law professor at Washington & Lee University.

Another area that could change are standards for out-of-pocket maximums -- that is, caps on how much a patient is responsible for on an annual or a lifetime basis. These caps were banned by the Affordable Care Act because people with particularly expensive conditions could be forced into bankruptcy by their medical costs.

However, insurers’ options for covering their costs will be limited in other ways. The Senate bill eliminates the Affordable Care Act’s individual mandate, bars denial of coverage, and prevents insurers from charging people with health problems more than healthy people of the same age.

So, to make sure their pools of customers aren’t over-filled with patients at a higher risk of getting sick, insurers "will look to protect themselves by selling coverage with much more limited benefits and much higher cost sharing," Blumberg said. "This hurts the non-wealthy the most, as well as people when they have a health problem and as they get older." 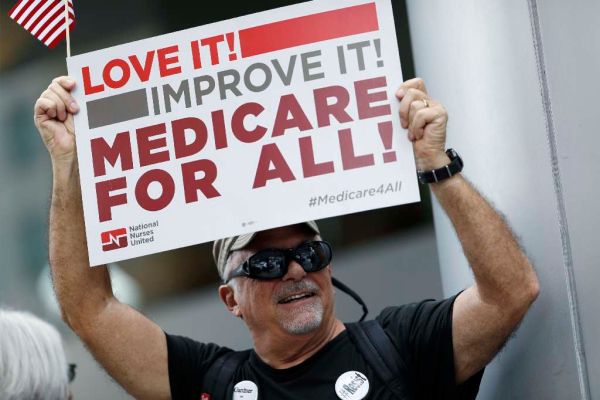 James Winkler, a retired physician, waves a placard during a protest in Denver on June 23, 2017, targeting the Republican health bill. More than 100 protesters crowded the sidewalk outside the building in which Sen. Cory Gardner, R-Colo., has his office. (AP/David Zalubowski)

What, if any, subsidies will be offered for the purchase of private coverage?

Currently, people who have purchased insurance on the Affordable Care Act marketplaces can get two forms of subsidies. One form, called premium tax credits, reduces a customer’s monthly payments for coverage. The other, known as a cost-sharing subsidy, keeps down patients out-of-pocket costs for doctor or hospital services.

The Senate bill would eliminate cost-sharing subsidies entirely. It does keep tax credits, but the maximum income to qualify for tax credits is reset for 350 percent of the federal poverty level -- about $42,000 for a single individual -- which is lower than the 400 percent under current law.

Stan Dorn, a senior fellow at the Urban Institute, said one of the areas in which the changes will be most clearly felt are in deductibles. For many people who buy insurance on the marketplaces, their out-of-pocket costs will go up, even if their premiums go down.

"A lot of the complaints about Obamacare have been that the deductibles are too high, but this bill will make it a lot worse," Dorn said. On balance, younger people may benefit from the tax credit changes made by the Senate bill, but older people will be worse off, he said.

The result of all these changes, Dorn said, could be that "a lot of people will drop their coverage."

What will be done to address the costs of mental health and substance use?

On the upside, the bill includes $2 billion to combat the opioid crisis, to be spent between 2017 and 2019. The downside? Experts expect that amount to be a drop in the bucket compared with the cumulative reductions for substance abuse and mental health prompted by the Senate bill.

How fast will taxes imposed by the Affordable Care Act be eliminated?

The Senate bill eliminates most of the taxes in the Affordable Care Act. (The major exception is the "Cadillac tax" on high cost health plans, which the Senate bill retains but delays until 2026.)

Here’s a rundown of some of the higher-profile taxes in the Affordable Care Act and how they would fare under the Senate bill.