John Kelly, the Civil War and the compromise that almost was
By Jon Greenberg November 2, 2017

The uproar that followed White House chief of staff John Kelly’s comment about the roots of the Civil War stands as Exhibit A of the potential problems that come when an official uses shorthand to talk about the country’s history of slavery.

Here is the key excerpt of Kelly’s Oct. 30 interview with Fox News host Laura Ingraham. Ingraham had brought up the issue of removing statues of Confederate leaders. Kelly said:

"It's inconceivable to me that you would take what we think now and apply it back then. I think it's just very, very dangerous. It shows you what -- how much of a lack of appreciation of history and what history is.

"I would tell you that Robert E. Lee was an honorable man. He was a man that gave up his country to fight for his state, which in 150 years ago was more important than country. It was always loyalty to state first back in those days. Now it's different today. But the lack of an ability to compromise led to the Civil War. And men and women of good faith on both sides made their stand where their conscience had to make their stand."

Kelly might have been talking about Lee, but his focus on compromise became a lightning rod.

Ken Burns, whose groundbreaking PBS series include The Civil War and this fall’s The Vietnam War, joined other historians disappointed in Kelly’s synopsis, tweeting, "Many factors contributed to the Civil War. One caused it: slavery."

Kelly's comments about a lack of ability to compromise causing the Civil War open a window on the efforts to head off war in 1861 and details seldom studied by the general public.

Behind every war lies the failure of negotiation or compromise. But compromise before the Civil War failed for particular reasons. There was sufficient support for allowing slavery to remain where it already existed. It was slavery’s future in the rest of the country that allowed for no common ground.

The fact is, on the eve of President Abraham Lincoln’s inauguration, Congress had approved a constitutional amendment that would have preserved and protected slavery for all time. It was headed to the states for ratification and Lincoln said he did not object to it.

The other 13th Amendment

The 13th Amendment we have today abolished slavery. But on March 2, 1861, President James Buchanan approved an amendment that would have preserved it for all time.

The "other" 13th Amendment, also called the Corwin Amendment, put a firewall between the federal government and slavery in the slave states. Passed by super-majorities in the House and Senate, it said:

No amendment shall be made to the Constitution which will authorize or give to Congress the power to abolish or interfere, within any State, with the domestic institutions thereof, including that of person held to labor or service by the laws of said State. 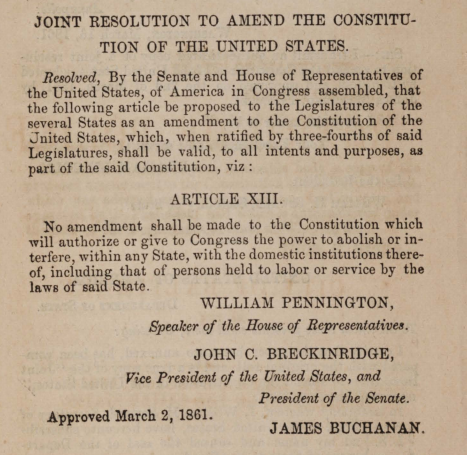 "The very nature of this compromise was to reassure anxious Southerners that they could be safe in the Union," said Daniel Crofts, professor of history at the College of New Jersey and author of Lincoln and the Politics of Slavery. "It didn’t just clarify that the federal government couldn’t interfere with slavery. It said no future amendment could change that." (Whether an amendment can be insulated from a future amendment is an unresolved legal puzzle.)

This came at the 11th hour. In the time between Lincoln’s election and his inauguration, seven states had already seceded. Anyone who thought the secessionists had been bluffing had been proved wrong.

In his first inaugural address, Lincoln spoke directly about this final effort.

"I depart from my purpose not to speak of particular amendments so far as to say that, holding such a provision to now be implied constitutional law, I have no objection to its being made express and irrevocable," he said.

Ohio, Maryland and Illinois quickly ratified the amendment, but when Confederate forces fired on Fort Sumter in Charleston, S.C., in April 1861, the war began and the ratification process stopped. (It was a sign of Lincoln’s evolving thinking on slavery that two years later, he issued the Emancipation Proclamation, freeing slaves in the South.)

Lincoln was not alone in his approach. Leading anti-slavery congressmen Thaddeus Stevens and Owen Lovejoy didn’t embrace the amendment but agreed that the federal government had no power to interfere with slavery in the slave states. It was in keeping with the Republican Party 1860 platform, which affirmed "the right of each state to order and control its own domestic institutions according to its own judgment exclusively."

But if the amendment protected the self-determination of slave states, it said nothing about allowing slavery in future states to come. Two related compromise efforts did keep that option open. They had some traction with southern leaders, but hit a brick wall with Lincoln and most Republicans.

The Crittenden Compromise and the Peace Conference of 1861

In December 1860, Kentucky Sen. John Crittenden offered a plan that would allow slavery south of the line defined in the 1820 Missouri Compromise, roughly following the border between Kentucky and Tennessee. The Crittenden Compromise would run that line all the way to the Pacific. Above it, as states formed in the center of the nation and westward, slavery would be prohibited. Below it, citizens of new states could impose it. (The 1854 Kansas-Nebraska Act ran counter to this scheme.)

Crittenden’s plan included amendments and resolutions to bar federal intervention in slave states and from interfering with the slave trade among the states.

"Entertain no proposition for a compromise in regard to the extension of slavery," Lincoln wrote Dec. 11, 1860. "The instant you do, they have us under again; all our labor is lost, and sooner or later must be done over."

The measure died in committee.

"Lincoln wanted to put slavery on a path to extinction," Striner said. "If it was allowed to spread, he thought it was entirely possible that it would eventually take on national dimensions."

Lincoln also understood the politics of his party.

Blocking the extension of slavery from new states was "the glue that held the Republican Party together," Croft said. "There was a significant faction in the party that was dedicated to the end of slavery. They were told that stopping it in the territories was the first step to getting rid of it."

In February 1861, a group of northern and southern leaders met at the Willard Hotel in Washington to revive many of the essential pieces of the Crittenden plan. That failed too, largely for the same reasons as the original effort.

The Republicans were dead-set against expansion, and the slave-owning states saw it as the key to survival.

"The pro-slavery states were correct that the election of Lincoln and Republican control  of Congress could set in motion a long-term series of events that could end slavery," Striner said. "If every new state was non-slave owning, then it was just a matter of time before they would have the votes to ban it everywhere."

An Oct. 11, 1860, editorial in the Charleston Mercury warned of the threat if Lincoln and the Republicans won in the election.

"When a party is enthroned at Washington, in the executive and legislative departments of the government, whose creed it is to repeal the Fugitive Slave Laws, the underground railroad will become an overground railroad," the newspaper editors wrote.

They went on to warn that slaves would fall in value as slave-owners closer to the north would unload them on the "Cotton states," that the abolitionist movement would surge and that "secret conspiracy, and its attendant horrors and rumors of horrors, will hover over every portion of the South."

Ultimately, the unbridgeable divide was not the fate of slavery in the short run, but the battle between two irreconcilable visions of America. One looked decades ahead and saw a future with slavery. The other looked ahead and saw it gone.