How is a ‘mass shooting’ defined?

How many people must die in a shooting before it’s termed a ‘mass shooting’? Four people? Two? None at all?

There’s no legal definition, and as prominent gun violence researcher Garen Wintemute of the University of California at Davis told us, "there isn’t a right and wrong here."

Even so, the debate over what meets the definition of a mass shooting has divided gun rights and gun control groups, police, politicians and journalists as they all wrestle with how to communicate about these horrific crimes and how to track them.

House Minority Leader Nancy Pelosi and other Democrats rekindled the debate over what defines a mass shooting this week when she claimed there had been "273 mass shootings in 2017 -- one for each day of the year."

She made her claim in a letter to House Speaker Paul Ryan the day after the Las Vegas shooting that left at least 59 people dead and injured more than 500.

"Today, our nation woke up to news of the worst mass shooting in our history, claiming the lives of at least 58 innocent men and women in Las Vegas.  Nearly 12,000 Americans have been killed by guns with 273 mass shootings in 2017 – one for each day of the year.  On average, more than 90 Americans lose their lives to gun violence every day, a daily toll of heartbreak and tragedy in communities across America."

Pelosi went on to urge Congress to pass the bipartisan King-Thompson legislation to strengthen gun background checks and form a Select Committee on Gun Violence "to study and report back common sense legislation to help end this crisis."

Pelosi’s tally of 273 mass shootings relies on the broad definition of at least four or more people killed or injured. Some of these events, however, include gang shootings or home invasion robberies, stretching the definition even further.

There’s no doubt the California lawmaker picked the criteria that best fits her views on gun-control, and ignored more restrictive definitions. But after researching this topic this week, we found there is no widely accepted definition for this crime — at least none without significant deficiencies.

In February 2016, PolitiFact California examined a similar claim by Lt. Gov. Gavin Newsom that relied on the same broad definition for mass shootings of four or more people injured. We rated it Mostly False. PolitiFact Florida in October 2015 rated Half True a similar claim by Democratic Congreswoman Debbie Wasserman Schultz, while noting she ignored the more restrictive definitions of mass shooting.

Below, we take a close look at Pelosi’s letter, with a focus primarily on her tally of 273 mass shootings. We are not rating her claim on our Truth-O-Meter, however, because our current research indicates the debate over the definition of mass shootings is more unsettled than ever. 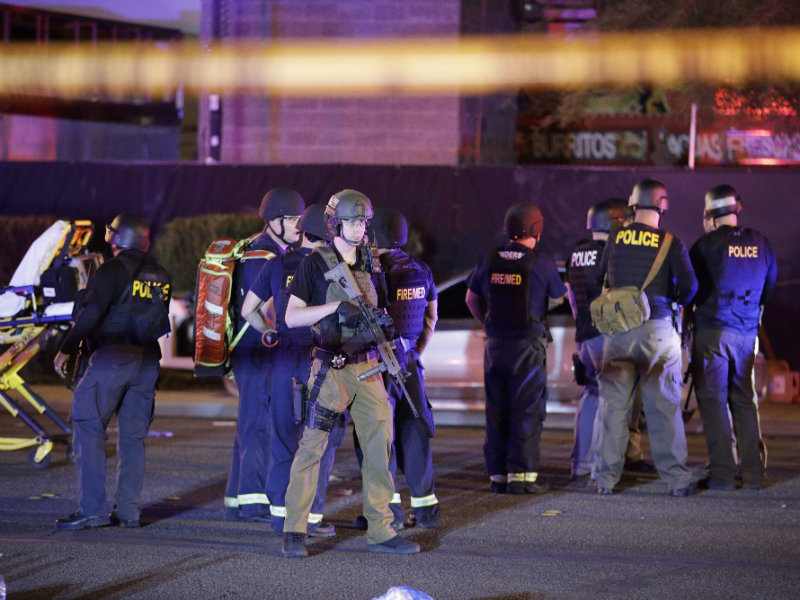 Pelosi’s spokesman told us the congresswoman’s number comes from the Gun Violence Archive, a crowdsourcing website that tracks gun deaths using media reports. It defines a mass shooting as one in which at least four people are injured or killed in one location, not including the suspect.

The Gun Violence Archive listed 273 mass shootings as of Oct. 1, 2017, the day of the Las Vegas massacre. The group describes itself as a nonprofit committed to accurate information about gun violence that "is not, by design an advocacy group." It also posts articles and opinion pieces about preventing gun violence on its website.

Pelosi’s claim and the mass shooting definition it rests on ignores strict criteria developed in a July 2015 Congressional Research Service report. Its defines a mass shooting as "a multiple homicide incident in which four or more victims are murdered with firearms, within one event, and in one or more locations in close proximity." The report has been frequently cited by some criminologists and gun rights advocates.

Criminologists who spoke with PolitiFact in the past say this definition was more in line with events such as the shootings at Columbine, Virginia Tech or in San Bernardino.

They also told PolitiFact that the Gun Violence Archive’s tally includes far more than what would be considered mass shootings because it lumps in gang shootings and home invasion robberies.

As PolitiFact Florida reported in 2015, "Politicians or others who want to make a point about guns choose a set of data and a definition that reinforces the point they want to make. People who want more gun control tend to choose more expansive definitions."

"Those who want to create a sense of crisis over the violence will tend to use lower cutoffs, while those who want to minimize the problem will use higher cutoffs," Gary Kleck, a criminology professor at Florida State University, told PolitiFact Florida.

Still, there are valid concerns about the strict definition of a mass shooting.

Gun control groups say it’s arbitrary to distinguish between a death and an injury. They point out a significant problem: Some shootings that injure a dozen or more people but don’t kill four people would not be considered a mass shooting under the more restrictive definition.

Jim Bueermann, a former police chief in Redlands, Calif. — the city where the San Bernardino shooting suspects lived — told the Washington Post in 2015 that it doesn't make much sense to distinguish when tracking mass shootings between an injury and a death.

"I would submit that sometimes the only difference between a shooting and a murder could be a centimeter, an inch, an unlikely ricochet, whatever," Bueermann, who now is president of the Police Foundation, which researches law enforcement practices, told the Post. "If we're trying to capture true gun violence in our country, a broader definition [of mass shooting] is probably more useful than a narrow one."

Other experts say the answer is somewhere in the middle.

Frederic Lemieux, a sociology professor at Georgetown University, wrote about the challenges of tracking mass shootings in the Chicago Tribune the day after the Las Vegas shooting.

He said the FBI, which started using the more restrictive definition in 2008, has since "moved away from ‘mass shootings’ toward identifying an ‘active shooter’ as ‘an individual actively engaged in killing or attempting to kill people in a confined and populated area."

Lemieux went on to say the broad definitions of mass shooting remain problematic, citing the inclusion of crimes such as familicide, where "victims are exclusively family members and not random bystanders."

"Gang murders are usually crime for profit or a punishment for rival gangs or a member of the gang who is an informer. Such homicides don’t belong in the analysis of mass shootings," he added.

We also examined Pelosi’s claim that "Nearly 12,000 Americans have been killed by guns" in 2017. The Gun Violence Archive is also the source for that figure. It includes gun deaths across all categories, from police shootings to accidental deaths involving children, though not suicides.

Pelosi claimed there have been 273 mass shootings so far in 2017, based on a very broad definition of this crime by the Gun Violence Archive website.

This website defines mass shootings as those that injure or kill at least four people. This criteria, however, doesn’t require that anyone is killed.

Additionally, its tally of mass shootings lumps in gang shootings and those shot to death in home invasions or family killings. While tragic, these would not typically be termed mass shootings.

And the broad definition used by Pelosi would certainly not measure up to events more often labeled mass shootings such as those in Newtown, Orlando or Las Vegas.

The criteria cited by Pelosi also ignores the strict definition of a mass shooting of four or more people killed, used in the past by the federal government. But that strict criteria is also problematic as it doesn’t count shootings in which numerous people are injured but fewer than four, if any, are killed.

Why should those horrific crimes not be counted among the tally of mass shootings? We struggled to find a satisfying answer to this and other questions.

Pelosi’s claim greatly stretches what can be considered an accurate count of mass shootings. Her statement captures none of the nuance or context around this debate, and emphasizes only the definition that fits her viewpoint.

But we decided not to place a Truth-O-Meter rating on Pelosi’s claim because the debate about what meets the definition of a mass shooting remains deeply unsettled. There is no widely accepted criteria — at least none that avoids significant problems of its own.