Bloggers
stated on January 28, 2021 in a blog:
Facebook tried to “shut down” the campaign to recall California Gov. Gavin Newsom.

In reality, Facebook stopped accepting political ads regardless of party affiliation last fall to curb misinformation. No one campaign was singled out.

In mid-December, the company made an exception to the ban when it allowed ads in the three weeks leading up to the U.S. Senate runoffs in Georgia and then resumed the ban last month.

Still, RedState.org published an article Jan. 28 with the headline: "Facebook Says No More Ads for Movement To Recall Gavin Newsom." The Newsom recall campaign shared the blog on its Instagram account early this week. Randy Economy, a spokesperson for the recall campaign, said he would review the post but did not respond to questions about why the campaign shared it.

The article in question includes a subheadline visible on social media that claims Facebook is "Attempting to shut down a fully legal recall effort because … cronyism?" It offers no evidence for that allegation. 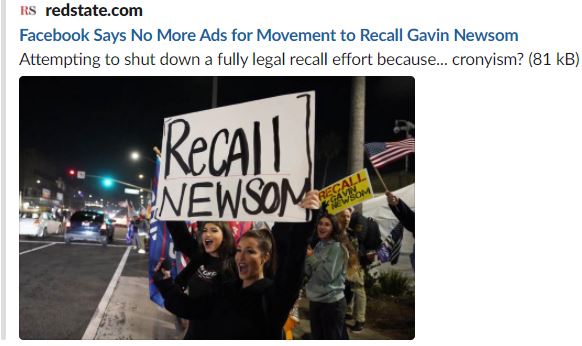 A screen shot of the RedState.com article and claim.

This post was flagged as part of PolitiFact's partnership with Facebook to fact-check false news on the social media platform. However, Facebook played no role in selecting the fact check or its rating.

Along with making the claim about shutting down the recall, the RedState.com article goes on to allege Mark Zukerberg, Facebook’s chief executive officer, "has sought out to silence dissent against his comrades in the Democrat party," following the Jan. 6 insurrection at the U.S. Capitol by Trump extremists.

Following the insurrection, Facebook blocked content posted to the #StormTheCapitol hashtag, according to a TechCrunch article. The article went on to say that Facebook representatives pledged to remove content praising the Trump supporters who infiltrated the U.S. Capitol as well as any other "incitement or encouragement" of the events, including photos and videos from the individuals’ perspectives.

Still, Devon Kearns, a Facebook spokesperson, wrote in an email that last year’s decision to pause political ads had nothing to do with the Newsom recall campaign.

"If they are unable to run ads relating to recalling Newsom, it is because of the ban on ads about social issues, elections or politics that has now been in place for over two months," he wrote.

The ban does not prevent political campaigns from publishing "organic" posts, or non-paid content. It means they can’t pay to post advertisements which are boosted by Facebook’s advertising algorithms and shared across the platform, including to those who do not follow the recall campaign.

"It's important that campaigns can run get out the vote campaigns, and I generally believe the best antidote to bad speech is more speech, but in the final days of an election there may not be enough time to contest new claims," he wrote in a September 2020 Facebook post.

Despite the pause on Facebook ads, the recall campaign maintains a strong presence on the social media platform, including a public group where nearly 21,000 members share information about upcoming recall drives along with news and opinion articles about the governor.

In recent months, the recall effort has gained momentum as Newsom’s administration has struggled to control numerous health and economic crises, most recently the slow distribution of COVID-19 vaccines.

More than one-third of California voters, or 36%, support recalling Newsom, while 45% are opposed, according to a UC Berkeley Institute of Governmental Studies survey released this week.

To qualify the recall for a future ballot, the campaign must submit approximately 1.5 million signatures of registered voters to county elections officials by March 17, all of which must be verified. Proponents say they have gathered more than 1.3 million signatures.

Last month, California Democratic Party Chairman Rusty Hicks described the effort to recall Newsom as "the California coup." We rated that ridiculous claim Pants on Fire. A coup is a violent overthrow of a government. A recall is a legally sanctioned effort to vote an elected official out of office midway through their term. It’s been part of California’s constitution for more than a century.

Conservatives have expressed distrust in Facebook and other social media companies, alleging they censor or diminish right-wing political speech.

Facebook, Twitter and a host of other companies banned President Donald Trump from their platforms last month after he encouraged his supporters to "fight like hell" and to march to the Capitol. Shortly after, a mob of extremists assaulted police officers and breached the building in a riot that left five people dead, including one U.S. Capitol police officer.

A conservative blog alleged Facebook tried to "shut down" the campaign to recall Gov. Gavin Newsom by refusing to run its advertisements.

That’s not what happened. Facebook stopped accepting political ads regardless of party last fall to slow false information on its platform, though it made an exception by allowing ads to run in the U.S. Senate runoffs in Georgia before resuming the ban. It did not single out the recall campaign, which maintains a strong presence on Facebook and has gained momentum in recent months.

The blog misleads with the headline, "Facebook Says No More Ads for Movement To Recall Gavin Newsom." The subheadline goes further with the unsubstantiated and outlandish allegation that Facebook tried to "shut down" the recall campaign altogether.

We rate that claim False.

TechCrunch.com, Facebook will turn all US political advertising off again after Georgia runoffs, Jan. 5, 2021.

Politico, The 'rug has been pulled out': Campaigns flop amid Facebook, Google ad bans, Jan. 27, 2021

Facebook, Information on Ads About Social Issues, Elections or Politics in the United States During 2020 Election, accessed February 2021.

Facebook, 5 Things to Remember About Political and Issue Advertising Around the US 2020 Election, Oct. 26, 2021

Associated Press, Transcript of Trump's Speech at Rally Before US Capitol Riot, Jan. 13, 2021