Kevin Sorbo
stated on February 15, 2021 in a tweet:
“So California is requiring signature verification for Gavin Newsom’s recall, but didn’t require it for the mail in ballots.”

A voter returns a vote by mail ballot in California. Andrew Nixon / CapRadio

After Republicans seeking to recall California Democratic Gov. Gavin Newsom said they had reached the number of signatures necessary to trigger a special election, one conservative influencer falsely claimed that the organizers have faced hurdles that voters in November’s election did not.

"So California is requiring signature verification for Gavin Newsom’s recall, but didn’t require it for the mail in ballots. How strange," said actor Kevin Sorbo, who starred as "Hercules" in a TV series about the mythological hero, in a tweet sent to hundreds of thousands of followers. 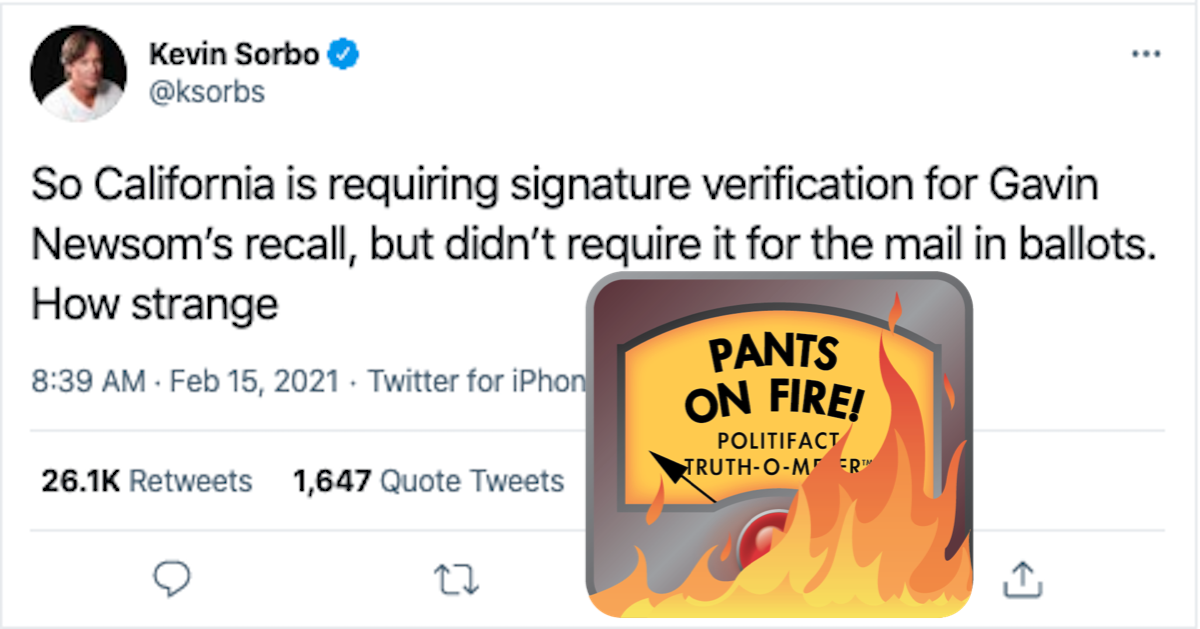 In fact, California did require signature verification for mail-in ballots for the 2020 election, as PolitiFact reported in the months leading up to Election Day. Several election officials, experts, journalists and fact-checkers debunked Sorbo’s Feb. 15 tweet soon after it was posted.

But the tweet still circulated widely, picking up thousands of retweets and likes. It was further amplified on the platform by former Arkansas Gov. Mike Huckabee and Rudy Giuliani.

The claim was flagged as part of Facebook’s efforts to combat false news and misinformation on its News Feed. (Read more about our partnership with Facebook.) 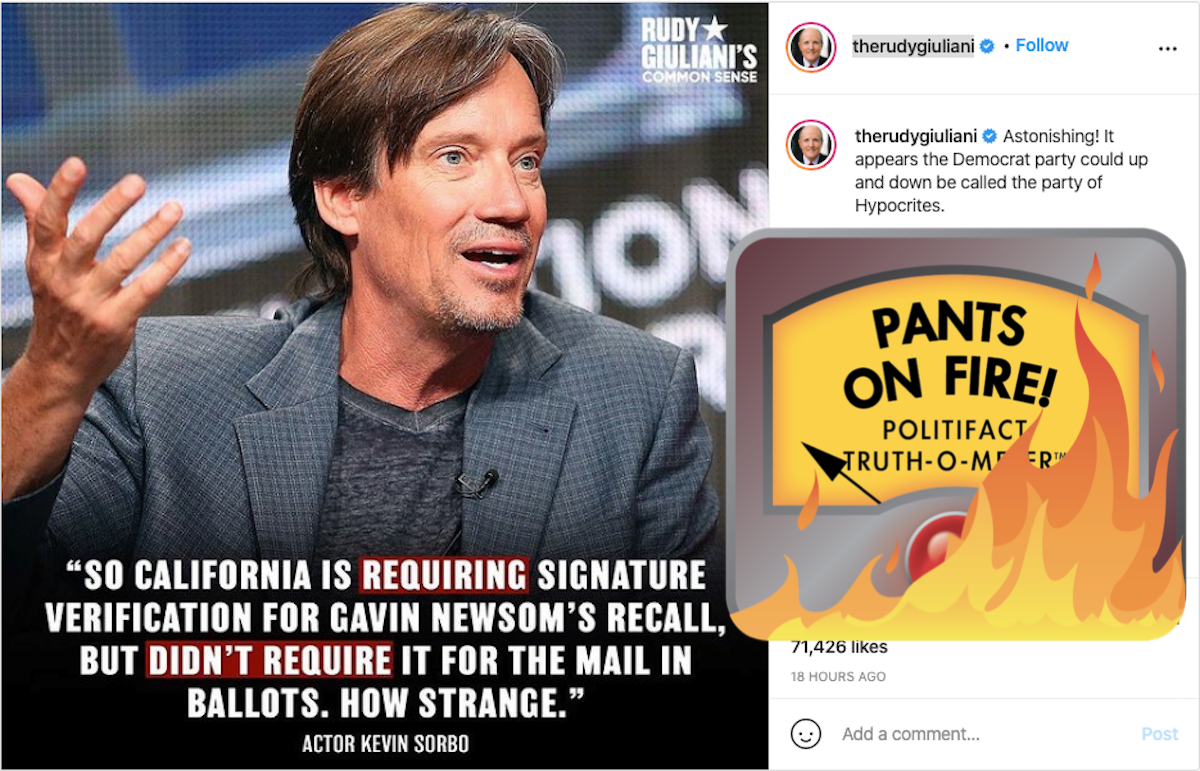 In addition, Buzz Patterson, a Republican who ran unsuccessfully last year for Congress in California’s 7th Congressional District in the Sacramento area, made a similar false claim that vote-by-mail signatures were not verified during last year’s general election.

Sorbo has previously pushed false information from his social media accounts, including the baseless claim that antifa was behind the U.S. Capitol riot. Facebook removed his page Feb. 12 for sharing debunked claims about the coronavirus or vaccines, a company spokesperson said.

This time, PolitiFact decided to step in with the facts. (Sorbo did not respond to a request for comment submitted through his website.)

California has signature verification for mail-in votes and recalls

"Sorbo’s tweet is not true," Sam Mahood, a spokesperson for the California Secretary of State’s Office wrote in an email, citing the office’s own fact check on this topic.

For a vote-by-mail ballot to count in California, the voter must sign the outside of their ballot’s envelope before they return it. California election law then requires officials in all 58 counties to verify the signatures on the envelope using the voter’s signature on file, which is the one provided when a person registers to vote. The same law requires officials to cross-check recall petition signatures with the signature on a voter registration record.

The method used to verify signatures for vote-by-mail ballots is different county-by-county. Some use software while others use county staff to examine signatures one at a time, Kim Alexander, president of the California Voter Foundation, told PolitiFact California last year.

Thousands of vote-by-mail ballot signatures are rejected every election when officials determine they don’t match with the signature on file. Nearly 50,000 were rejected last November, added Alexander, describing the rejections as "clear evidence that there is a signature check requirement."

A law signed in 2018 requires election officials to notify voters at least eight days before the certification of the election when they reject a signature and give them a chance to provide a valid one.

Signatures collected for petitions, like the effort to recall Newsom,are also verified at the county level. Mahood said the process should "generally be the same" as the process for verifying signatures on ballots, save for the fact that petitions carry multiple signatures, not one.

Supporters of the recall have criticized Newsom for what they describe as draconian stay-at-home orders during the coronavirus pandemic, as well as for the state employment department’s failure to quickly issue jobless benefits over the past year as hundreds of thousands of people lost jobs during the shutdowns. In recent weeks, the governor has faced criticism for the state’s slow roll-out of COVID-19 vaccinations.

Sorbo said, "So California is requiring signature verification for Gavin Newsom’s recall, but didn’t require it for the mail in ballots."

On the contrary, California did require signature verification for mail-in ballots during the 2020 election. Officials in all 58 of the state’s counties were required by law to check the signature on each voter’s ballot envelope against the signature from that person’s voter registration.

PolitiFact California, "Advice For Making Sure Your Mail-In Ballot Gets Counted In California," Oct. 23, 2020

Email correspondence with Rick Hasen, professor of law and political science at the University of California, Irvine, Feb. 16, 2021