In context: What Rush Limbaugh said about Hurricane Irma before evacuation
By Angie Drobnic Holan September 10, 2017

Limbaugh regularly casts suspicion on human-caused climate change. His comments on these matters are not accurate. In 10 years of fact-checking, we’ve found that the body of evidence points convincingly to the fact that the earth is warming due to carbon emissions associated with the use of fossil fuels.

Limbaugh’s comments centered on his opinions about the motivation of the media and local officials who issue storm warnings. Later, after criticism, Limbaugh suggested that his critics were distorting his views.

Limbaugh’s comments were lengthy. He implied many things without saying them directly. Because of that, we aren’t fact-checking his remarks, but we do think readers should see for themselves what Limbaugh said in context.

Here, we present a few relevant excerpts and links to his show’s transcripts of his extended remarks. That’s followed by some of the criticism he received and part of his lengthy response, and finally his comparatively brief comments on leaving.

We reached out to Limbaugh’s show via email for this report but did not hear back.

On Tuesday, Sept. 5, Limbaugh gave his first extended riff on the hurricane.

"The hurricane is what I want to lead off with, folks. And I’ve gotta be very careful here because I am not a meteorologist, and nothing I say today should be considered to be a forecast or a prediction. I am not the National Hurricane Center. I am not a climatologist or meteorologist. All I do is analyze the data that they publish. …

"So there is a desire to advance this climate change agenda, and hurricanes are one of the fastest and best ways to do it. You can accomplish a lot just by creating fear and panic. You don’t need a hurricane to hit anywhere. All you need is to create the fear and panic accompanied by talk that climate change is causing hurricanes to become more frequent and bigger and more dangerous, and you create the panic, and it’s mission accomplished, agenda advanced.

"Well, the TV stations begin reporting this, and the panic begins to increase. And then people end up going to various stores to stock up on water and whatever they might need for home repairs and batteries, and all this that they’re advised to get, and a vicious circle is created. You have these various retail outlets who spend a lot of advertising dollars with the local media. ...

"For those of you, by the way, in panic, there’s this thing in your kitchen called a sink, and at the sink there’s this thing called a faucet. And what you should do, if you like bottled water, is when you finish a bottle of water, don’t throw the bottle away. You put that bottle underneath that thing called the faucet and you turn it on, and water will come out and end up in the bottle and you’ll have bottled water, much like the water you buy in the bottle in the store anyway.

"It’s perfectly drinkable, perfectly fine. It may not be vitamin enriched, but how do you know the bottle stuff is? And it may not have a bunch of electrolytes in it, but it’s water. God made, God created, has everything in it to keep you from being dehydrated. So it’s there, even if you can’t find it at the grocery store. So you don’t need to panic over the water. ‘But, Rush, but, Rush, when the hurricane hits and the water stops and the water…’ I understand that. It’s why you should keep your empty bottles and fill ’em up from the tap. …"

"Do not listen to @rushlimbaugh when he says #Irma is not a dangerous #storm and is hype. He is putting people's lives at risk"

Do not listen to @rushlimbaugh when he says #Irma is not a dangerous #storm and is hype. He is putting people's lives at risk

"To have @rushlimbaugh suggest the warnings about #Irma are #fake or about profit and to ignore them borders on criminal. #ShameOnRush"

To have @rushlimbaugh suggest the warnings about #Irma are #fake or about profit and to ignore them borders on criminal. #ShameOnRush

Limbaugh claims he was misconstrued

Limbaugh responded to his critics at length the next day, Sept. 7, on his radio show, singling out Roker, S.E. Cupp of Headline News, and the Washington Post.

"So what did I say that has these people so discombobulated and upset? And I’m telling you, it all revolves around their politics. And I continually poke holes in their balloon about this, and they just can’t handle it, and they go livid. All I do is identify what they’re doing. They are the ones exaggerating. They are the ones using this destructive event, which is going to affect millions of people horribly, they are the ones using it to advance a political agenda, not me. And all I’m doing is pointing that out.

"I’m simply explaining to people how it works. Everything has been politicized in this country, and when the left is behind that politicization, you have corruption. There’s corruption everywhere in our politics, and it is epitomized during national disasters and emergencies because the left is always working on moving their agenda forward, climate change, radical environmentalism, and so the occasion of this hurricane is an exciting thing for them!"

At the end of the Sept. 7 show, Limbaugh announced he would have a guest host on Friday. Parts of Palm Beach County where Limbaugh lives were under mandatory evacuation orders for Friday by 10 a.m.

"May as well announce this. I’m not gonna get into details because of the security nature of things, but it turns out that we will not be able to do the program here tomorrow. That will be in the hands of Mark Steyn tomorrow. But we’ll be on the air next week, folks, from parts unknown. So we’ll be back on Monday. It’s just that tomorrow is going to be problematic. Tomorrow it would be, I think, legally impossible for us to originate the program out of here."

Roker reacted on Twitter to the news with two words: "Wait. What?" 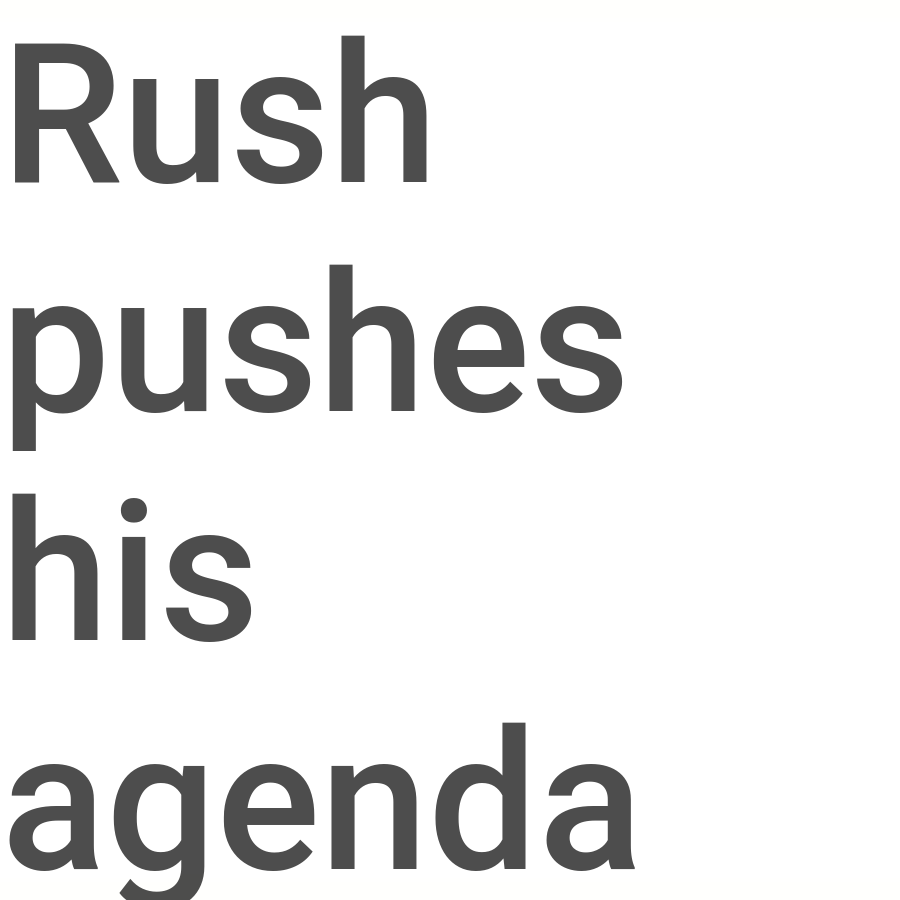 PolitiFact Rating:
Rush pushes his agenda
https://www.rushlimbaugh.com/daily/2017/09/07/why-the-drive-bys-are-lying-about-what-i-said-about-hurricane-irma/
There’s corruption everywhere in our politics, and it is epitomized during national disasters and emergencies because the left is always working on moving their agenda forward.
Rush Limbaugh
radio talk show host