Checking the facts on California’s wealth and poverty

California has one of the world's largest economies and the nation's highest poverty rate. Graphic by Capital Public Radio

Democrats in control of state offices tend to tout the state’s enormous GDP and its long stretch of job gains. Republicans, meanwhile, and nearly all candidates in the state’s 2018 gubernatorial race, Democrat and Republican, have cited the state’s economic inequality, its surging homeless population, affordable housing crisis and high poverty rate.

As you hear these statements, take a look at what we’ve already fact-checked below. Our reports examine the state’s job growth and how its economy stacks up nationally and even globally. Our fact-checks stretch back to 2015. We gave them Truth-O-Meter ratings based on our assessment of the data available at the time of the statements.

We’ll add to this list of fact-checks during the 2018 gubernatorial race and beyond.

Does California have the nation’s highest poverty rate, when factoring in cost-of-living?

GOP State Assemblyman Chad Mayes got it right in January 2017 when he said California had the country’s worst poverty rate, after factoring in cost-of-living expenses. Experts said the distinction was important, because factors such as California’s huge housing costs affect the poverty rate. Our rating: True.

Republican State Assemblyman and candidate for governor Travis Allen made a three-part claim in March 2018: He said homelessness in California has "skyrocketed," adding that the state has nation’s highest homeless population and its highest homelessness rate. We found he was right on the first two and slightly off the mark on the third claim.

California Lt. Gov. Gavin Newsom, a Democrat and the frontrunner in the race for governor, claimed in March 2018: California is "49th out of 50 in the United States in per capita housing units. Only Utah can lay claim to being lowest in per capita production." A McKinsey Global Institute study supported this claim and two independent policy experts affirmed the report. 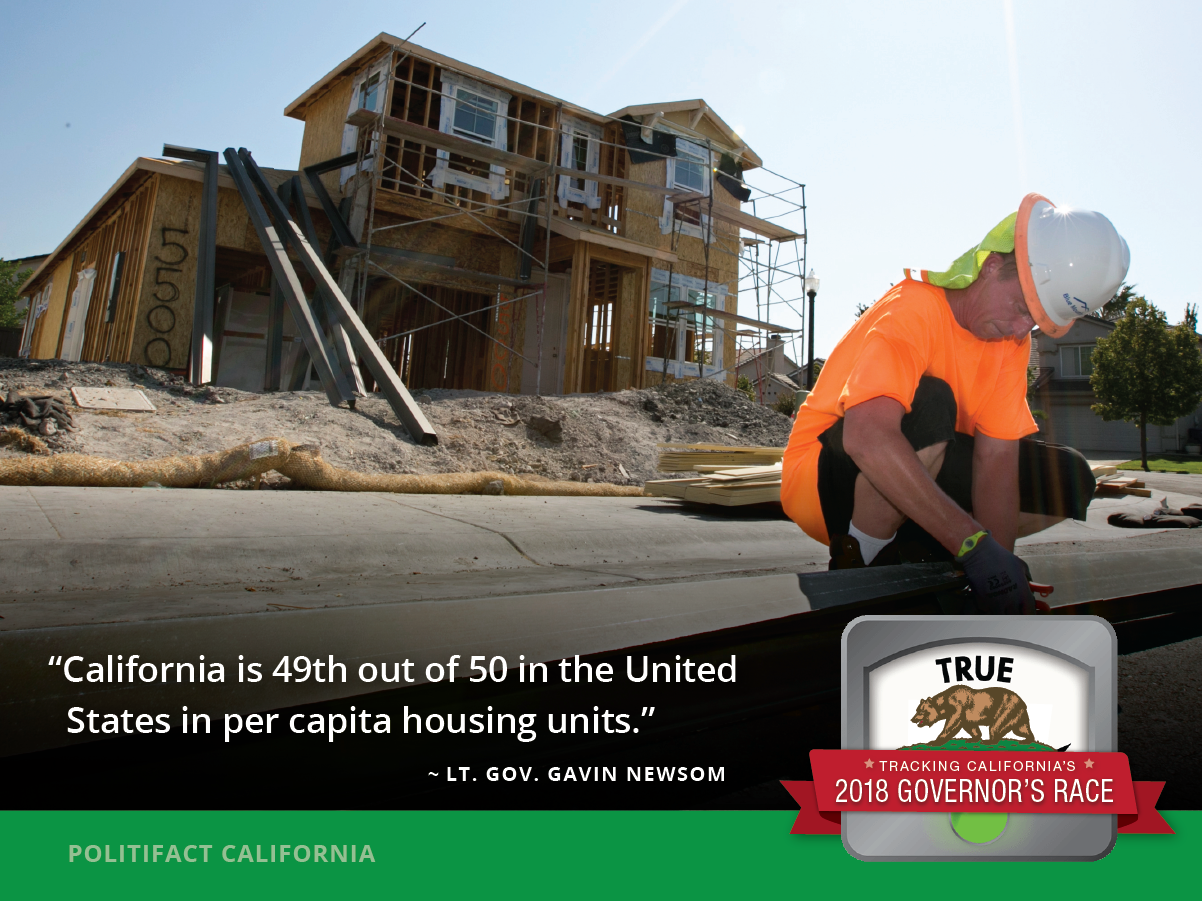 The Inland Empire: Second only to San Francisco in California job growth?

In July 2017, Lt. Governor Gavin Newsom, one Democratic candidate for governor,  claimed the Inland Empire was "the second fastest growing region" for jobs in the state. Data from two leading economists supported this claim, showing the region’s 3.5 percent growth rate was was second only to San Francisco’s 4.16 percent growth in 2016. We rated this claim True.

In May 2017, Democratic State Senate leader Kevin de León, who is challenging incumbent U.S. Senator Dianne Feinstein in 2018, said California had "more than half a million" clean energy jobs. He said that was "nearly ten times more than the number of coal mining jobs that exist in the entire nation." De León correctly quoted the best available data that tallies clean energy jobs. Labor economists, however, told us the numbers aren’t perfect as there is no formal data collection on clean energy jobs. With this note of caution, we rated the claim Mostly True.

As the first fact-check on this list revealed, job growth in the Inland Empire ranked second fastest in the state in 2016. Gov. Brown went a step further in a March 2017 NBC Meet the Press interview, adding the Central Valley to the mix. Although job growth in the Central Valley was increasing at the time, the region was actually behind the state average. Because of this difference, we rated this claim Mostly True.

Has California really created more than 2 million jobs since 2011?

In the same March 2017 interview on Meet the Press, Gov. Brown claimed that "2.1 million jobs have been created" over the last six or seven years in California. If anything, Brown slightly understated the number of net jobs created during that period. According to monthly job data tracked by the state, the total is closer to 2.34 million over the past six years. We rated this claim True.

Is California's economy 'growing a hell of a lot faster' than Texas?

In December 2016, Brown claimed "California is growing a hell of a lot faster than Texas." We took this to mean economic growth with a focus on the pace of job creation. At the time of the fact-check, job growth in California was at 2 percent, close to Texas’ 1.6 percent growth rate. While California had expanded jobs and its economy faster than Texas in many cases, there were a few instances where that growth had not necessarily been "a hell of a lot faster." We rated this statement Mostly True.

California has had a history of outpacing large states like Texas in job growth in the past, but what about the rest of the country? In November 2015, State Senate Leader Kevin de León stated that California had "robust job growth that outpaces the rest of the nation." Economists told us that as of 2014, California’s job growth rate had exceeded the nation’s overall average. We found, however, that California was far from the only state that had added jobs at a faster pace than the national average. Fourteen others accomplished the same feat. With this needed clarification, we rated the claim Mostly True.

Would trio of West Coast states be '5th largest economy' on planet?

Antonio Villaraigosa wrote in a December 2016 Sacramento Bee op-ed that California is the sixth largest economy in the world, which we rated in a previous fact-check as Mostly True. He added that the combined GDP of Washington, Oregon and California would surpass the United Kingdom to become "the fifth-largest economy in the world". The combined GDP of these three states would total 3.1 trillion, outranking the United Kingdom’s 2.8 trillion GDP. But Villaraigosa’s silence on cost-of-living in this claim is significant, as some economists factor that into GDP calculations. We rated this claim Mostly True.

Does California really have the '6th largest economy on planet Earth?'

State Senator Kevin de León claimed California is the world’s 6th largest economy in July 2016. By looking at 2015 GDP numbers, we found that California’s 2.4 trillion output does eclipse those of countries like France and Brazil, effectively sliding into the 6th spot globally. However, the high cost-of-living and the outsized role of Silicon Valley is left out of this statement, which would provide needed context. As a result, we rated this claim Mostly True.

In a speech at Sacramento City College in June 2016, then Democratic presidential candidate Hillary Clinton told the audience: "It is a fact that the economy does better when we have a Democrat in the White House". There were several caveats to this statement, such as the fact that economic growth at the time under Democratic President Barack Obama was lower than the Republican average. We also noted factors out of a president’s control, such as oil prices, make a big difference to an economy. We landed in agreement with PolitiFact Arizona’s rating of a similar claim, and rated this Half True.

If there’s a claim about California’s wealth or poverty that you want fact-checked, contact us with your suggestion. Tell us who made the claim and where you heard or read it.

We’re looking for a wide-range of statements to examine in the 2018 gubernatorial race. For our full collection of fact-checks in this race, visit our Tracking the Truth project.