Speaking at the conservative CPAC conference in Washington, President Donald Trump took a hard line on immigration and again used the deadly Central American gang MS-13 as an example.

"And I can't get the Democrats, and nobody has been able to for years, to approve common-sense measures that when we catch these animal killers, we can lock them up and throw away the keys."

It’s hard to tell exactly what Trump meant by this, and the White House answered only by providing details on one case from 2017. We’ve decided not to put this statement to the Truth-O-Meter, but we thought the issues it raises is worth a discussion. Immigration specialists said his statement is at best misleading.

Trump's statement "equates immigrants, particularly Central American and Latino immigrants, with gang activity as a means of creating fear regarding this group of migrants, when actually most recent Central American migrants should be viewed as traumatized survivors properly seeking protection under U.S. and international asylum laws," said Denise Gilman, who directs the immigration clinic at the University of Texas Law School.

The White House’s evidence is the case of an Immigration and Customs Enforcement arrest of Estivan Rafael Marques Velasquez, 19,  "a self-admitted MS-13 gang member" from El Salvador on Feb. 16, 2017.

La Mara Salvatrucha, or MS-13, grew out of poor Los Angeles neighborhoods where many refugees from civil wars in El Salvador, Guatemala and Nicaragua lived in the 1980s.

MS-13’s motto is "kill, rape and control," Attorney General Jeff Sessions has said. The Trump administration says there are more than 10,000 MS-13 gang members across 40 U.S. states and more than 30,000 worldwide.

In November 2015, Marques had been ordered removed by an immigration judge. In February 2018, he finished serving his time at the Rikers Island Correctional facility for a criminal conviction of disorderly conduct. ICE had an active detainer on him, but under New York City policy, his crime was not one of 170 offenses that is deemed serious or violent enough to trigger the city to notify ICE, according to the New York Post.

"The detainee was released after he pled guilty and served his time to an offense that does not qualify as a violent or serious felony under the city’s local laws‎, and his gang affiliation was not supported by evidence that meets even minimal constitutional standards," City Hall spokesperson Rosemary Boeglin said, according to the Post. "When ICE presents evidence to our city that an individual in our custody has been convicted of a violent or serious offense — one that threatens the public’s safety — we will fully cooperate."

Marques’ example highlights a tricky situation where different levels of government have clashing policies, but it does not indicate that the law generally allows undocumented immigrant "killers" out of jail, as Trump suggested.

So what does law generally say about known or suspected killers without a legal immigration status? 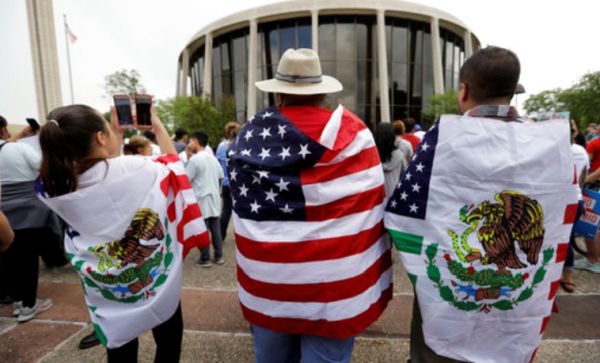 Protesters take part in a rally to oppose a Texas "sanctuary cities" bill that aligns with the president's tougher stance on illegal immigration, on June 26, 2017, in San Antonio. (AP/Eric Gay)

What happens if a known immigrant killer is apprehended?

If Trump is referring to MS-13 members arrested inside the United States, he is wrong that they are simply let go.

"The immigration statute 8 U.S.C. § 1226(c) requires the government to detain people who have committed certain crimes while going through deportation proceedings," said Steve Yale-Loehr, an immigration law specialist who teaches at Cornell Law School. "That is called mandatory detention."

If Trump is referring instead to MS-13 members caught at the border while trying to enter the United States, this statement isn’t much more accurate, Yale-Loehr said.

"Under current law, immigrants who are detained within 100 miles of the border and who have been in the country less than 14 days can be deported immediately, without being processed through the immigration courts," he said.

There is another option: Individuals can seek asylum if they have suffered persecution or fear they will suffer persecution due to race, religion, nationality, membership in a particular social group, or political opinion.

Immigration experts have told us that while gang members can apply for asylum, it would be difficult for them to receive it.

"If the gang member persecuted others or committed a serious crime in the United States or his country of origin, he would likely be barred from asylum," Fatma E. Marouf, a professor of law and director of the Immigrant Rights Clinic at Texas A&M University School of Law, told PolitiFact earlier this month.

However, if a gang member or criminal can somehow make a substantive case that their asylum argument should be heard, the immigrant would be allowed to stay in the United States until their hearing. They would typically post a bond to do so.

This is what critics call "catch and release."

Border Patrol agents and ICE officials can release people in this way, under what is known as prosecutorial discretion, Yale-Loehr said. In addition, immigration judges can allow immigrants in deportation proceedings to be released after they pay a bond, if they meet certain conditions.

"But that is happening less and less often under the current administration, and the government is certainly not required to release people who may be deportable, Yale-Loehr said. He cited a Department of Homeland Security memo that drastically cut back on the practice in February 2017, shortly after Trump was inaugurated.

Gilman agreed. "An individual with serious criminal history or gang affiliation would almost certainly not be released, whether arrested within the United States or at the border," she said. "In fact, there have been numerous instances in the past six months in which ICE has insisted on holding minors and young adults in detention on the grounds of alleged gang involvement when the evidence actually shows that there was no such involvement. So if anything, the net has been cast far too wide."

In any case, if the Trump administration has been able to modify the guidelines for prosecutorial discretion within executive-branch agencies, that undercuts Trump’s complaint at CPAC that his hands are tied about changing the laws.

Email interview with Denise Gilman, director of the immigration clinic at the University of Texas Law School, Feb. 24, 2018