Pot 101 update: Are there limits on smoking pot at home near kids? Where else is it legal to smoke?

Consumers can purchase recreational marijuana at licensed dispensaries in California, but can't consume it on public property.

With the start of California’s retail recreational marijuana sales in January 2018, PolitiFact California published Pot 101, a guide to what’s legal and what’s not under the state’s landmark cannabis law.

We’ve continued to update the article with answers to reader questions. In February, we published a companion report on concerns over customer privacy at marijuana dispensaries.

Since, we’ve received many more questions about the freedoms afforded by the law, and its many restrictions.

Below are answers to two of the most common questions we’ve received in recent months.

Are there restrictions on smoking marijuana at a private residence in front of children?

A mother-of-three asked in June 2018 whether there are any rules on smoking marijuana at home around kids.

She said her sister-in-law constantly smokes at the house they share.

"I don't like it at all but there are times she smokes in her room," she wrote in an email. "It goes through vents and, of course, her door. … I was wondering if there was something that should be done? Or something in the law for it?"

"I don't need my three kids inhaling it," she added.

We found the rules differ depending on whether you are renting or own your home. It wasn’t clear from the reader’s email whether she owns the home.

If you are renting an apartment or house, the landlord can restrict the use of cannabis in or around the property, or completely prohibit it, under Proposition 64.

If you own the house, you can lawfully smoke within the residence.

We did not find any limits on smoking marijuana in front of or near children at one’s own private home.

"I have not heard of any [restrictions] related to children but I can’t say for certain that there are not," said Tamar Todd, who helped write Proposition 64, and is legal affairs director with the Drug Policy Alliance.

"There are no limits I know of — and no way to enforce if there were!" wrote Kevin Sabet, president of Smart Approaches to Marijuana, a national group opposed to cannabis legalization.

The restrictions, however, do not apply to private homes unless they are being used as a daycare, transitional housing or as crisis nurseries, according to the state Department of Public Health online brochure. 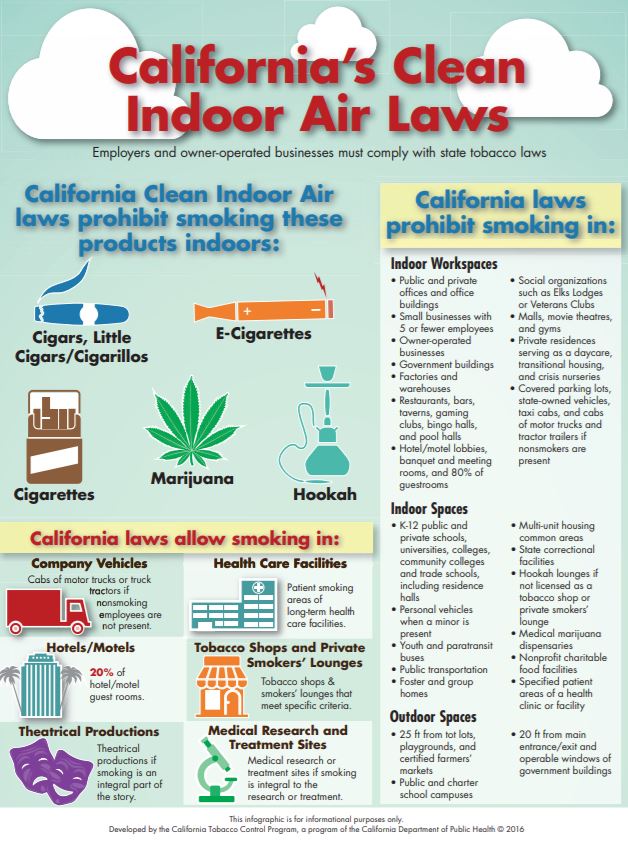 There’s been one change in recent months related to children and cannabis: Retail shops are now required to have childproof packaging as part of the new compliance regulations that went into effect on July 1.

They require all cannabis products be placed in "individually sealed and child-resistant packaging before it hits the retail shelves," according to a news article by EmeraldReport.com.

"After a customer purchases a product they must put those child resistant containers into a second, larger child resistant envelope before they exit the store," the website reads.

There’s also a ban on marketing pot to children.

Cannabis product labeling, for example, "may not refer to the product as a candy, be attractive to children, make health claims or include cartoons," according to the California Department of Public Health’s website.

Critics of marijuana legalization have said it could lead to a spike in emergency room visits for children who unwittingly consume marijuana edibles. A report in June 2018 by The Orange County Register found there has been an increase in visits at some hospitals. But it also found the severity of the problem is difficult to judge as the data isn’t widely tracked.

Is there ‘anywhere’ else you can legally consume weed besides your home?

In July 2018, a reader asked whether there’s any "anywhere where you can legally consume" marijuana, "besides in your own home, or maybe another private residence?"

As we reported in January, Californians are very limited in where they can legally consume pot. Private residences are still the safest bet. But that’s not stopping the cannabis industry from pushing for more legal locales.

Cities across the state, from West Hollywood to Palm Springs to Sacramento, are considering allowing permits for lounges and cafes, where smoking marijuana would be legal.

The state’s marijuana law, Prop. 64, allows local governments to permit cannabis consumption at public places such as festivals and cafes.

San Francisco and Oakland have already opened cannabis lounges, where people can legally smoke, vape and eat marijuana products. The lounges, however, are prohibited from allowing people to consume alcohol or tobacco in the same venue.

There are also marijuana-friendly hotels and inns popping up across the state. At the Desert Hot Springs Inn north of Palm Springs, guests will find small pot samples on their pillows in place of mints.

Under California law, it’s legal to gift up to an ounce of pot to someone over 21 years old.

The first two recreational marijuana festivals in the state were recently held in Sacramento and Santa Rosa. The state, however, has not seen an uptick of applications for marijuana festivals, said Alex Traverso, spokesman for the California Bureau of Cannabis Control.

Unlike hotels, festivals have to go through a three-step process which includes local and state clearance, the spokesman said.

We want to know your questions about what’s allowed and what’s not under the law.

We’ll consider your question for a future article.

PolitiFact California, How much privacy do you have when you buy marijuana in California?, Feb. 13, 2018

The Orange County Register, Some California hospitals report uptick in ER visits for marijuana, though data is hard to come by, June 1, 2018