The practice of President Donald Trump’s administration to detain immigrant children separately from their families  prompted claims on social media that compare the facilities to concentration camps.

"Children in dog kennels, suicide -- inside Trump’s immigrant concentration camps," said a June 11 headline by ReverbPress, a website that largely builds upon other reports in the media.

Facebook flagged this story as part of its efforts to combat false news and misinformation on Facebook's News Feed. Read more about our partnership with Facebook.

Before we get to that, here’s the backstory: Attorney General Jeff Sessions in April announced a "zero-tolerance" policy, meaning every person caught crossing the border illegally would be referred for federal prosecution, including adults who were traveling with children. Officials said about 2,300 children had been separated from their parents at the border between May 5 and June 9.

After facing criticism including from his own party, Trump signed an executive order June 20 stating the administration will temporarily keep families together pending proceedings.

The description of children being detained in "dog kennels" appeared to go viral after Sen. Jeff Merkley, D-Ore., visited a processing center in McAllen, Texas, on June 3. (He visited again June 17 as part of a media tour.)

In an interview on MSNBC’s All in With Chris Hayes on June 4, Merkley said part of the facility "had a series of cages that look a lot like dog kennels in which people had recently arrived and been put into them."

Merkley’s spokesman Ray Zaccaro, who accompanied Merkley on the tours, said Merkley wasn’t referring to a small one-animal kennel that one would have in their home. He said the fenced-in area that Merkley described as a kennel was probably about 30-by-30 feet, or about triple the size of this dog kennel enclosure sold by PetSmart.

Maria Hinojosa, executive producer of the NPR show Latino USA, said that immigrants use a word in Spanish that translates to "dog cage" to refer to these enclosures.

A Department of Homeland Security spokeswoman directed PolitiFact to a "myth vs facts" page that uses the word "barriers" rather than cages or dog kennels: "These short-term facilities do not employ the use of ‘cages’ to house minors. Certain facilities make use of barriers in order to separate minors of different genders and age groups — for the safety of those who are being held."

Washington Post reporter Nick Miroff also used the "dog-kennel" comparison and tweeted June 18 that "Border Patrol agents who work there call it ‘the dog kennel.’ Even migrants know it as ‘La Perrera.’"

Government handout images and a video of McAllen on Father’s Day show immigrants behind metal fencing. 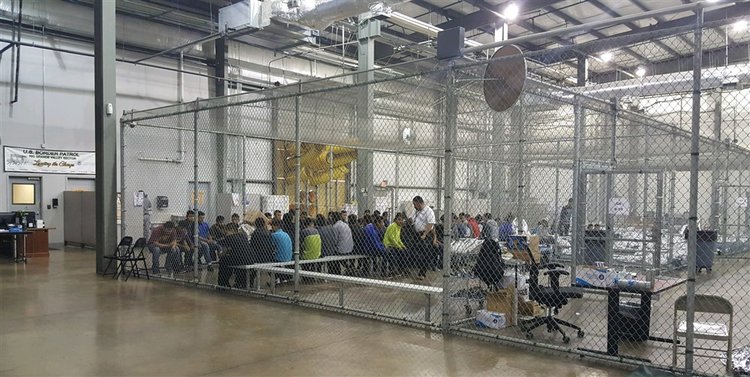 The suicide mentioned in the headline refers to one father who killed himself after he was separated from his family.

Marco Antonio Muñoz crossed the Rio Grande with his wife and 3-year-old son on May 12 near the town of Granjeno, Texas.

After the family was taken into custody, they arrived at a processing station in nearby McAllen and said they wanted to apply for asylum. Border Patrol agents told the family they would be separated. The father became angry and combative, and agents had to use physical force to take the child out of his hands.

Muñoz was detained at a local jail and found dead the next day. Customs and Border Protection are investigating his death which the Starr County Sheriff’s office referred to as a suicide.

The ReverbPress story refers to "Trump’s immigrant concentration camps," but the story doesn’t elaborate on that label.

In a Facebook message, ReverbPress cited dictionary definitions of a concentration camp including "a camp where persons (such as prisoners of war, political prisoners, or refugees) are detained or confined" and "a place where large numbers of people are kept as prisoners in extremely bad conditions, especially for political reasons."

"In our editorial determination, the facilities where immigrants are being detained, and their families are being separated, meets those definitions," ReverbPress said.

David Patterson, a chair in Holocaust Studies at the University of Texas at Dallas, said that if the headline was a reference to Nazi concentration camps, there is absolutely no comparison.

In the most notorious camps, "There were no children, because children were murdered with their mother upon arrival."

The inmates lost every possession they had including the fillings in their teeth. In order to receive their daily ration of food, they had to repeat the number tattooed on their arm in German.

"Prisoners were subjected to constant humiliation and dehumanization, as they were systematically starved to death, worked to death, and beaten to death," Patterson said.

In the morning, the inmates had to drag away dead bodies.

The horrid conditions in Nazi concentration camps and the genocide that occurred there are not comparable to the current immigration facilities in the U.S.

Debórah Dwork, Founding Director of the Strassler Center for Holocaust and Genocide Studies at Clark University, said the term "concentration camp" is applicable if used more broadly and not specifically to the Nazis.

Dwork said a concentration camp is a place where civilians are held by government or an authority and those civilians have very little if any access to the normal privileges and protections of civil society.

Though many associate the term "concentration camps" with the Nazis, the term had been used prior to the Nazis, including those established by the British during the Boer War in South Africa.

In June, Wikipedia added the "separation for immigrant children" to its list of concentration camps and internment facilities. This led to much debate about whether the inclusion of the immigrant facilities was appropriate.

The Trump administration has disputed any comparisons to Nazi Germany and concentration camps.

Customs and Border Patrol Acting Deputy Commissioner Robert Vitiello described one facility for children as a place where: "They have play stations, pool tables. It’s far from a concentration camp and people should be more accurate when they describe what we’re trying to accomplish there."

Attorney General Jeff Sessions told Laura Ingraham on Fox News that the comparison to a concentration camp is an exaggeration.

Washington Post, "A family was separated at the border, and this distraught father took his own life," June 13, 2014