The record-setting 2020 Democratic primary field: What you need to know

Democratic presidential candidate Kamala Harris looks at pastries on display during a stop at a local cafe on April 11, 2019, in Des Moines, Iowa. (AP)

The Democrats currently have 11 candidates running for president. At one point, it was more than two dozen -- a field that’s large by historical standards.

Why has the field been so big? What does it mean for the Democrats’ chances of winning the presidency? In this article, we’ll answer these questions and more. (See all of our fact-checks of the 2020 candidates in one place.)

Which Democrats are running?

Initially, former Starbucks CEO Howard Schultz was thinking about running as an independent. but he later backed out. And of course, some candidates who are now in the race could drop out before the first votes are cast.

Is this a record number of candidates?

The Democratic field appears to be a record for any presidential primary since 1972, the year when the current system of primaries and caucuses effectively began.

Prior to 1972, the nominee was chosen by smaller groups of party leaders. Only a few states held primaries back then, and some top candidates didn’t even contest them. As late as 1968, "the Democratic nominee, Hubert Humphrey, didn’t contest any of the primaries and didn’t win any, and yet he still got the nomination," said Boston University historian Bruce Schulman.

Because of these differences, we’re not counting election cycles such as 1924 that nominally had more contenders for the nomination. That year, 29 candidates received votes at the Democratic National Convention, which lasted for 17 days and 103 ballots.

In the post-1972 era, the previous record was 17, for the Republicans in 2016. The 17 Republicans that year included candidates who dropped out even before the first caucus and primary votes were cast, but they qualify in our book because they participated in early debates. Those candidates include former Louisiana Gov. Bobby Jindal, former Minnesota Gov. Tim Pawlenty and Wisconsin Gov. Scott Walker.

For a long historical stretch — between 1976 and 2012 — no primary field included more than 12 major candidates.

FiveThirtyEight.com, from which we drew the data to make the following chart, acknowledged that determining who counts as a "major" candidate is more art than science, although most of the candidates in question did hold elected office. Typically, dozens or hundreds of minor candidates file to run, but they are almost entirely ignored, and we’ll ignore them here, too. (The chart ignores the primary challengers to incumbent presidents.)

Why is this year’s field so big?

One obvious explanation for the big Democratic field is Trump’s weak approval ratings and the intense opposition Democratic voters express toward him. Vulnerable incumbents are always more attractive targets for the out-party.

But that’s not the only issue. Another is the declining ability of party elites to shape the race.

Specifically, the 2016 Republican primary showed that outsider candidates like Trump can prevail without much support from the party establishment, said Emory University political scientist Alan Abramowitz.

Trump’s achievement "encouraged a lot of Democrats to run this time despite very limited or no party support," Abramowitz said. "You can go directly to the voters and bypass the party leadership now using social media, even with a very limited budget."

There’s another incentive for candidates to join the race: An early bid with a quick exit can generate media attention that raises a candidate’s profile, and that can be leveraged into a run for another elected office, a future presidential appointment, or a gig as a cable news analyst.

Generally speaking, the presence of a major figure in the race, such as an outgoing vice president, tends to tamp down on the size of a field. That was the case in 2000, when Al Gore led the smallest primary field since 1972. Hillary Clinton’s stature as a former secretary of state, senator and first lady also kept the field small in 2016.

"In 2013 and 2014, Hillary Clinton consistently polled over 50 percent in national polls, and few candidates thought they could beat her, given that, plus her insider support and fundraising network, so they didn’t run," said Wayne Steger, a DePaul University political scientist.

As a vice president who’s been out of office for several years, Joe Biden started the 2020 election cycle as a nominal frontrunner, but his position was not considered sufficiently commanding to scare off Democratic rivals.

Does a primary field of this size pose a risk for Democrats?

History shows that large fields can go either way in terms of wins or losses for a party.

"The Republicans had a giant field in 2016, but Trump still emerged quickly as the frontrunner once the voting started," Abramowitz said. "A large field and rather contentious primary didn’t stop him from winning the general election." 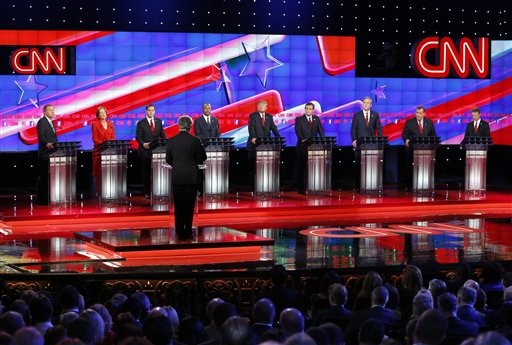 By contrast, the Democratic field in 2016 was relatively small, yet it was "one of the most divisive nomination contests we’ve recently seen," said University of Denver political scientist Seth Masket.

A bounty of candidates can actually offer some positives for a party.

"A large field can give voters more choices, provided that the choices aren’t between Tweedledum and Tweedledee," said Timothy Hagle, a University of Iowa political scientist. "Having a large field also allows for some issues to be highlighted that might otherwise be lost in the intensity of a more focused contest."

For instance, Hagle said, some Democrats this year are running long-shot campaigns that are aggressively pushing a particular policy issue, such as Inslee with climate change.

Overall, we found no clear pattern.

How common is it for the initial frontrunner to become the nominee?

It’s not uncommon for the early frontrunner to win the nomination, but it’s not a slam-dunk either.

Among the unexpected nominees to emerge were Sen. George McGovern in 1972, former Georgia Gov. Jimmy Carter in 1976, Massachusetts Gov. Mike Dukakis in 1988, and Arkansas Gov. Bill Clinton in 1992, said Robert Spitzer, a political scientist at the State University of New York-Cortland.

An analysis of early primary polling by FiveThirtyEight suggested a rule of thumb for unexpected nominees: consistently securing about 10% of the vote about 10 months before the first votes are cast.

By historical standards, Biden is not in an unassailable position to win the nomination, but he does have a leg up. As MSNBC’s Steve Kornacki has noted, Biden’s recent polling — almost 40% of the Democratic vote following his official entry into the race — is well above what early frontrunner Jeb Bush had in 2016, which was 17.8%.

How fast does the field tend to narrow?

Generally, the herd is thinned considerably after the early caucus and primary states of Iowa, New Hampshire and South Carolina.

"We often say there are three ‘tickets’ out of Iowa, and the same is basically true of New Hampshire, though the three might not be the same or in the same order," Hagle said. "Those first two contests often do a pretty good job of narrowing the field. We’ve seen a few who feel they will be stronger in the South, so they hang on to South Carolina. Former House Speaker Newt Gingrich was an example of this in 2012."

The reasons for this rapid winnowing are simple: attention and money.

Unsuccessful candidates in these three states inevitably experience "declining news coverage and digital media mentions, and declining fundraising," Steger said. "They usually cannot continue in the race, beyond a candidate with a regional presence, such as Ohio Gov. John Kasich in 2016. I would consider it unlikely to see more than three, possibly four, still being discussed in the media after South Carolina."

Could Democrats next year face the prospect of not having a nominee chosen by the time of the convention?

It’s not the most likely scenario, but it can’t be ruled out, experts say.

"The last time a major party convention went more than one ballot was 1952," Spitzer said. "Could that change this time? It’s possible, but I consider it highly unlikely, especially because the Democrats have one other factor this time to impel them to settle on a single choice and avoid a divisive convention fight that has not existed before: Donald Trump. He is and will be the great unifier for the Democrats."

Ballotpedia, presidential candidates for 2010, accessed May 1, 2019

FiveThirtyEight.com, "He’s Running — And That Could Be Dangerous For The Democrats," Feb. 13, 2019