The president typically serves as the public face of federal government advisories — providing sober facts and urgent warnings so Americans can make informed preparations. But as Hurricane Dorian threatened the east coast, President Donald Trump spread information that was overblown or inaccurate.

Dorian was a challenging storm to forecast. Still, Trump’s exaggerations were easily avoidable.

Trump tweeted the storm was headed to Alabama, only for his warnings to be batted down by the National Weather Service in Birmingham minutes later.

He also said he hadn’t heard of a storm reaching Category 5, despite acknowledging the toll of such a hurricane on Florida’s Panhandle at a rally four months ago.

"The public has come to expect factual information from presidents, and Trump’s willingness to offer casual speculative thoughts about such matters is unusual," said David Greenberg, a Rutgers University professor of history and journalism. "Trump’s loose talk at best is embarrassing to him. At worst, it contributes to misinformation that can mislead the public."

The White House did not respond to our questions.

Americans looking for reliable sources of information ahead of a massive hurricane like Dorian should consult the National Hurricane Center. Government-run emergency management agencies such as FloridaDisaster.org or county agencies also provide useful information about evacuations and shelters.

Trump warned several times Sept. 1 that the Atlantic storm would hit several states much harder than expected — even reaching as far west as Alabama. Meteorologists quickly corrected this sweeping projection.

It started with a tweet at 10:51 a.m.: "In addition to Florida - South Carolina, North Carolina, Georgia, and Alabama, will most likely be hit (much) harder than anticipated. Looking like one of the largest hurricanes ever. Already category 5. BE CAREFUL! GOD BLESS EVERYONE!"

Twenty minutes later, the National Weather Service in Birmingham, Ala., corrected Trump without mentioning his name:

"Alabama will NOT see any impacts from #Dorian. We repeat, no impacts from Hurricane #Dorian will be felt across Alabama. The system will remain too far east. #alwx," the weather service tweeted.

Trump continued to muse about the storm’s reach, saying at FEMA headquarters, "And Alabama could even be in for at least some very strong winds and something more than that, it could be. This just came up, unfortunately. ... So, for Alabama, just please be careful also."

Trump may have been referencing a NOAA map showing a 5% chance of tropical storm force winds nipping the southeast corner of Alabama. 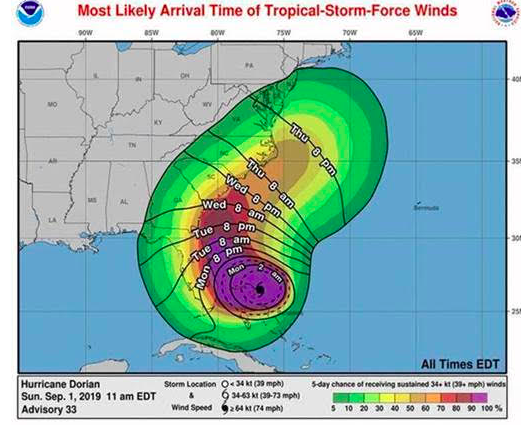 After days of news coverage critical of Trump’s comments about Alabama, Trump gave a televised update about Hurricane Dorian on Sept. 4 next to what he called the "original chart" of the storm’s path. It had been altered to extend the storm’s cone to part of Alabama with a black circle. 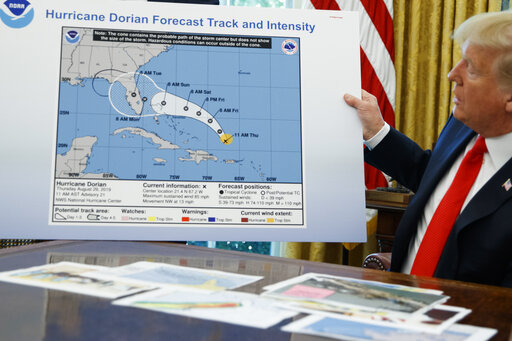 President Donald Trump holds a chart as he talks with reporters after receiving a briefing on Hurricane Dorian in the Oval Office of the White House Sept. 4, 2019, in Washington. (AP)

"It was going to hit not only Florida but Georgia, it was going toward the Gulf, that was what was originally projected," he said.

But a White House photo from Aug. 29 does not show Alabama in NOAA’s hurricane cone map.  And NOAA’s Dorian graphics archive for late August through Sept. 1 shows that the cone was centered over Florida and the Atlantic southeast coast — not Alabama.

As the storm intensified, Trump said he was not sure he had heard of a storm reaching Category 5. That’s the highest tier of the Saffir-Simpson Hurricane Wind Scale for storms with sustained winds of 157 mph and higher.

"We don’t even know what’s coming at us. All we know is it’s possibly the biggest. I’m not sure that I’ve ever even heard of a Category 5. I knew it existed. And I’ve seen some Category 4s; you don’t even see them that much. But a Category 5 is something that I don’t know that I’ve even heard the term other than I know it’s there. That’s the ultimate. And that’s what we have, unfortunately," Trump said.

What makes Trump’s comment more confounding is that he visited an Air Force base in northwestern Florida that sustained considerable damage from Hurricane Michael. That storm made history in 2018 as the first to hit the United States as a Category 5 since 1992.

Speaking of Hurricane Michael at a May 8, 2019, rally, Trump said, "I've just come from a stop at Tyndall Air Force Base, where I saw the devastating effects of that Category 5 hurricane, Category 5. Never heard about Category 5s before, a Category 5 is big stuff."

There were three previous storms that made landfall in the continental United States as a Category 5: a Labor Day storm in the Florida Keys in 1935, Camille on the Gulf Coast in 1969 and Andrew in south Florida in 1992, according to NOAA. (The 1928 San Felipe Hurricane made landfall as a Category 5 Hurricane on Puerto Rico).

Dorian hit the Bahamas as a Category 5 storm Sept. 1. With sustained winds of 185 miles per hour, it tied the record with the Labor Day hurricane in 1935. It weakened as it approached Florida’s east coast.

Update: We updated this story Sept. 4 at 6:40 p.m. to include news of Trump's hurricane map with a black circle around parts of Alabama.

CNN, Trump doesn't think he's 'ever even heard of a Category 5' hurricane. Four such storms have threatened the US since he took office, Sept. 2, 2019

Washington Post, Hurricane Dorian, one of the Atlantic’s most intense storms on record, baffles the president, Sept. 2, 2019

White House, Remarks by President Trump Before Meeting with Bipartisan Members of the House Committee on Ways and Means, Sept. 26, 2017

Tampa Bay Times, 3 reasons Hurricane Dorian has been so hard to forecast, Sept. 2, 2019

NBC, Why does Trump's hurricane map look different than others? Sept. 4, 2019