• Already, an Arizona man died and his wife was hospitalized after self-administering a variant of chloroquine, prompting the Centers for Disease Control and Prevention to send out a warning.

• The American Medical Association says it “strongly opposes” prophylactically prescribing chloroquine as well as pharmacies and hospitals “purchasing excessive amounts” of the medication.

• Some people have health conditions that mean they shouldn’t take chloroquine because of potential side effects.

• Putting too much focus on one specific treatment could make Americans lax about following social distancing guidelines.

In more than half a dozen public events since March 19, President Donald Trump has touted a possible treatment for coronavirus infection — using the malaria drug chloroquine or a related drug hydroxychloroquine, sometimes in combination with the antibiotic azithromycin.

"I hope they use the hydroxychloroquine, and they can also do it with Z-Pak (azithromycin), subject to your doctor's approval and all of that," Trump said at an April 4 briefing. "But I hope they use it, because I'll tell you what: What do you have to lose?"

Trump reiterated praise for chloroquine in his April 5 briefing: "A lot of people are saying that … if you’re a doctor, a nurse, a first responder, a medical person going into hospitals, they say taking it before the fact is good."

When a reporter asked Trump for "the conclusive medical evidence" to support his optimism, Trump dismissed the question as "fake news."

Trump isn’t wrong that this drug combination might prove helpful, at least based on preliminary evidence. The treatment is currently being studied in clinical trials, according to the Centers for Disease Control and Prevention.

But randomized tests — the gold standard of medical evidence — have not been completed, and the lack of rigorous testing as a treatment against coronavirus has led many medical experts to be more cautious than the president. The drug has significant side effects, including damage to the heart and nervous system and suicidal thoughts. And a run on chloroquine could harm patients with lupus and other diseases that the drug is already used for.

Some medical experts are concerned that the president’s words from a White House lectern may be skewing Americans’ perceptions of the best way to fight coronavirus.

Not long after Trump began touting chloroquine, an Arizona man died and his wife was hospitalized after they ingested a fish-tank solvent that includes chloroquine phosphate. The woman told NBC News that they thought the compound was the same as the one Trump cited. Fish-tank cleaners are not the same as the drugs used for malaria, nor are they suitable for human consumption.

A few days later, the CDC released a warning, not just against using the fish-tank cleaner but also the malaria drug itself without a doctor’s orders.

In a statement to PolitiFact, the American Medical Association seconded such concerns, saying that no medication has yet been approved by the Food and Drug Administration for patients with coronavirus, also known as COVID-19. The association said it "strongly opposes" prescribing chloroquine as a preventive measure and also opposes pharmacies and hospitals "purchasing excessive amounts" of the medication. 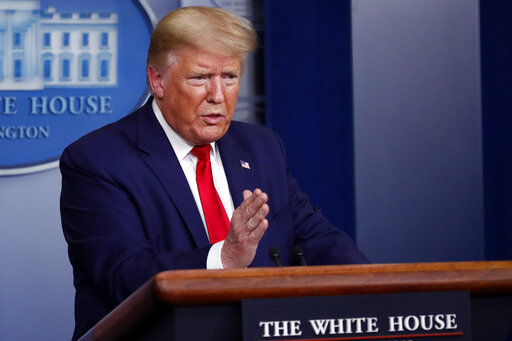 President Donald Trump speaks about the coronavirus at the White House on April 3, 2020. (AP)

On several occasions, Trump has reminded viewers of his briefings to consult with doctors about treatments. But at other times, he has trumpeted his own confidence in chloroquine as a treatment.

"The evidence just isn't there yet to prove that these drugs work, and while the risks from inappropriately prescribing them are rare, they can be serious," said Joel F. Farley, associate head of the department of pharmaceutical care and health systems at the University of Minnesota College of Pharmacy.

Farley said he even worries about patients going through proper channels.

"Even if prescribed by a physician, I am not convinced that patients are being adequately screened or monitored for some of the more serious side effects, like cardiotoxicity," he said. "I have heard anecdotal reports of physicians prescribing these medications for friends and family members, which doesn't always come with an appropriate physical or health screening."

Another worry among medical specialists is the possible stockpiling of chloroquine. This could harm patients with lupus or rheumatoid arthritis, who depend on the drug to treat their own conditions. "Being just stewards of limited resources is essential," the American Medical Association said in its statement.

Finally, focusing on one potential treatment could overshadow the nitty-gritty things Americans need to do on a daily basis to stay safe.

"My biggest concern is that people will believe there’s some magic cure and not follow social distancing and other normal precautions in the belief that there’s a drug to ‘fix this,’" said Ally Dering-Anderson, a clinical associate professor at the University of Nebraska College of Pharmacy.

Donald Trump, remarks at a briefing of the coronavirus task force, April 5, 2020

STAT, "Why President Trump is at odds with his medical experts over using malaria drugs against Covid-19," March 22, 2020

Business Insider, "Trump is touting experimental drugs for COVID-19, saying they're 'not going to hurt' people. But the drugs have severe side effects, and misuse has led to poisoning and even death," Apr 5, 2020

Email interview with Ally Dering-Anderson, a clinical associate professor at the University of Nebraska College of Pharmacy, April 6, 2020

Email interview with Joel F. Farley, associate head of the department of pharmaceutical care and health systems at the University of Minnesota College of Pharmacy, April 6, 2020