Michael Bloomberg wants his supporters to keep two things in mind: he gets things done, and he’s not like President Donald Trump.

A latecomer to the 2020 Democratic presidential primary race, Bloomberg tells voters that he joined the contest because he was concerned that Trump would be re-elected. The country now has a president, Bloomberg says, "who doesn’t respect the Constitution and a Senate that will not protect it."

"This election is about what we will tell our children and our grandchildren that we did at this very moment, and that's why I got into this race," Bloomberg said. "So let me be clear, I am running to defeat Donald Trump."

Bloomberg served as the mayor of New York City for three terms after the 9/11 terrorist attacks. (He followed Rudy Giuliani, now a Trump ally.) Bloomberg tells voters he grew up as a middle class kid and worked his way up. He earned an MBA from Harvard, worked for a financial services company and in 1981 co-founded the financial information and media company Bloomberg LP. Forbes estimates that Bloomberg’s net worth is nearly $62 billion.

Bloomberg says he can build a broad coalition to unite the Democratic Party, to go toe-to-toe with Trump and beat him, and to get Republicans to work with Democrats. He tells voters that there’s a stark contrast between himself and Trump, claiming that Trump breaks promises while he keeps them, that Trump divides people and he unites them, and that Trump is a climate denier while he believes in science.

Bloomberg in Philadelphia also took a swipe at Trump’s wealth, suggesting that Trump is not the billionaire he claims to be: "I get a certain question all the time, and since it is the elephant in the room, I would like to address it again tonight right here," Bloomberg said. "People ask me, ‘Do you really want a general election between two New York billionaires?’ To which I say, ‘Who's the other one?’"

Bloomberg says the Democratic Party needs to nominate someone who’s experienced, and touts his own accomplishments during his tenure as mayor: claiming victories in health care, education and quality of life for New Yorkers, and declines in violent crime in the city.

Biggest applause line: "I am running to defeat Donald Trump."

Post-Trump vision: Bloomberg says he wants to "restore honor" in government and to build a country that Americans are proud of.

Anything else: Bloomberg brings up Trump's constant tweeting and says he wouldn't tweet like Trump. "What about no tweeting from the Oval Office ever again? Yeah, well it's easy for me to say since I can't spell. Then again, neither can Donald." 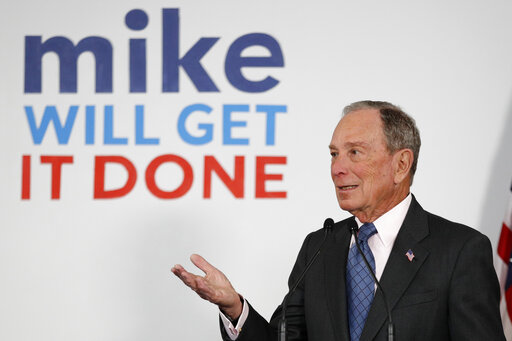 The Bloomberg administration helped people enroll in those plans, said Sherry Glied, a health economist who was assistant secretary for planning and evaluation in the U.S. Department of Health and Human Services.

In 2013, the American Community Survey, produced by the Census Bureau, reported an estimated 1.105 million New York City residents under 65 were without health insurance, a reduction of 695,000, or 38.6%, between 2001 and 2013 (the year before Bloomberg took office and his last year as mayor).

A New York City report shows the city reduced greenhouse gas emissions by 14.8% in 2015 compared with 2005 levels. The city began measuring its carbon footprint under Bloomberg, with the earliest data from 2005.

In Bloomberg’s last year as mayor, 2013, there was a 12.8% reduction in greenhouse gas emissions compared with 2005 levels

An expert told PolitiFact that some observers could take issue with Bloomberg’s claim, because "carbon footprint" is more often associated with a broader definition than the one used by New York City, which focuses on energy, transportation and waste.

The broader definition includes the full life cycle of emissions, such as methane emissions from cattle raised to produce beef eaten in the city. But these emissions are difficult to account for accurately, much less control.

Data supports his claim, though the decline in murders started a decade before he took office. It continued going down after he left.

"Was the slope any steeper during Bloomberg than in the preceding decade? Not at all," Jeffrey Fagan, a professor of law and a professor of epidemiology at Columbia University, told PolitiFact.

Speaking about public schools, says "I raised graduation rates by more than 40%."

This checks out with data from the state Department of Education, as reported by the city. For the class that started high school in September 2001 and left by June 2005, 46.5% graduated. By August of 2013, Bloomberg’s final year in office, 66% of students graduated within four years. That’s a 42% increase.

Life expectancy did go up, but it’s methodologically difficult to figure out why people’s outcomes improved.

Bloomberg as a mayor gained national attention for efforts to restrict tobacco and soda. But it’s not clear that his work on insurance or public health were the driving factors for an increase in life expectancy.

There was a particularly large influx of people moving to New York City during that time, Glied said, and many of them were likelier healthier to begin with.

"It’s hard to parse this," Glied said. "This is the happy moment where everything goes in the right direction, but this is not a randomized experiment. There was no control New York City."

RELATED: Who is Michael Bloomberg? A bio of the Democratic presidential candidate