Democratic presidential candidate Pete Buttigieg waves to supporters outside the Statehouse, Oct. 30, 2019, in Concord, N.H., after filing to be placed on the New Hampshire primary ballot. (AP/Elise Amendola)

As he seeks the Democratic nomination for president, Pete Buttigieg tells primary voters that being in his 30s and a relatively new face on the national scene will help Democrats win on Election Day. History has shown that voters like a candidate who represents a new generation of leadership, he says.

Buttigieg in campaign speeches doesn’t directly attack other Democrats competing for the nomination — a group that includes contenders in their 70s and with experience in federal office, such as a former vice president and U.S. senators. And he doesn’t necessarily say President Donald Trump’s name in remarks that clearly take aim at Trump’s policies and administration.

Protecting one another in the 21st century means dealing with cyber and election security, Buttigieg told voters in West Sacramento, Calif., "you can’t fix that with 17th century technology like putting up a wall."

Buttigieg generally doesn’t dive into the specifics of his policies. Instead, he talks about broad concerns and values that he says all Americans share. He says that values that unite Americans, such as love of country, national security, patriotism and faith, are being manipulated to create division in the country.

But "God does not belong to a political party," he says, and the Second Amendment should not be "twisted into an excuse" to do nothing about gun safety.

Buttigieg says his campaign is about inclusion and speaks with optimism for the future. He promises a forward-looking presidency focused not only on how policies will affect Americans immediately, but in decades to come.

Biggest applause line: "Protecting one another means things like putting an end to the threat of white nationalist violence before it takes one more life in this country or anywhere else in the world."

Post-Trump vision: Buttigieg says that the nation will remain divided once Trump leaves office, but he sees himself as the candidate who can unify the nation.

Music: "High Hopes," by Panic! at the Disco.

Anything else: Buttigieg seems self-aware of his scholarly background and alludes to it in a Q&A segment with voters in California: "Can I get a little academic for just a second?" When asked about his favorite book, he named among them Ulysses by James Joyce. "I don’t know if this is a crowd-pleasing answer," he said to laughter. Buttigieg said it was a "complicated, sophisticated" book about one person going about his life and the importance of the everyday, "which I believe is also the key to good politics." 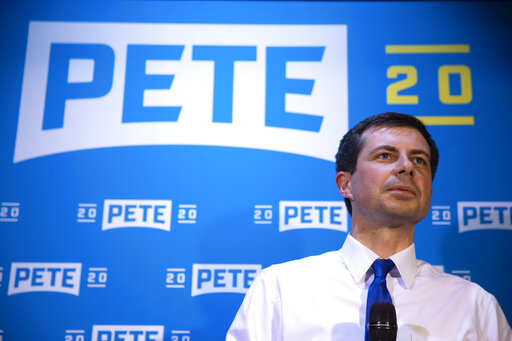 "Every time we have won, at least in the last 50 or 60 years, it’s been with a candidate who called the country to a higher vision of itself, who hadn’t been in Washington for too long, and who spoke for a new generation."

This is Mostly True. What happened in past elections doesn’t determine future outcomes. But looking back at the past 50 years, three Democratic presidential nominees have been elected: Jimmy Carter, Bill Clinton, and Barack Obama.

Before their election, Carter and Clinton served as governors but not in Congress, Obama was a relatively new U.S. senator who wasn’t widely known nationally. Political scientists say that while Clinton had not held elected federal office, he was well-known in national Democratic circles, having chaired the National Governors Association and the Democratic Leadership Council.

Says Amazon does "not have to pay any federal income taxes at all."

We rated this True in April 2018 when Sen. Bernie Sanders said that Amazon paid no federal income tax in 2017. Amazon’s tax returns are private, but experts said that the closest estimates indicate that claim is accurate.

In its annual report filed to the Securities and Exchange Commission in February 2018, Amazon estimated that not only would the company not be paying anything in 2017 federal income taxes, but it would be getting a $137 million tax refund. That doesn’t mean Amazon evaded tax liability — experts said there was no indication of foul play, as corporate tax credits and write-offs for stock-based compensation were enabled by Congress.

"Budgets are being cut for food aid for children."

A proposed change to "categorical eligibility" rules would affect 3.1 million people currently receiving those benefits, according to the USDA’s own estimates. The change would impact children and seniors. Veterans can also receive SNAP benefits, but it’s unclear how many of them do so.

"Children are being ripped out of the arms of their parents at the American border."

This is a reference to the Trump administration’s "zero-tolerance" immigration policy, which at its peak in summer 2018 led to the separation of thousands of immigrant children from their parents as they arrived at the border illegally or without proper documentation.

Family separations under Trump happened systematically as a result of his administration’s policy to prosecute all adults crossing the border illegally. After mounting public pressure and criticism, Trump signed an executive order to stop separating families. The Trump administration under a court order eventually reunited at least 2,800 children with their families.

Federal government and economic data support this claim. Life expectancy as of 2017 was 78.6 years, a decline from 2016 and 2015, when it was 78.7 years, and from 2014, when it was 78.9 years, according to the latest data from the Centers for Disease Control and Prevention.

Data on GDP and the Dow Jones has fluctuated since Buttigieg’s remark in September. Still, the real GDP increased 2.1%  in the third quarter of 2019, said the most recent data from the U.S. Bureau of Economic Analysis. And while the Dow Jones industrial average changes from one day to the other, lately, it generally has been on an upward trend.

RELATED: Who is Pete Buttigieg? A bio of the Democratic presidential candidate