Bernie Sanders gives an hour-long speech in Mason City, Iowa, on Jan. 4, 2020. We broke down his speech here.

Sen. Bernie Sanders, a Vermont Independent running for the Demcratic presidential nomination for the second time, has perfected his campaign stump speech. Railing against the establishment and promising dramatic government intervention, Sanders wields dozens of familiar talking points again and again. In a speech in Mason City, Iowa, Sanders offered versions of more than a dozen specific claims we’ve checked before.

Sanders has run an uncompromisingly left-wing campaign. But he tells his audience to think outside the box when the critics say he is radical and extreme.

Sanders’ speech is heavy on policy substance. In blasting the "rigged economy," Sanders proposes raising the minimum wage to $15 an hour and ensuring equal pay for women. He wants to make it easier for workers to join unions, and he favors increased spending on infrastructure, including clean water. Inequality is affecting the democratic process, too, he says: "Billionaires today are buying elections."

On health care, which he calls a "crisis," Sanders pledges that nobody will pay more than $200 for prescription drugs under his policies. He touts his Medicare for All single-payer plan, which he says will cover eyeglasses, hearing aids, and home health care.

Sanders backs "universal, high quality, affordable child care," and he says the nation can cancel all student debt through a "modest" tax on Wall Street speculation.

On social issues, Sanders says that "women have a right to control their own bodies" and adds that he would only appoint judges who support Roe vs. Wade. On guns, Sanders says he backs universal and extended background checks, supports getting rid of the "gun show loophole," and would "ban the sale and distribution of assault rifles."

At times, Sanders throws in a localized reference, or one pegged to current events. On health care, Sanders cites the special challenges facing rural hospitals. On climate change, Sanders cites the brush fires in Australia and urges the rest of the country to follow Iowa’s lead by investing in wind power.

One of the rare issues in which he invokes President Donald Trump by name is immigration. Sanders says he’s "sick and tired" of Trump "dehumanizing" immigrants and says he will end "all the racist executive orders" Trump has signed.

Biggest applause line: Sanders says he will make marijuana legal in every state and expunge the records of those arrested for possession of marijuana. He says he backs ending the cash bail system as well as "the so-called war on drugs."

Music: "Power to the People" by John Lennon and the Plastic Ono Band.

Post-Trump vision: Sanders doesn’t typically mention Trump by name (the main exception being on immigration policy). His rhetoric focuses more on his own ideas and priorities than Trump.

Anything else: In response to criticisms that his proposals are too radical to win support, Sanders quotes Nelson Mandela: "Everything seems impossible until it happens." 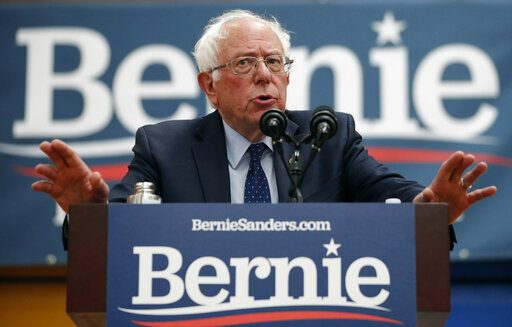 "Three people own more wealth than the bottom half of our nation. Three people, 160 million people."

"Forty-nine percent of all new income goes to the top 1 percent."

We rated this Mostly True. Sanders is referring to growth in pre-tax, pre-government benefit income during the economic recovery following the Great Recession from 2009 to 2017. However, it’s not the only way to measure income, and more comprehensive studies that account for what people pay to and receive from the government show less dramatic comparisons.

"Over the last 45 years … the average worker today … is not making a penny more in real inflation-accounted dollars."

This is incorrect. The median worker in 2018 did make more than one in 1974, once you adjust for inflation. That said, the growth was quite small — a cumulative increase above inflation of only about 11% over those 45 years. In the meantime, it’s also worth noting that the wage data used for this calculation excludes income from Social Security, Medicare, Medicaid, food stamps and refundable tax credits like the earned income tax credit. So it’s an incomplete picture of income.

Women earn 80 cents on the dollar for "equal work."

This is more complicated than it sounds. The median earnings for men and women who worked full-time, year-round were $55,291 and $45,097, respectively, according to 2018 Census Bureau data. In other words, women made 81.6 cents on the dollar compared to men. However, that is not the figure for "equal work" — the gender discrepancy reflects the professions, seniority, and hours worked by the two sexes, whether by choice or by historical patterns, such as discrimination. Attempts to measure the gap between men and women doing equivalent work have shown a narrower difference, though it depends heavily on the specific profession in question.

"We are the only, underline only, major country on earth that does not guarantee health care to all people."

We have rated this True. In fact, there are also numerous non-industrialized countries that offer universal health care.

We rated this Half True, because the specific data point is not as certain as Sanders makes it seem. Policy experts agree that thousands of Americans die because they cannot afford their health care, but his "30,000 people" talking point relies on weak math.

"We pay by far — not even close — the highest prices in the world for prescription drugs."

Studies suggest that the United States, for various reasons, has higher prescription drug costs than other advanced, industrialized nations. But it’s an exaggeration to say that no other nation is close.

"We are spending twice as much per person on health care as any other country."

The United States spent more per capita on health care than every other country studied by the Organization for Economic Cooperation and Development in 2018, and the U.S. total was twice as much as most of the countries studied — but not all of them. The countries that the United States did not exceeded by twice as much in 2018 were Switzerland, Norway, Germany, Sweden, Austria and Denmark.

This is accurate, according to World Prison Brief, a project of the Institute for Crime and Justice Policy Research and the University of London’s Birkbeck College. The United States had 2.12 million imprisoned people, compared to 1.65 million for China, which ranked second. On a per capita basis, the United States also ranked first in the world, ahead of El Salvador and Turkmenistan; China ranked 113rd on a per capita basis.

"Our life expectancy is actually going down."

This is accurate, based on the most recent figures from the federal Centers for Disease Control and Prevention. In the three years since 2014 for which data are available, life expectancy dropped in 2015, stayed the same in 2016 and dropped in 2017. That pattern has not been seen in 100 years. The CDC says suicides and drug overdoses are significant factors in the increase.

RELATED: Who is Bernie Sanders? A bio of the Democratic presidential candidate