After five days on the road in Iowa, PolitiFact reporters reflect on what they saw. (Louis Jacobson/PolitiFact)

IOWA CITY, Iowa — Our job, most days, is to fact-check what candidates say about themselves and their opponents. That usually happens from our desks in Washington and Florida. But in January, it was time to get up close and personal — in Iowa.

All told, we drove roughly 1,100 miles to cover the candidates as they stumped across the state. Stops included town halls for Andrew Yang and Elizabeth Warren in communities along the Mississippi River, a rally for Joe Biden in suburban Des Moines, Bernie Sanders in the college town of Ames, and Amy Klobuchar in Waterloo. Our final stop was a Fox News town hall with Pete Buttigieg.

Iowans respond to criticism of the state’s prominent role

The fact that African American candidates Kamala Harris and Cory Booker, and Julián Castro, who is Latino, dropped out before the caucuses have left some questioning why Iowa — an overwhelmingly white state — should play such a large role in winnowing the field.

After dropping out, Castro said that Iowa is "not reflective of the United States" and "not reflective of the Democratic Party," and he urged that it lose its crucial spot at the head of the line. Biden didn’t say Iowa should lose its status, but he did acknowledge, "Are they representative historically and practically — based on race and creed and color — of the nation? No, they’re not."

Iowa voters we interviewed vigorously defended their special place in the political calendar.

Others said Iowa shares many of the same challenges as other parts of the country, such as grappling with climate change. Connor Shannon, a 19-year-old who works at a sandwich shop, told us after the Sanders rally that he was concerned about flooding in Iowa, which was severe in some locations in 2019.

"More than ever this election cycle, Iowa is a very relevant place," Shannon said. 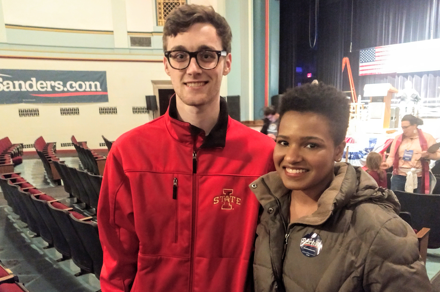 Connor Shannon and Lauren Bey were among the Bernie Sanders supporters who packed a municipal auditorium in Ames, Iowa, for a rally. (Louis Jacobson/PolitiFact)
Iowa voters take their job seriously

Political scientists agree that Iowa has something special to lend the process: A citizenry that is not only used to scrutinizing candidates first-hand, but one that demands it.

According to a recent Iowa Poll, one-third of likely Democratic caucus-goers said it is "extremely important" how a candidate has engaged with voters at events.

"Iowa caucus-goers take the process seriously, and are serious about trying to learn about the candidates and put them on the spot with questions," said David Redlawsk, a University of Delaware political scientist and Iowa caucus expert who has attended more than 100 caucus-related events in Iowa this campaign cycle. "Candidates have to be responsive, which is a learning experience for many of them."

The Democratic caucus process allows voters to switch their allegiance on caucus night if the candidate they support fails to reach 15% in the initial round of voting at a caucus site.

As a result, "voters pay attention to multiple candidates rather than locking into one early, and thus spend more time actually comparing and judging between them than primary voters in other states would," Redlawsk said.

Historically, half or more of Iowa voters are late deciders about who they are going to support.

"There’s an old saying here that you need to shake hands with a candidate seven times before you caucus for them," said Christopher Larimer, a political scientist at the University of Northern Iowa in Cedar Falls. "That seems to hold."

It held for Nadene and Gary Davidson of Cedar Falls, a couple who attended an Amy Klobuchar event in Waterloo. The Davidsons were "95% behind Amy," but they had attended a half dozen events featuring various candidates and were still seeking out more.

Iowans "really want to do their homework and understand what each candidate is really about and make the best decision," Nadene Davidson said. 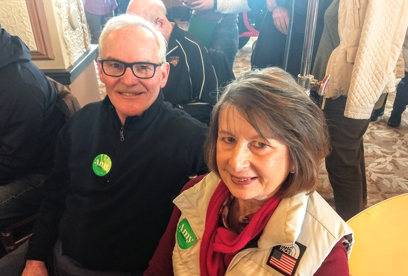 Nadene and Gary Davidson of Cedar Falls, Iowa, who attended an Amy Klobuchar event in Waterloo, Iowa, on Jan. 26. (Louis Jacobson/PolitiFact)
The campaign can be an emotional journey

The events in Iowa offer a more intimate setting where caucusgoers can ask questions or take selfies (and, in the case of Warren, meet her dog, Bailey, too). In the student center at Muscatine Community College, Yang’s speech was more like a conversation than a formal address, with a few dozen voters huddled around tables. He asked the group why Donald Trump won in 2016.

"Because the electoral college sucks!" one voter called out.

"He appealed to people that didn’t feel they had a voice," another voter said.

Iowa voters made clear how complex issues of Medicare for All, trade policy and Social Security affect their everyday lives.

A mother of an 8-year-old with learning disabilities shared with Warren her struggles to get services at school. She fought back tears, and Warren got emotional too. Eventually, they hugged.

At the televised town hall with Buttigieg, a woman who described herself as an anti-abortion Democrat asked Buttigieg whether he would state that voters like her belong in the party, and that the party’s platform should embrace diverse opinions on abortion. Buttigieg said he understood her position but wouldn’t follow her request. The woman was frustrated. Buttigieg said it was up to women to decide what is best.

The personal sharing went both ways. Biden talked about his late son Beau, who died of cancer. Klobuchar spoke of her father’s struggles with alcoholism and her grandfather’s hard work as a miner. Warren tried to appeal to the everywoman in the audience by sharing how her path in life included some unexpected twists and turns, including getting married at age 19 and later getting divorced. 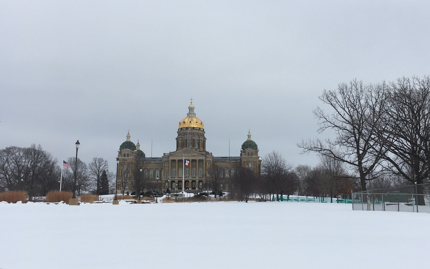 The Iowa state capitol in Des Moines. (Josie Hollingsworth/PolitiFact)
Trump remains the ultimate Democratic rival, even in the primary

Democratic candidates, we found, generally focused more on their differences with Trump than on each other. Still, there were differences in style.

Biden’s speech at a community college near Des Moines was held in front of a calm crowd where voters told us their top priority was to defeat Trump. Biden campaigned as if he was already facing Trump. "The character of the country is on the ballot," he said.

By contrast, Sanders’ event in an auditorium in Ames was boisterous and drew enough voters, many of them college students or recent graduates, to fill up the aisles. The crowd seemed to identify themselves as part of a movement.

With several candidates bunched close together at the top of recent polls, political observers said the outcome on Feb. 3 is hard to predict. While every caucus seems to pack a surprise at the end, said Larimer of the University of Northern Iowa, "I think people are a little more undecided this year" due to the closeness of the race.

PolitiFact is also sending a team to New Hampshire before the Feb. 11 primary. Follow along with all of our coverage @PolitiFact.

Other sources linked in article