Trump vs. Biden: An updated look at the money race

• Donald Trump continues to lead Joe Biden in the money race, but in June, Biden began making up ground.

• In the broadest measurement of fundraising — the candidate’s own haul, the money raised by aligned outside groups, and funds collected by the party’s national committee — Trump has $726 million, compared with $491 million for Biden. While he still trails Trump, that marks an improvement for Biden since late May.

While Joe Biden has improved his standing in the polls in recent weeks, he’s still behind President Donald Trump in the money race. Nevertheless, Biden continues to make up ground and has been eating into Trump’s fundraising advantage.

When we last looked at the two candidates’ fundraising picture on May 29, the combination of money raised by Trump’s campaign, its aligned outside groups, and the Republican National Committee was about $670 million, compared with roughly $423 million for Biden’s campaign, outside groups, and the Democratic National Committee. That amount for Trump was 59% larger than for Biden.

Since then, Biden has shrunk the gap.

The funds raised by those three entities now amount to $726 million for Trump, compared with $491 million for Biden. That’s a 48% edge for Trump.

We’ve combined these three types of money collected on the advice of campaign finance experts, because doing so gives the broadest look at how well-funded each candidate is. The data comes from federal disclosure forms collected by the nonpartisan Center for Responsive Politics.

Currently, Trump’s campaign plus his outside groups have raised $353 million, compared with $316 million for Biden. That’s an 11.7% edge for Trump, which is much closer than the 25.1% edge the president had in this metric in late May. 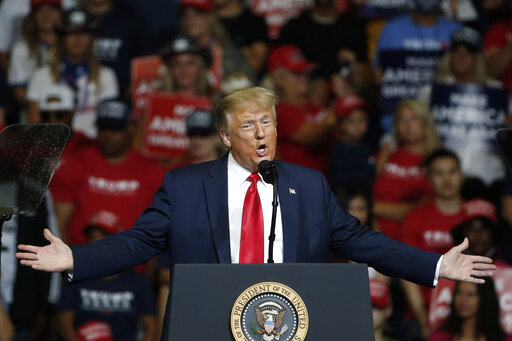 Meanwhile, both candidates are exceeding the fundraising pace of the money leader from the 2016 campaign, Hillary Clinton. At this point in the 2016 campaign, Clinton, plus outside groups and the DNC, had raised $416 million and Trump was trailing Clinton with about $187 million.

Biden is also eating into Trump’s advantage for cash on hand, which refers to money raised but not yet spent.

Trump currently has $214 million on hand, compared with $152 million for Biden. That’s 41% more cash on hand for Trump than for Biden. But that’s closer than Biden was in late May. Back then, Trump was ahead by almost 67%.

The same pattern holds as with fundraising: Biden is catching up most quickly if you look only at the candidate’s campaign and its aligned outside groups.

It remains to be seen whether the coronavirus pandemic and the resulting economic downturn will affect fundraising for either candidate through the rest of the summer and the fall.