President Donald Trump’s first town hall of 2020 was in Scranton, Pa. — birthplace of Democratic presidential candidate Joe Biden and a state that was key to Trump’s 2016 victory.

Trump directed much of his criticism at Biden at the Fox News event, poking fun at his gaffes and rehashing the fact that his son Hunter Biden served on the board of an energy company in Ukraine.

Trump said he had been "all set" to take on Sen. Bernie Sanders, whom he falsely called a "communist," but that the matchup was looking less likely. Fox News will host a town hall with Sanders on March 9 in Detroit, Mich.

The town hall included some critical questions by audience members. One undecided voter told Trump at the "outset of the coronavirus, your administration’s response seemed to some as being confusing or minimizing." Another asked Trump if his message could be delivered without "controversial rhetoric."

Trump presented himself as a leader who inherited a heap of problems from Barack Obama and delivered on his campaign promises anyway. We fact-checked several of his misleading or inaccurate claims.

Says the administration has been "given tremendous marks" for its coronavirus response. "You look at Gallup poll, you look at other polls, for the way we have handled it."

This is misleading. The Gallup poll is from the first half of February, before any American died within the United States, and before major news reports about flaws in early CDC test kits.

A Gallup poll conducted Feb. 3-16 found that three in four Americans said they were very confident (31%) or somewhat confident (46%) in the federal government's ability to handle an outbreak of the coronavirus. The poll included a random sample of 1,028 adults and a margin of error of 4 percentage points.

The poll started days after the Trump administration announced it would suspend entry of foreign nationals into the U.S. among those who had traveled to China in the prior two weeks. The poll took place before any deaths within the U.S., although one American died in China in the middle of the polling period. According to the CDC as of March 5, there were a total of 99 cases in the U.S., 10 deaths and cases in 13 states.

A more recent poll, done by MorningConsult, shows that approval of Trump’s response has been dropping. The Feb. 28-March 1 survey showed that 49% of voters approved of Trump’s response to the outbreak, down from 56% in a Feb. 24-26 survey — a decline fueled by drops among independents and Democrats.

There is some good news for the federal government in the most recent poll: a majority of voters approve of the CDC’s handling the spread of coronavirus, Trump declaring a public health emergency and seeking emergency funding, and appointing Pence to coordinate U.S. efforts 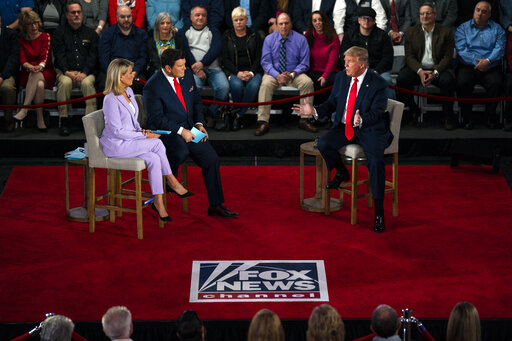 Says Hunter Biden "didn't have a job, was unfortunately, sadly, the military was a very sad experience for him. He goes out, he gets $3 million plus $183,000 a month to be a board member of a company that a lot of people said was corrupt."

Trump misleads when he portrays Hunter Biden as unemployed when he joined the board of a natural gas company, Burisma Holdings, in 2014. At the time, Hunter Biden was a counsel to Boies, Schiller and Flexner, a national law firm based in New York, according to a statement from Burisma. He was also chairman of the board of Rosemont Seneca Advisors and an adjunct professor at Georgetown University’s master’s program in the school of foreign service.

Hunter Biden was discharged from the Navy Reserve in 2014 following a failed drug test for cocaine.

The details of how much Hunter Biden was paid by Burisma have been part of the mystery surrounding what he did on the board. Experts have said that Hunter’s position on the board presented a serious conflict of interest for his father when he was vice president and engaging in Ukraine. However, there has been no finding of wrongdoing by his father and no charge of specific wrongdoing against Hunter Biden.

Hunter Biden "walks out of China with a $1.5 billion for a fund."

This lacks evidence. We have looked at Hunter Biden’s business dealings in China and found no evidence that he actually obtained $1.5 billion.

A Wall Street Journal article in July 2014 reported that Hunter Biden’s firm was "aiming to raise about $1.5 billion." This means that, a full six months after Hunter Biden left China, the $1.5 billion figure was aspirational, not confirmed. This undermines Trump’s version of events, which is that Biden quickly pocketed $1.5 billion after a meeting while the elder Biden was vice president.

"So mentally I'm all set for Bernie — communist, I had everything down."

This is False. Sanders is not a communist.

Experts said there are clear differences between Sanders’ democratic socialism — which focuses on democratically achieved expansion of social welfare programs — and any commonly accepted definition of communism. Sanders isn’t pushing for authoritarian rule, government ownership of all private property or an end to capitalism. Instead, he wants "Medicare for All" and free access to public colleges and universities.

This is correct. Biden’s campaign said he misspoke during the South Carolina debate.

Biden meant to say 150,000, the number of firearm homicides. That number checks out with the CDC data. 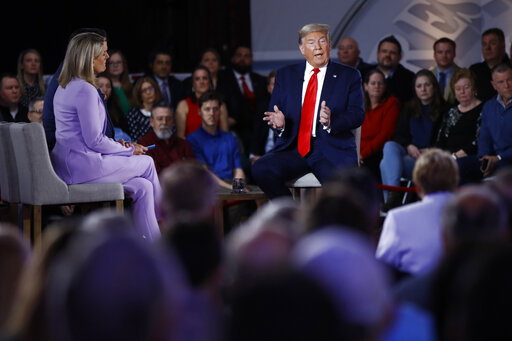 Speaking of illegal immigration, "And we have the best numbers that we’ve had in many, many months. ... I guess it's now nine or 10 months where the numbers are way down."

It is true that apprehensions at the southwest border are down compared with May 2019, as Trump’s re-election campaign pointed out. However, May apprehensions were the highest month in fiscal year 2019.

Apprehensions have generally been decreasing since May (though there were 862 more apprehensions in February than in January). An immigration expert told PolitiFact that at least two factors had likely influenced a decline in border apprehensions: the U.S. implementation of the "Remain in Mexico" policy, known as Migrant Protection Protocols, and Mexico's increased enforcement actions at its own southern border.

"The wall is way under construction, we're up to 129 miles already. ... We will have by early next year almost 500 miles of wall."

Nearly all of the construction at the southwest border has been to replace existing barriers, not to create a wall that wasn’t there before.

The nearly 2,000-mile southwest border had 654 miles of primary barriers before Trump was elected. Three years into Trump’s presidency, that has increased by 1 mile, to 655.

U.S. Customs and Border Protection told PolitiFact that as of Feb. 28, the Trump administration had worked on:

Whether the administration can complete around 400 more miles in one year is uncertain. CBP awarded a series of construction contracts in 2019 and February, but the agency did not provide expected completion dates for all projects.

As president, his administration has sought in court to repeal Obamacare without offering any replacement that might maintain its core protections. That includes protections for pre-existing conditions.

This is a repeated Mostly False claim.

The short-term, limited-duration plans he’s talking about are not new. They have been around for decades in various forms and are generally considered a stopgap solution for people between jobs or attending school. These plans offer fewer benefits than what’s covered in plans under Obamacare and can bar people with health conditions from enrolling.

"I opened up LNG plants in Louisiana where they were for years, for 10, 12, 14 years and longer trying to get permits."

The Cameron LNG project has three plants that chill down natural gas until it becomes a liquid to be shipped worldwide.

According to the company website, in 2014 the Federal Energy Regulatory Commission issued the final environmental impact statement to construct and operate the liquefaction facility. The company got its first federal approval in 2012. In 2016, Washington gave permission to add another two liquefaction lines, although the company hasn’t decided to move ahead on those.

"But (Obama) said, the biggest problem we have is North Korea. That's what you're alluding to. And I have a good relationship with him. I said, did you ever call him? The answer is, yes, he did. But I will tell you, I don't think they admit that. Maybe they do, but called many times. And Kim Jong Un did not want to talk to him."

We previously rated Trump’s story of Kim Jong Un rejecting calls from the Obama administration as False for lack of evidence.

The public record shows the Obama administration rejected the idea of meetings of any sort until North Korea promised to back off of its nuclear program and accept international inspections.

While the administration held out hope of North Korea meeting those preconditions during Obama’s first term, in the second, it took a harder line. There is no evidence that Obama begged for a meeting.

Reporting by Jon Greenberg, Julie Appleby and Eric Litke contributed to this story.

Ronna McDaniel
stated on February 22, 2021 a tweet:
Says the American Civil Liberties Union opposes H.R. 1 on grounds that “it threatens our freedom of speech.”

Joe Biden
stated on February 19, 2021 a speech:
“The vast majority of the American people” support Biden’s $1.9 trillion rescue plan, “including a majority of Republicans.”

Beto O'Rourke
stated on February 16, 2021 a tweet:
“Energy experts and State House Dems, among others, were warning of this (the Texas power blackout) for years.”

Joe Biden
stated on February 5, 2021 an interview on CBS:
“If you're making less than $15 an hour, you're living below the poverty wage.”

Ron Klain
stated on January 24, 2021 an interview on Meet the Press:
"The process to distribute the vaccine, particularly outside of nursing homes and hospitals out into the community as a whole, did not really exist when we came into the White House."

Devin Nunes
stated on January 10, 2021 an interview on Fox:
“Republicans have no way to communicate” after tech companies cut off Parler.

Donald Trump
stated on December 9, 2020 a tweet:
“No candidate has ever won both Florida and Ohio and lost.”