Lou Dobbs
stated on March 2, 2020 in a TV interview:
The United States is “actually screening fewer people (for the coronavirus than other countries) because we don't have appropriate testing."

Hawaii state Department of Health microbiologist Mark Nagata demonstrates the process for testing a sample for coronavirus at the department's laboratory in Pearl City, Hawaii on March 3, 2020. (AP/McAvoy)

Fox Business host Lou Dobbs, a vocal supporter of President Donald Trump and his allies, challenged the president’s top health official recently on the administration’s handling of the 2019 coronavirus outbreak.

Dobbs criticized Health and Human Secretary Alex Azar over a lack of transparency in the agency’s handling of COVID-19, which has infected nearly 91,000 people globally across 73 countries and led to more than nine American deaths.

"There’s a better ratio of testing for the coronavirus in other countries than we maintain here," Dobbs said during the March 2 interview on his TV show. "We’re actually screening fewer people because we don’t have appropriate testing."

Azar countered that the Trump administration has taken recent steps to roll back regulations and increase the availability of diagnostic test kits to "hundreds and thousands and millions."

The United States is set to significantly expand its testing capabilities in the coming days and weeks, but Dobbs is correct that the country has lagged behind other nations so far.

"It is true that diagnostic capacity in the U.S. has been lower than in some other countries, but that is changing," said Caitlin Rivers, an epidemiologist at the Johns Hopkins Center for Health Security.

The trouble with testing numbers

It’s hard to pinpoint how many people have been tested for the coronavirus, both in the U.S. and around the world. The World Health Organization doesn’t track the number of tests administered in each country, and the numbers that are available are constantly updating.

In a statement to PolitiFact, a Fox News spokesperson representing Dobbs cited data from the WorldOMeter, a real-time tool that "shows estimated current numbers based on statistics and projections from the most reputable official organizations," according to its website.

Using estimates derived from official government sources, the WorldOMeter says at least eight countries — South Korea, Italy, Austria, Switzerland, the United Kingdom, Finland, Vietnam and Turkey — have given more tests relative to the size of their populations than the United States.

That lines up with experts’ analyses and with what multiple news outlets have reported.

South Korea ramped up testing by building drive-thru screening clinics for speedy assessments, according to local reports. Other countries, like Switzerland, the United Kingdom and Italy have also conducted thousands of diagnostic tests.

"We have done nothing like what other countries have done," Lipsitch said, noting that the U.S. had, until recently, limited not only the number of labs that were allowed to conduct tests on suspected cases, but also the number of patients that were eligible to be screened.

It’s difficult to say just how far behind the U.S. has fallen, due to the murkiness around the number of administered tests. The Centers for Disease Control and Prevention stopped releasing a public count of tests on March 2.

The administration’s public statements haven’t cleared it up. On Feb. 29, the CDC reported testing 472 Americans. A day later, Azar told ABC News the U.S. had tested over 3,600 people. And a spokesperson for HHS, Azar’s agency, told us on March 3 that the CDC had tested samples from more than 1,200 patients.

"I don't know how to track U.S. tests any more," Lipsitch said. 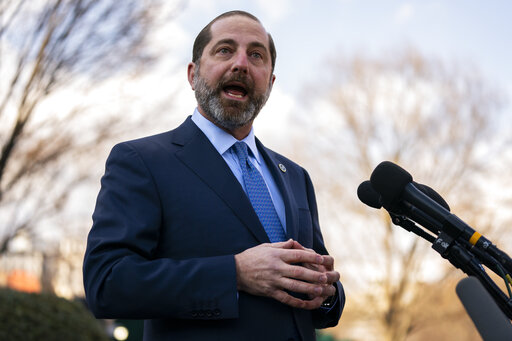 Health and Human Services Secretary Alex Azar speaks at the White House about the coronavirus on Feb. 28, 2020, in Washington. (AP/Vucci)

The CDC stopped posting testing data as more state and local public-health labs have been brought into the fold, said Nancy Messonnier, a top CDC official, said during a March 3 briefing.

"With more and more testing done at states, these numbers would not be representative of the testing being done nationally," she said.

An HHS spokesperson told us that the department doesn’t know how many additional tests have been administered by those state and local labs, adding that those labs can now test up to 15,000 people and are expected to be able to test as many as 75,000 people by March 6.

The U.S. test count should rise into the millions as IDT, a commercial manufacturer, and other commercial and academic labs begin producing their own tests soon, according to HHS.

Why the United States lagged behind

The government’s initial testing effort was hindered by flaws with the CDC’s early test kits and restrictions that had limited which labs could run the tests and which patients could be tested.

When the first U.S. coronavirus was detected, the country brushed aside the WHO test used by other nations and leaned on the CDC to develop and mass produce a more complicated test capable of detecting other viruses in addition to the coronavirus, according to reports.

The test kits went out in early February. But some state labs that received them reported that flaws in the tests were triggering inconclusive results. Those states had to ship samples out to the CDC’s offices in Atlanta for results until the CDC fixed the problem weeks later.

Since then, the Food and Drug Administration has given labs and hospitals across the country the go-ahead to administer their own tests before the FDA finishes reviewing them, so long as those tests are proven to work. That should lead to more testing, experts said.

The CDC also modified its screening criteria to expand testing for some people with severe respiratory symptoms who did not travel to China or come into known contact with a coronavirus patient. Previously, travel to China or exposure to the virus were preconditions for screening.

Adequate testing is essential to getting an accurate count of U.S. cases, experts said.

Testing is also key for treating patients and identifying people who might be infected but don’t show symptoms, said Richard Watanabe, professor of preventive medicine at the University of Southern California.

"The latest data suggests the incubation period for COVID-19 can be as long as a couple of weeks," Watanabe said.

Despite the recent acceleration, Lipsitch said U.S. testing is happening "very slowly and at a level that is still paltry" compared with some other countries.

Dobbs said that the United States is "actually screening fewer people (for the coronavirus than other countries) because we don’t have appropriate testing."

Experts told us that to date, the United States has lagged behind other countries, though numbers are imprecise. An error with the CDC’s early test kits contributed to the United States’ relatively low screening numbers. The administration has taken steps to make testing more widely available.

With that additional information, we rate Dobbs’ statement Mostly True.

Centers for Disease Control and Prevention, "Transcript for the CDC Telebriefing Update on COVID-19," March 3, 2020

Centers for Disease Control and Prevention, "Evaluating and Reporting Persons Under Investigation (PUI)," March 3, 2020 (accessed via the Internet Archive)

Centers for Disease Control and Prevention, "Coronavirus Disease 2019 (COVID-19) in the U.S." March 3, 2020 (accessed via the Internet Archive)

Centers for Disease Control and Prevention, "Coronavirus Disease 2019 (COVID-19) in the U.S." March 2, 2020 (accessed via the Internet Archive)

Centers for Disease Control and Prevention, "Transcript for the CDC Telebriefing Update on COVID-19," Feb. 29, 2020

Centers for Disease Control and Prevention, "Transcript for the CDC Telebriefing Update on COVID-19," Feb. 28, 2020

Centers for Disease Control and Prevention, "Evaluating and Reporting Persons Under Investigation (PUI)," Feb. 26, 2020 (accessed via the Internet Archive)

Fortune, "Other countries are testing patients for coronavirus by the tens of thousands. Why the U.S. is so far behind," March 3, 2020

The Associated Press, "Frustration rising over lack of access to coronavirus tests," March 3, 2020

Business Insider, "Delays and errors have put the US far behind other countries in testing and treating coronavirus patients: 'We are trotting along while they're racing,'" March 2, 2020

Department of Health and Social Care on Twitter, March 2, 2020

ProPublica, "Key Missteps at the CDC Have Set Back Its Ability to Detect the Potential Spread of Coronavirus," Feb. 28, 2020

Email interview with Caitlin Rivers, senior associate at the Johns Hopkins Center for Health Security and assistant professor in the department of environmental health and engineering, March 3, 2020

Email interview with Richard Watanabe, professor of preventive medicine at the University of Southern California’s Kerk School of Medicine, March 3, 2020

Email correspondence with Richard Quartarone, press officer for the Centers for Disease Control and Prevention, March 3, 2020

Statement from the Department of Health and Human Services, March 3, 2020