The way President Donald Trump sees it, there’s nothing wrong with calling the new coronavirus the "Chinese virus." But the World Health Organization, the director of the U.S. Centers for Disease Control and Prevention, and other health experts say that phrasing is wrong.

Reporters during White House briefings on the coronavirus have asked Trump why he uses that phrase even when critics say it creates a stigma and is racist.

Trump at a March 17 briefing suggested he was using the term in reaction to moves from China that he didn’t like.

Trump said he didn’t think his preferred phrase created a stigma. "I think saying that our military gave it to them creates a stigma."

On March 18, Trump again defended his phrasing after a reporter said there had been dozens of incidents of bias against Chinese Americans in the United States, and that the U.S. Health and Human Services secretary said ethnicity does not cause the novel coronavirus.

Trump added that "China tried to say at one point, maybe they stopped now" that the coronavirus was caused by American soldiers.

A spokesman for China’s foreign ministry on March 12 suggested, without providing evidence, that the United States was to blame for the coronavirus in China. "It might be U.S. army who brought the epidemic to Wuhan," Zhao Lijian tweeted.

The World Health Organization has said that an outbreak of COVID-19, the respiratory disease caused by a new coronavirus, began in Wuhan, China, in December 2019. It has not linked it to U.S. troops. China’s initial response to the outbreak has been criticized as slow and secretive.

Still, applying the word "Chinese" to a virus that’s now all around the world, that has upended daily life worldwide, and fueled global anxiety and fear is problematic and stigmatizes Chinese individuals, experts told PolitiFact.

At a March 10 House hearing, Rep. Lois Frankel, D-Fla., asked CDC director Robert Redfield whether he agreed that calling the coronavirus the "Chinese coronavirus" was "absolutely wrong and inappropriate."

Neither the White House nor Trump’s re-election campaign provided an on-the-record response for PolitiFact’s story. 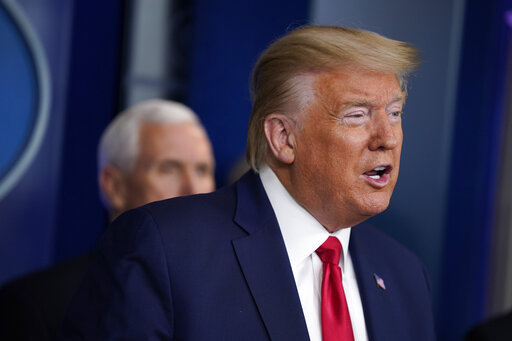 President Donald Trump speaks during press briefing with the Coronavirus Task Force, at the White House, March 18, 2020, in Washington. (AP/Evan Vucci)
Impact of using a geographic term for the virus

Geographic terms have been adopted in the past for diseases, such as the Spanish flu and Middle East Respiratory Syndrome. And Trump isn’t the only one to have used the phrase "Chinese virus."

The March 12 Trump campaign tweet claimed Trump was accused of "racism and xenophobia for stating the facts."

"This is a foreign virus that originated in Wuhan, China. Just a few weeks ago, Democrats and the media were all saying it!" the tweet said.

But experts say it’s best to not name diseases after geographic places.

WHO in 2015 issued best practices guidance for the naming of new human infectious diseases, with the aim of minimizing "unnecessary negative impact" on industries and to avoid offending any cultural, social, national, regional, professional or ethnic groups. The guidance said disease names should not include geographic locations, such as cities, countries, regions and continents.

Using the geographic term suggests that they may be more susceptible to the virus and more likely to spread COVID-19, Petrun Sayers said.

"These types of assumptions are incorrect, because viruses do not target specific racial or ethnic groups, and have implications for shaping the general public’s attitudes towards persons of Asian origin," Petrun Sayers said.

The stigma can have a long-lasting effect.

Research about severe acute respiratory syndrome, or SARS, says that residents in Hong Kong, near the center of the 2003 outbreak, experienced shunning, insults and exclusion from professional and social circles, Petrun Sayers said. "Discrimination creates undeserved distress for those affected or believed to be affected and can severely decrease their quality of life," she said.

The term can also hold back individuals from seeking medical care out of fear of being stigmatized, Molina said. "They will be less likely to seek medical care, which undermines all of our public health," she said.

"At a time when we are worried about how social isolation is affecting us," she said. "We need to understand that racial animus is only going to make things worse for those groups."

Phone interview, Natalia Molina, a professor of American studies and ethnicity at the University of Southern California, March 17, 2020

Sciencedirect.com, The experience of SARS-related stigma at Amoy Gardens, available online May 23, 2005

PolitiFact, Fact-checking Donald Trump’s mistakes about European travel due to coronavirus, May 12, 2020

The Wall Street Journal, How It All Started: China’s Early Coronavirus Missteps, March 6, 2020

Nature.com, What China’s coronavirus response can teach the rest of the world, March 17, 2020