Will COVID-19 force a massive absentee vote in November election?

The coronavirus pandemic has already forced more than a half dozen states to delay their Democratic primaries, with more states likely to follow. This has raised an urgent question: Could the pandemic still be dangerous enough in November that the general election will have to be held mostly or entirely by mail?

On the federal level, Sens. Ron Wyden, D-Ore., and Amy Klobuchar, D-Minn., have introduced a measure that would greatly increase the role of voting by mail, including the allocation of federal money to purchase equipment and cover printing and mailing costs. The bill would also expand in-person early voting to decrease lines on Election Day.

Some election officials, including those who have advocated vote-by-mail for years, say that dramatically expanding mail balloting is feasible, given the amount of time between now and the November election. But making it happen would require aggressive action and governmental cooperation, experts say.

"Every state will have to think about the possibility that the November elections will be mostly by mail, or potentially all by mail," said Ohio State University law professor Edward B. Foley.

While many states now have either all-mail elections or no-excuse absentee voting, those that don’t would have to change their laws to allow "fear of becoming infected" to be counted as a legitimate reason for securing an absentee ballot, he said. For states that aren’t used to counting large numbers of absentee ballots, Foley said, "the ramp-up will be huge."

Still, "if there is political will to create postal voting for the entire nation in time for the November election, it can be done," said Richard Winger, editor of Ballot Access News.

Where is voting by mail common today?

Five states currently conduct all elections entirely by mail: Colorado, Hawaii, Oregon, Washington and Utah, according to the National Conference of State Legislatures. In California, some counties are currently permitted to conduct all-mail elections, and after 2020, the option will be available to all counties in the state.

In two-thirds of states, any qualified voter may vote absentee without offering an excuse, while in one-third of states, an excuse is required. Some states offer a permanent absentee-ballot list: voters who ask to be added to the list automatically receive an absentee ballot for future elections.

What are the legal obstacles to voting by mail?

While state and local officials hold broad sway over the details of many election issues, the Constitution grants Congress authority as well. Congress has used this to pass the "motor voter" registration law in 1993 and the Help America Vote Act of 2002, which helped states update voting systems.

"The most helpful thing Congress could do today is to put federal dollars into the effort," Foley said. "We know it will be hard for states to expand rapidly to voting by mail. But Congress could put the money in and attach strings to it."

The Democratic National Committee backs the Wyden-Klobuchar proposal. "No voter should have to put their health and safety at risk to exercise their constitutional rights at the ballot box," DNC Chairman Tom Perez told PolitiFact in a statement. (The White House and the Trump campaign declined to comment. On March 16, Trump said decisions about postponing primaries should be left up to the states.)

Whitney Quesenbery, director of the Center for Civic Design, a firm that consults with state and local governments, said she feels optimistic based on strides made by Michigan and Pennsylvania toward no-excuse absentee balloting in the past few years.

But there will also be lots of loose ends for lawmakers to tie up. "It will be a lot of work," she said.

How have state and local officials implemented voting by mail already?

While states set laws about voting by mail or absentee voting, decisions about how much any particular method of voting is promoted are left up to local elections officials.  Some rural counties have a few thousand voters, while urban counties can have more than 1 million. That means that nationwide, there will be thousands of election officials contemplating how to run an election amid COVID-19.

Counties that have long embraced absentee voting should have an easier time. In Lee County, Fla., about half of voters now cast ballots by mail. If that increases beyond 70%, election officials say they will need more money and will have to increase the number of temporary election workers to process ballots requests. The number is even greater in Pinellas County, where 60% to 70% vote absentee.

But in Broward County in 2016, voting in person was more popular than by mail, so it would be more of an adjustment if the county ends up with a massive increase in absentee ballots.

Florida county election supervisors have asked the state to add an extra week of early voting. Supervisors anticipate that absentee ballot voting could triple or quadruple.

"We planned for years for cybersecurity, for hurricanes. We didn’t plan for a pandemic," said Tammy Jones, president of the Florida Supervisors of Elections and supervisor in Levy County.

In Ohio, where a March 17 Democratic primary was scratched over health concerns, a proposed bill would allow the state to mail a postage-paid absentee ballot request form to voters who didn’t cast ballots during early voting. If the legislation passes, the election will be held June 2. 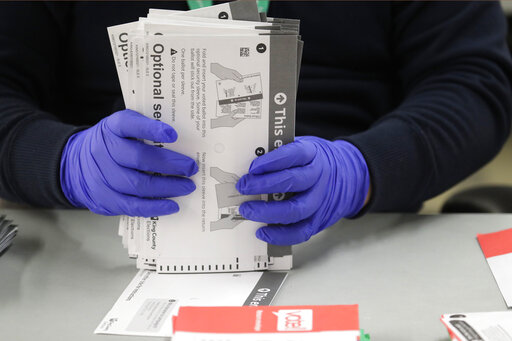 The pluses and minuses of moving to voting by mail

Here’s the good news: Beyond limiting infections, there are a number of benefits to moving to voting by mail. It’s more convenient and less rushed for voters; it may be less expensive for jurisdictions once it’s enacted permanently; and it may boost turnout.

However, voting by mail also brings concerns that will have to be addressed:

• A possible increase in voter errors made at home, since election officials won’t be standing nearby to help. This means more ballots could be rejected and not counted.

• A need for voter education for people who are unaccustomed to absentee voting. Voters will need reminders to sign their ballots, and elections officials will need to increase public outreach to dispel myths about absentee ballots, such as the one that those ballots aren’t counted unless an election is close.

• Some groups have less convenient access to mail than others do, such as residents of Native American reservations. Mail voting also poses challenges for voters who move frequently, or who have language or literacy issues. And some disabled voters, including those who are blind, cannot effectively cast mail ballots without assistance.

• Voting at home could lead to coercion by abusive spouses or other relatives.

• Voter fraud could increase. While voter fraud overall is considered uncommon, Foley said, "we unfortunately have to acknowledge that vote by mail does raise the risk of fraud. Where we do see fraud in elections, it's usually in absentee ballots," such as the case of a North Carolina congressional race in 2018 that forced the election to be re-run the following year.

These downsides of voting by mail, however, can be tolerable as long as the right steps are taken to minimize them, experts say.

"Vote-by-mail was expanding rapidly before this crisis, and it is bound to be ubiquitous before too long," said Drew Spencer Penrose, law and policy director for FairVote, a voting advocacy group.

Vox, Voting by mail could get a boost during the US coronavirus outbreak, March 17, 2020

USA Today op-ed George Stern, Election protection in the coronavirus era: All Americans should vote by mail in fall 2020, March 18, 2020

Pew Research, How Americans view some of the voting policies approved at the ballot box, Nov. 15, 2018

National Conference of State Legislatures, "Voting Outside the Polling Place: Absentee, All-Mail and other Voting at Home Options," Feb. 20, 2020

Politico, Why vote-by-mail may not save our elections from the virus’ disruption, March 17, 2020

Interview with Whitney Quesenbery, director of the Center for Civic Design, March 23, 2020