Fact-checking misinformation about the George Floyd protests in Minneapolis

Protestors demonstrate outside of a burning Minneapolis 3rd Police Precinct on May 28, 2020, in Minneapolis. (AP)

Demonstrations erupted in Minneapolis over the death of George Floyd, who died May 25 after a white police officer pinned his knee against the black man’s neck.

On May 28, protesters lit the police precinct on fire, and President Donald Trump tweeted "when the looting starts, the shooting starts." A CNN reporter was arrested on live television. As police pushed back demonstrators with tear gas and rubber bullets, the Minneapolis Fire Department responded to roughly 30 fires around the city.

A false conspiracy theory spread that Floyd’s death was staged. An image on Instagram alleged without evidence that a police officer was to blame for inciting violence at some of the protests. And some users took photos of coronavirus reopen protests out-of-context to make a point about the police response.

PolitiFact fact-checked several of the most popular claims about the Minneapolis protests below. The posts were flagged as part of Facebook’s efforts to combat false news and misinformation on its News Feed. (Read more about our partnership with Facebook.)

If you see another suspicious post about the Minneapolis protests, send it to [email protected].

As protests in Minneapolis turned violent, some Facebook users said Floyd’s death was staged by police. We rated those posts Pants on Fire!

A May 28 post claims the death of Floyd was a "staged event." Floyd, a 46-year-old black man, died in police custody May 25 after being handcuffed and pinned down by a white officer.

"I think there is at the very least the ‘possibility,’ that this was a filmed public execution of a black man by a white cop, with the purpose of creating racial tensions and driving a wedge in the growing group of anti deep state sentiment from comon (sic) people, that have already been psychologically traumatized by Covid 19 fears," reads the post.

There is no evidence to back it up. We reached out to the original poster for a comment, but we haven’t heard back.

After a video of Floyd’s death started to circulate on social media, protesters took to the streets in Minneapolis. Four police officers involved in the incident were fired. Derek Chauvin, the officer who knelt on Floyd’s neck, was taken into custody and charged with third-degree murder and manslaughter on May 29.

The FBI and Justice Department are investigating Floyd’s death as a possible violation of federal civil rights laws. Hennepin County and federal prosecutors are also looking into the possibility of bringing charges against the officers involved in the incident. We reached out to the Minneapolis Police Department for a comment, but we haven’t heard back.

None of the investigations have disputed that the video shows Floyd’s death — and that Chauvin kneeled on Floyd’s neck, killing him.

The nearly 1,000-word Facebook post weaves together a series of speculations and unrelated facts, the motives of the officers and the timing of the incident to spin an unproven conspiracy theory. None of it confirms that the incident was staged. 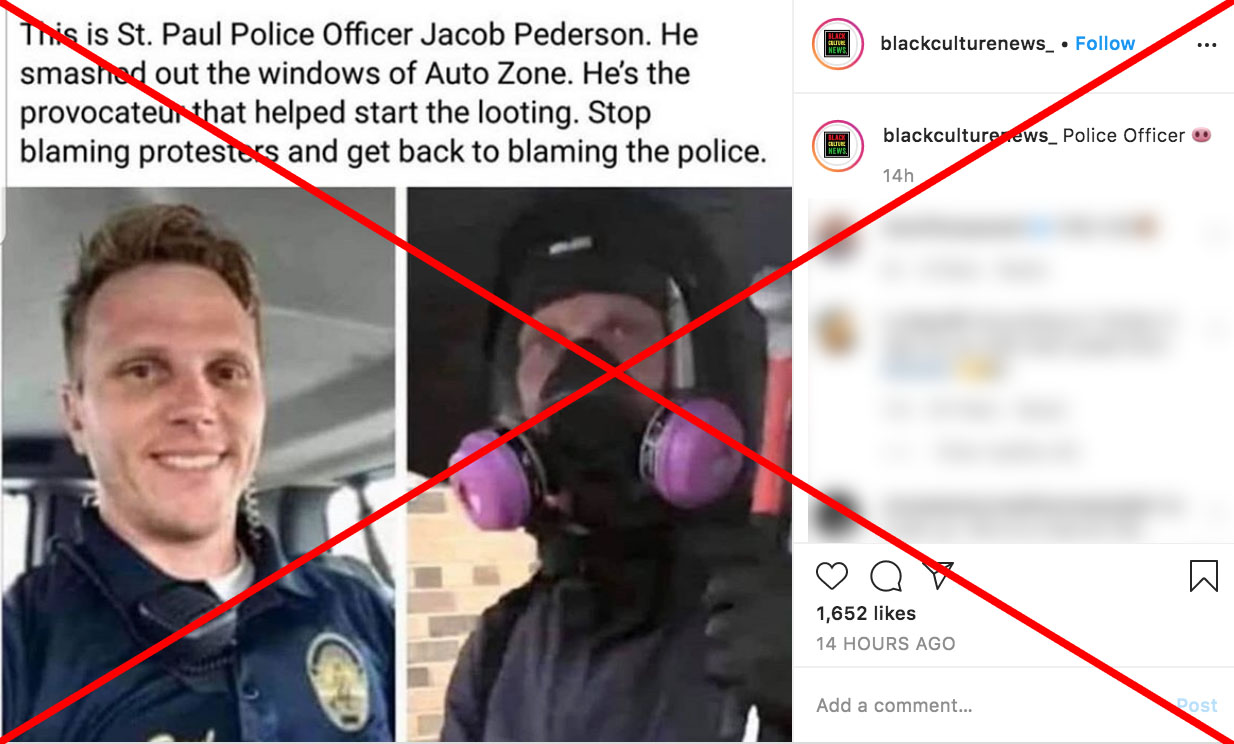 An image being shared on social media alleges an officer from a neighboring jurisdiction instigated the violence. Police have denied it.

"This is St. Paul police officer Jacob Pederson," a May 28 Instagram post says. "He smashed out the windows of Auto Zone. He’s the provocateur that helped start the looting. Stop blaming protesters and get back to blaming the police."

The Saint Paul Police Department denies that the person in the footage is Pederson.

"RUMOR CONTROL," the department tweeted. "We are aware of the social media post that erroneously identifies one of our officers as the person caught on video breaking windows in Minneapolis. We’ve seen it. We’ve looked into it. And it’s false."

The department went on to say in a series of tweets:

"So we also want to be perfectly clear about this: The person in the video is not our officer. We don’t know who that person is, but we hope he’s identified and held accountable for his actions. Our officer? He’s been working hard, keeping people and property safe, and protecting the right to peacefully assemble. It’s sad that people would post and share this untrue information adding more confusion to an already painful time in our community."

As of now, we have not confirmed the identity of the person in the video.

No evidence Target looted for not serving protesters

A Facebook user claimed that a Target store in Minneapolis was looted for supporting police by "refusing to sell milk to tear-gassed" protesters. People who have been hit by teargas sometimes use milk to ease the stinging effect.

"I was just informed that the reason they looted that Target in Minneapolis is because it was supporting the Minneapolis PD & refusing to sell milk to tear-gassed protesters," began the post, which ended with "BLM," the hashtag for "black lives matter."

We have not found evidence to support this.

Looting started at the Target store on Lake Street May 27 before spreading to other areas in the city, the Star Tribune reported, with looters seen leaving with items such as large TVs, clothing and groceries. Police used tear gas after protesters threw items at them, CNN reported.

As we prepared this fact-check on May 29, details of the looting at the Target, across from a police station, remained sketchy. However, we found no evidence that the looting was prompted by employees at the store refusing to serve protesters.

Target’s corporate office did not respond to our requests for information. It had issued a statement on May 28 saying, "We are heartbroken by the death of George Floyd and the pain it is causing our community," and said that it had closed six stores in Minneapolis and St. Paul.

It was later reported that Target had closed 24 stores in the Twin Cities area, but reopened 18 of them on May 29. We found no reports in our Google and Nexis searches about looting being prompted by the store refusing to serve protesters.

Two photos shared in tandem on social media attempt to show the uneven response by police to American protests in "Minnesota May 2020!" The caption emphasizes that point, saying "same state, same month."

The first image in a May 27 Facebook post shows a group of white men holding firearms, with no police presence in sight, in protest of COVID-19 stay-at-home orders. The image is contrasted with a more intense picture of police aiming tear gas at unarmed people on the ground who were protesting Floyd’s death.

The photographs are real depictions of recent protests, but they weren’t both taken in May 2020 in Minnesota. We rated a post that shared them Mostly False.

The top image shows a group of mostly armed, white men protesting Gov. Gretchen Whitmer’s stay-at-home order. It happened on April 15 in front of the Michigan State Capitol building in Lansing. Police did not fire tear gas. The image was taken by AFP photographer Jeff Kowalsky.

The second photo is from May 26, a day after video surfaced of Chauvin pinning down Floyd by the throat with his knee. The image of police spraying tear gas at protesters was included in multiple CBS broadcasts the first day of the Minneapolis protests when they were largely non-violent.

Disputed video of woman in wheelchair

Video footage shows a melee outside of a Target in Minneapolis involving a white woman in a wheelchair and black protesters. In some edits of the videos the white woman appears to be a victim. In others, the black demonstrators claim she is attacking them.

What we know is that the incident started during demonstrations over the death of Floyd. As far as the videos of the fracas, there remain more questions than answers.

Video footage posted on Facebook shows us broad strokes of violence without immediately making clear what the truth is here. In a series of clips, we see the woman in the wheelchair being collared by a black woman amid screaming and someone repeatedly yelling, "no." A black woman hitting the white woman in the head. Someone spraying the white woman with what looks like a fire extinguisher. Someone off camera saying: "Jennifer, Jennifer, Jennifer, is that enough?" The white woman throwing something at the crowd gathered around her. That woman claiming that "the looters who were looting Target" attacked her while she was "peacefully protesting."

"I got punched in the head several times," she says. "They stole everything they could off of me." She adds that she used her wheelchair to block the door to Target, and that she had a knife, which sliced the arm of a woman behind her.

On May 27, the Gateway Pundit wrote that "savage animals looting in Minneapolis violently attack disabled lady in a wheelchair."

Other accounts on the incident say something different was happening.

"Racist woman in wheelchair pretending to be an ally claims she was stabbed by black men but was actually recorded stabbing black men," one Instagram post, with different edits of video, says. The posts say the woman antagonized the protesters and stabbed them with a knife.

We don’t know enough to tease out what’s really happening. But different edits of this same recording highlight how it’s being wielded to support rivaling perspectives.

This story was updated June 1 to clarify that the identity of the man in the Auto Zone post.