Viral image
stated on May 27, 2020 in a Facebook post:
Says an image of armed anti-lockdown protesters and an image of unarmed Minneapolis protesters being tear gassed were taken in the “same state, same month.”

Two photos shared in tandem on social media attempt to show the uneven response by police to American protests in May 2020.

The first image in a May 27 Facebook post shows a group of white men holding firearms, with no police presence in sight, in protest of COVID-19 stay-at-home orders. The image is contrasted with a more intense picture of police aiming tear gas at unarmed people on the ground who were protesting the death of George Floyd. 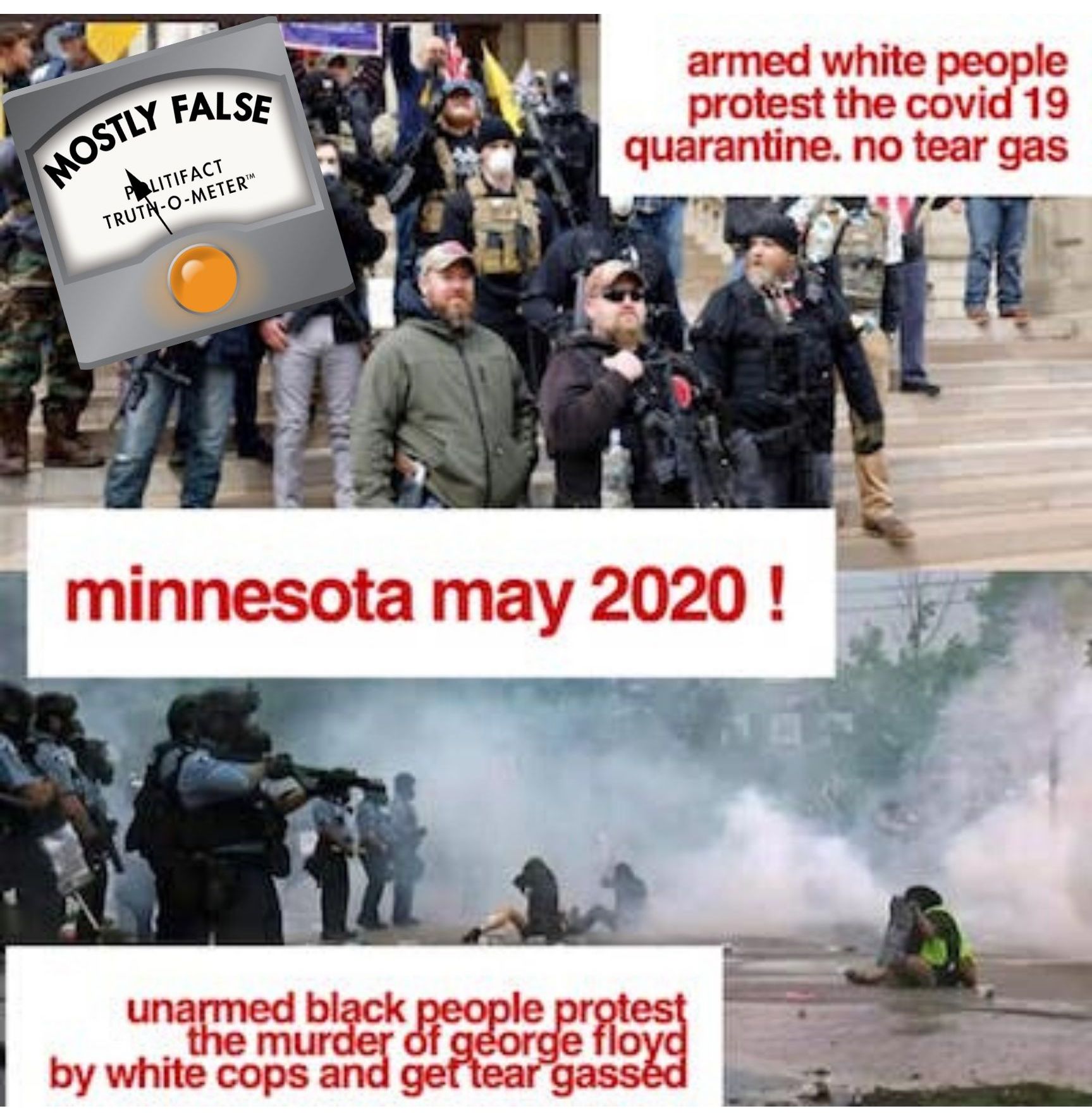 The photographs are real depictions of recent protests, but they weren’t both taken in May 2020 in Minnesota.

The images were flagged as part of Facebook’s efforts to combat false news and misinformation on its News Feed. (Read more about our partnership with Facebook.)

The top image shows a group of mostly armed, white men protesting Gov. Gretchen Whitmer’s stay-at-home order. It happened on April 15 in front of the Michigan State Capitol building in Lansing. Police did not fire tear gas. The image was taken by AFP photographer Jeff Kowalsky.

At the time, protesters in several states were pushing for government officials to reopen the economy, saying the restrictions on business infringed upon their rights.

There are photos that show a few armed anti-lockdown protestors outside of the Minnesota governor's mansion at the end of April.

The second photo is from May 26, a day after video surfaced of a white Minneapolis police officer pinning down a black man by the throat with his knee. The man, George Floyd, pleaded repeatedly that he couldn’t breathe and later died at the hospital. The officer, Derek Chauvin, was fired along with three others from the department. Chauvin was arrested on May 29 on charges of third-degree murder and manslaughter.

The image of police spraying tear gas at protesters was included in multiple CBS broadcasts the first day of the Minneapolis protests when they were largely non-violent.

One is, but one is not. The image of armed protesters is from Michigan in April.

The statement contains an element of truth about disparate responses but ignores critical facts that would give a different impression. We rate the claim Mostly False.