Tying it all together were persistent and inaccurate claims about alleged voter fraud, affidavits, and corruption.

But many of the statements made by Giuliani and Sidney Powell, a former federal prosecutor and Trump campaign attorney, were demonstrably false.

Here’s a fact-checked recap of the Trump campaign’s claims.

Giuliani: "Joe Biden told us a few days before the election, that he had the best voter fraud team in the world."

False. Giuliani is referencing a video excerpt that takes Biden’s words out of context and misrepresents the substance of what he said.

In late October, Biden spoke on the pro-Democratic program, "Pod Save America." He did use the words "voter fraud organization," but he was describing a project to help people learn where and how to vote, and provide legal resources if they faced challenges to voting, not an effort to cast false ballots. You can read a full transcript here.

Giuliani, on a lawsuit filed in Michigan: "Trump v. Benson is a case that we dismissed today because that case was attempting to get the Wayne County Board of Supervisors to decertify. Well, they did. They decertified."

They didn’t decertify. In Wayne County, Mich., two Republican members of the county canvassing board initially voted against certifying the results, but later changed their votes and certified the results 4-0 on Nov. 17.

The next day, the same two Republicans said they wanted to rescind their votes, which the Michigan secretary of state’s office said isn’t possible. The statewide board still has to certify the statewide total. The board meets on Nov. 23.

Giuliani, asserting that election fraud goes back years: "They held the vote back in Palm Beach County and Broward County, in order to see if they could steal that election for the Senate and governor, and then got caught manufacturing ballots. Democrats have been doing this for years on a small scale."

This is wrong on many fronts.

In November 2018, then-Gov. Rick Scott alleged fraud in the ballot counting in two left-leaning counties, Palm Beach and Broward. Trump echoed Scott’s remarks about Broward. Ultimately, Scott won his race for U.S. Senate in a statewide recount, as did Republican Ron DeSantis in the governor’s race.

The Florida Department of Law Enforcement, a state agency in a Republican administration, launched an investigation about allegations of vote-by-mail fraud by Democrats. More than a year later in May 2020, FDLE closed the investigation after finding no evidence of fraudulent intent.

Giuliani: "The minute that you separate the outer envelope from the ballot, you can no longer trace it, which is why the count, whatever the count in Georgia today is, it's totally ridiculous. They're counting the same fraudulent ballots one more time."

This is a mischaracterization of how mail-in voting works — and it overlooks a core element of the U.S. system of voting: the secret ballot. We rated a related claim from Trump Pants on Fire.

First, there is no evidence of widespread fraudulent ballots in Georgia. The mail-in vote happened as expected.

Second, each mail-in ballot has a sleeve or envelope that the voter must sign. Election workers match the signature to voter records. If the signature is verified and complies with the law, the ballot is separated from the envelope to protect the privacy of the vote.

"There is no way to go back and review signatures after they’ve been separated from the ballots, and there’d be no reason to do so," David Becker, head of the private Center for Election Innovation and Research, told PolitiFact.

Giuliani: "This has been a massive attack on the integrity of the voting system in the greatest democracy on earth."

There is zero evidence for "massive" election fraud. A committee made up of U.S. Cybersecurity and Infrastructure Security Agency officials and its election partners said this election was "the most secure in American history."

There is no evidence that any voting system deleted or lost votes, changed votes, or was in any way compromised, they said. Multiple security measures like pre-election testing, state certification of voting equipment, and the U.S. Election Assistance Commission’s certification of voting equipment were used in the 2020 election, the officials said. 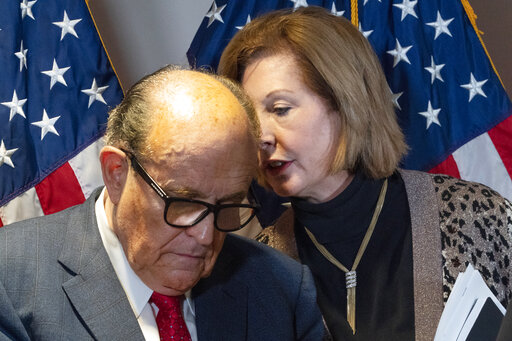 Giuliani: In Michigan, votes "were being counted in Germany, by a Venezuelan company."

This is wrong. Michigan election workers counted the votes. "The 30,000 election workers we recruited through our Democracy MVP program and the 1,600+ local clerks working tirelessly around the state with them until the counting was completed can attest that votes were counted here in Michigan," Tracy Wimmer, a spokesperson for Michigan Secretary of State Jocelyn Benson, told PolitiFact.

Powell at the press conference also claimed two companies that supply election technology, Dominion Voting Systems and Smartmatic, were created in Venezuela under the direction of the country’s former president, Hugo Chavez, who died in 2013.

Giuliani: Affiants swear "that at 4:30 in the morning, a truck pulled up to the Detroit center where they were counting ballots. The people thought it was food, so they all ran to the truck. Wasn’t food. It was thousands and thousands of ballots."

This is not true. Giuliani’s assertion relies on allegations in a lawsuit that a judge determined were unfounded.

For example, Mellissa Carone, an IT contractor for Dominion Voting Systems, stated in an affidavit that people thought vans were delivering food but, "I never saw any food coming out of these vans, coincidentally it was announced on the news that Michigan had discovered over 100,000 ballots."

Wayne County Circuit Judge Timothy Kenny found the allegations lacking. He wrote that the description of events "does not square with any of the other affidavits" and that "the allegations are simply not credible."

Kenny rejected the plaintiff’s requests, including for an independent audit. On Nov. 16, the Michigan Court of Appeals denied a request to appeal Kenny’s ruling.

Pants on Fire! The numbers come from an affidavit filed by lawyers working for Trump, but the jurisdictions cited are in Minnesota, not Michigan. Furthermore, the Minnesota data cited in the affidavit do not square with actual data from the Minnesota Secretary of State’s office. The official data shows no over-voting.

A Trump campaign lawyer acknowledged a "simple mistake" and said the document would be "corrected."

Powell: "Now the software itself was created with so many variables and so many back doors that can be hooked up to the internet or a thumb drive stuck in it or whatever, but one of its most characteristic features is its ability to flip votes."

This is Pants on Fire, and a repeat of previous claims Powell has made that voting machines run by Dominion, Smartmatic and other companies were created to change the results of the election.

Dominion and Smartmatic are two separate companies that make electronic voting systems — neither was created for "changing the results of elections."

Dominion was founded in 2003 and has headquarters in Denver and Toronto. Its technology is used to administer elections in 28 states, including some states that went for Trump.

Smartmatic, which was founded in Boca Raton, Fla., in 2000 and is now based in London. Its technology also wasn’t used in any of the battleground states won by Biden where Trump allies are disputing the results.

Since Election Day, Dominion has been the subject of disinformation that seeks to undermine confidence in the integrity of the vote. We previously rated as Pants on Fire a claim that the company flipped votes from Trump to Biden in states where the president has brought legal challenges.

Powell: "There are ties of the Dominion leadership to the Clinton Foundation and to other known politicians in this country."

Given a flood of misinformation about its company and the election in general, Dominion on its website set up a page dispelling rumors, including this one: "Dominion has no company ownership relationships with the Pelosi family, Feinstein family, Clinton Global Initiative, Smartmatic, Scytl, or any ties to Venezuela. Dominion works with all U.S. political parties; our customer base and our government outreach practices reflect this nonpartisan approach."

We looked into one blog post that claimed a lobbyist for Dominion is a "longtime aide" to House Speaker Nancy Pelosi. Lobbyist Nadeam Elshami worked for Pelosi, but the blog post failed to mention that two other lobbyists listed on the company’s disclosures used to work for Republicans.

PolitiFact, "Smartmatic and Dominion systems ... were built to do this very thing, for changing the results of elections.", Nov. 19, 2020

PolitiFact, No, Michigan has not refused to certify the election results, Nov. 18, 2020

PolitiFact, Sorting out fact from fiction in the Florida recounts, Nov. 14, 2018

PolitiFact, No, US military did not raid election software company tied to Dominion, Nov. 17, 2020