Abraham Lincoln in 1864 (Library of Congress)

• Lincoln was faced with a Supreme Court vacancy 27 days before Election Day in 1864, when his party controlled the Senate. He decided to wait until after winning the election to pursue the nomination.

• However, historians who have studied the relationship between Lincoln and his nominee, Salmon P. Chase, said that Lincoln’s decision may have stemmed from political or logistical reasons rather than high-minded reasons.

Democratic vice presidential candidate Kamala Harris invoked Abraham Lincoln to say why a nominee to succeed the late Justice Ruth Bader Ginsburg should not be confirmed until the next president is sworn in.

Harris brought a "history lesson" to the vice presidential debate on Oct. 7. Harris said that Lincoln was up for reelection when the chief justice, Roger Taney, died on Oct. 12, 1864, which was just 27 days before the election.

"Honest Abe said it's not the right thing to do. The American people deserve to make the decision about who will be the next president of the United States, and then that person can select who will serve for a lifetime on the highest court of our land," Harris said. "And so (Democratic presidential nominee Joe Biden) and I are very clear: The American people are voting right now, and it should be their decision about who will serve on this most important body for a lifetime."

Harris was right about the proximity of Taney’s death to the election; it was 27 days ahead of the election, the shortest in history. Ginsburg, by contrast, died 46 days before the election. Lincoln did not seek confirmation of his nominee, Salmon P. Chase, until after the election.

However, it’s hard to confirm that Lincoln’s motivations in waiting until after the election were as high-minded as Harris said.

We couldn’t find any evidence for Lincoln saying what Harris described. Michael Burlingame, the distinguished chair in Lincoln studies at the University of Illinois-Springfield, told PolitiFact, "I've never seen anything like that quote in all my 36 years of Lincoln research." 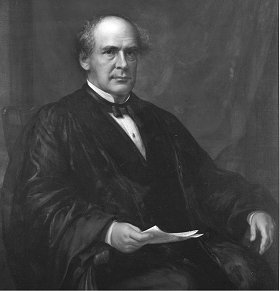 Chase had until recently been serving as Lincoln’s Treasury secretary, and was at times considered a political rival to Lincoln, but one he respected. Chase was also respected among anti-slavery Republicans in the Senate, and was ultimately confirmed him by a unanimous vote.

Lincoln "knew Chase to be consistently loyal to his own principles, especially in his attitude toward slavery and the rights of the Black man," wrote Susan J. Court in a 1981 journal article.

This perspective marked a sharp contrast with the chief justice he was replacing. Taney had been the author of the Dred Scott decision, which ruled that enslaved people could not be treated as citizens with full rights.

But while Lincoln did delay the nomination until Dec. 6, which was weeks after the election, not all historians consider his motivations for doing so to be clear.

The Biden campaign pointed PolitiFact to a tweet during the debate by historian Michael Beschloss that said, "Harris is correct that when Roger Taney died in October 1864, Abraham Lincoln deferred a Supreme Court appointment until after election so that next President, with a new mandate, could do it."

"I don’t think there is a definitive answer" for why Lincoln waited, Stephen E. Maizlish, a historian at the University of Texas-Arlington and biographer of Chase, told PolitiFact. "Abraham Lincoln was a master politician and kept his cards close to the vest until he was ready for a decision."

"It is fair to say Lincoln waited until he felt he had the authority, but I think there will always be questions," Maizlish added.

Burlingame suggested Lincoln’s move was a combination of risk-aversion and logistical concerns.

"He evidently did not want to antagonize conservatives during the campaign," Burlingame said. "Congress was out of session and not scheduled to reconvene until early December. Lincoln doubtless thought that it was inadvisable to summon a special session in the midst of a presidential campaign when his chances of reelection looked very good. Besides, members of Congress were busy stumping for their own candidacies."

Email interview with Stephen E. Maizlish, historian at the University of Texas-Arlington and biographer of Salmon P. Chase, Oct. 7, 2020

Email interview with Michael Burlingame, distinguished chair in Lincoln studies at the University of Illinois-Springfield, Oct. 8, 2020