President Donald Trump says that Americans are tired of COVID-19, the contagious disease that has killed more than 220,000 Americans. So he continues to hold in-person campaign rallies with large crowds and scolds those who urge safety precautions he doesn’t like.

Lately, Trump has been attacking a member of his own administration: Dr. Anthony Fauci, the director of the National Institute of Allergy and Infectious Diseases.

"People are tired of hearing Fauci and all these idiots. These people that have gotten it wrong. Fauci’s a nice guy, he’s been here for 500 years," Trump said on a call with campaign staff Oct. 19. Trump labeled Fauci a "disaster" and said "every time he goes on television, there’s always a bomb, but there’s a bigger bomb if you fire him."

Trump’s skepticism of Fauci has been going on for months, but it’s intensified in the weeks before Election Day as Trump and Biden have made their final pitches to voters.

Despite Trump’s displeasure with Fauci, Fauci is a popular figure. Trump’s campaign even touts Fauci’s statements throughout the pandemic as proof that Trump acted effectively to combat the crisis. The campaign featured a few seconds of a Fauci interview in an ad, although out of context.

Trump’s recent claims about Fauci leave out key information and misrepresent the facts.

"He's a Democrat, everybody knows that."

Fauci is not affiliated or registered with any political party, nor does he endorse any political party or candidate, the National Institute of Allergy and Infectious Diseases told PolitiFact. The D.C. Board of Elections told us that according to its records, Fauci has been registered in D.C. since 1984 with no party affiliation.

Fauci has led the agency since 1984, serving under the administrations of four Republicans (Trump included) and two Democrats.

"In my nearly five decades of public service, I have never publicly endorsed any political candidate," Fauci told CNN earlier this month after a Trump ad took one of his statements out of context. 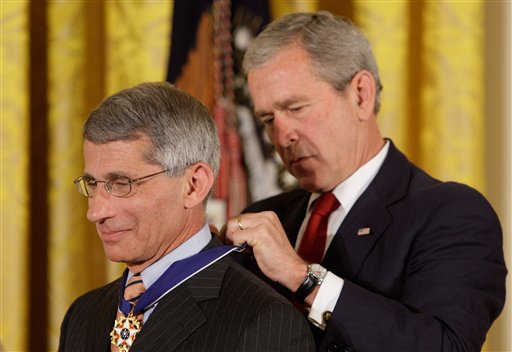 President George W. Bush places the Presidential Medal of Freedom on Dr. Anthony S. Fauci, director of the National Institute of Allergy and Infectious Diseases, June 19, 2008. (AP)
"Dr. Fauci what he said is, ‘No, no. Don’t close it to China’."

This needs context. After a Jan. 24 briefing to senators about the new coronavirus, Fauci told S&P Global that restricting travel was "not a good idea at this time" and that it "would create a lot of disruption, economically and otherwise, and it wouldn't necessarily have a positive effect."

But days later, on Jan. 31, Fauci participated in a press conference where Health and Human Services Secretary Alex Azar announced restrictions on travel from China. Fauci supported the restrictions.

At the time, Fauci said there were a lot of unknowns about the new virus, but some countries outside of China had travel-related cases and "secondary cases from them." That was also happening in the United States, and the World Health Organization had issued (on Jan. 30) a Public Health Emergency of International Concern declaration, Fauci said.

"We still have a low risk to the American public, but we want to keep it at a low risk. And because there are so many unknowns here, we’re going to take the action that the secretary will describe, in a temporary way, to make sure we mitigate, as best as we possibly can, this risk," Fauci said.

Fauci continued his support of the restriction during a Feb. 28 interview on Fox Business’ "Lou Dobbs Tonight." Fauci said: "We've done really quite well thus far, and I think one of the reasons why is that what we did early on was that travel restriction from China, preventing a lot of people who are infected, particularly from Wuhan, from coming into the country."

This, too, needs context. Early on, Fauci said masks would not prevent all virus particles from going through, and that use of masks was more important for people already infected. Some of his comments came when the country faced a severe shortage of the N-95 masks used by health care workers. Given the shortage of masks, the general public ranked last behind doctors and nurses, and people who are infected, Fauci said.

As public health experts learned more about the new coronavirus, the Centers for Disease Control and Prevention changed its guidance on masks. On April 3, it recommended that nearly everyone wear a facial covering in public and in areas where social distancing isn’t possible.

This is not accurate. In the early months, Fauci told reporters how the situation stood at the moment, and with relatively few cases in the United States said, "I don’t think people should be frightened," because the public risk was low at the time. But he warned that the situation could change and should be monitored closely.

On Jan. 20, Fauci told CNN, "It really is an evolving situation, and we have to be prepared for the worst. I mean, I don't think there is cause for panic on anyone's part but we certainly need to be following it and watching this very carefully."

He told Fox Business in an interview the next day that it was "completely impossible to predict what the scope is going to be. … This is something that will likely spread more before we actually get it under control."

With just 15 cases reported as of Feb. 22, Fauci told CNN that at that particular moment, "The risk is very low. But, and I have to underline ‘but,’ this could change and it could change rapidly."

He added: "If this evolves into a pandemic, there's no way we in the United States are going to escape having more infections in this country."

Biden "actually said the other day, he’ll follow science. So that means if Fauci says, ‘Close it up,’ he’s going to close up the country. "

Trump’s comment is misleading. Biden has said that as president he would follow the science and guidance of public health experts. But Fauci has said that a total country lockdown is not the only way to slow the spread of the virus.

"There seems to be a misperception that either you shut down completely and damage a lot of things, mental health, the economy, all kinds of things, or let it rip and do whatever you want," Fauci told Politico in August. "There's a stepwise fashion that you can open up the economy successfully, you don’t have to lock down again, but everybody's got to be on board for doing these five or six fundamental public health measures."

Those measures include wearing a mask, physically distancing six feet or more, avoiding crowds and bars, hand hygiene, and opting for outdoor instead of indoor events, he said.

In a 60 Minutes interview aired Oct. 19, Fauci was asked how bad things have to get for him to  push for a national lockdown. He again favored public health measures instead of a complete lockdown.

"They'd have to get really, really bad. First of all, the country is fatigued with restrictions. So we want to use public health measures not to get in the way of opening the economy, but to being a safe gateway to opening the economy," Fauci said. "So instead of having an opposition, open up the economy, get jobs back, or shut down. No. Put ‘shut down’ away and say, ‘We're gonna use public health measures to help us safely get to where we want to go’."

"If I listened totally to the scientists we would right now have a country that would be in a massive depression. Instead of, we're like a rocket ship, take a look at the numbers."

This is exaggerated. Experts like Fauci support public health measures that don’t require shutting down the country entirely. At this point in the pandemic, it is difficult to definitively gauge the full economic impact of cities’ lockdowns and other measures implemented to restrict the spread of the virus.

In April, the U.S. economy lost more than 20 million non-farm jobs. Most of the people affected worked in restaurants, retail and other hospitality jobs directly impacted by local orders to stay home and limit outings to essential activities. The 20 million decrease was 10 times larger than the previous record for jobs lost in one month, which came in September 1945, when post-World War II demobilization was kicking in.

The September unemployment rate was 7.9%.

Some analyses cast blame for the jobs lost on the federal administration’s response to the pandemic. But experts have told PolitiFact that the pandemic likely would have wiped out job gains under Trump regardless of the response.

A California radio station host asked Fauci about Trump’s criticism and if he ever thought, "you know, I’m out of here, this is enough, I don't need this."

"Well, you know, it depends if you take it personally. I focus totally on the health and the welfare of the people of this country. That's what I've devoted 50 years of my career towards, 36 of which were as the director of this institute. That’s the only thing I really care about," Fauci said on KNX 1070 on Oct. 19.

"That other stuff, you know, it’s like in ‘The Godfather,’ nothing personal, strictly business, as far as I’m concerned. I just want to do my job and take care of the people of this country. That’s all I want to do."

PolitiFact, In Context: As Trump criticizes, a look back at Fauci’s early coronavirus statements, July 14, 2020

Rand.org, Is the Unemployment Rate Now Higher Than It Was in the Great Depression?, May 7, 2020

Wayback Machine archive of DonaldJTrump.com, Dr. Dauci has repeatedly said the Trump administration did everything possible to save lives, Oct. 11, 2020