A makeshift memorial of flowers and a photo of Heather Heyer, in Charlottesville, Va., Aug. 13, 2017. Heyer died when a car rammed into a group of people who were protesting white supremacists who had gathered in the city for a rally. (AP/Steve Helber)

Democratic presidential nominee Joe Biden evokes President Donald Trump's response to violence in Charlottesville, Va., in 2017 as the catalyst for his decision to run for president.

After clashes in Charlottesville between white supremacists and counter-protesters, Trump "assigned a moral equivalence between those spreading hate and those with the courage to stand against it. And in that moment, I knew the threat to this nation was unlike any I had ever seen in my lifetime," Biden said in April 2019.

Biden has made similar statements throughout his campaign. But a new Trump campaign ad refutes Biden’s portrayal of Trump as a racist and as someone who doesn’t care about uniting the country.

Unlike other Trump campaign ads that feature a narrator, patriotic images or chaos, this Facebook ad cuts back and forth between video of Biden speaking and that of Trump speaking. It highlights statements Biden made about Trump during an Aug. 31 interview with WPXI, NBC’s affiliate in Pittsburgh. The ad juxtaposes Biden’s characterizations of Trump’s behavior with clips of Trump denouncing racist groups, including neo-Nazis and the Ku Klux Klan.

RELATED: The long history of racism in the US presidency

This Ad Watch story won’t rule on the overall message of the Trump ad; we’ll focus on the Charlottesville clips and add important context that the ad overlooks about what Trump said and when he said it.

What Trump said on Charlottesville

The ad opens with both candidates talking about the events that unfolded in August 2017 in Charlottesville.

Biden: "He didn’t even condemn the people that came out of the fields in Charlottesville, their veins bulging, carrying Nazi flags."

Trump: "I’m not talking about the neo-Nazis and the white nationalists — because they should be condemned totally."

Without knowing the sequence of events, you might think Biden was completely wrong. But in his initial public statements regarding the Charlottesville events, Trump did not mention or condemn neo-Nazis or white nationalists.

Here’s what happened at the time:

On Aug. 11, 2017, white nationalists carrying tiki torches, giving the Nazi salute and chanting Nazi slogans marched on the University of Virgina campus. They made their way to a statue of Thomas Jefferson where a group of counterprotesters gathered and a brawl ensued, leading to at least one person being led away in handcuffs by the police, according to the New York Times.

On Aug. 12, fights erupted at the "Unite the Right" rally between counter-protesters and those white nationalists demonstrating against the city’s plan to remove Confederate Gen. Robert E. Lee’s statue. A 20-year-old white man from Ohio, James Alex Fields, Jr., drove his car directly into a crowd of people who were were chanting and carrying signs promoting equality and protesting racial discrimination. Fields killed a 32-year-old woman in the crowd, Heather Heyer, and injured dozens more. (Fields in 2019 was sentenced to life in prison for the attack.) 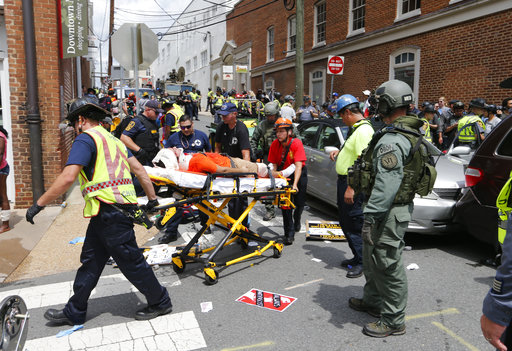 Rescue personnel help people injured after a man drove a car into them in Charlottesville, Va. Those injured were counter-protesting a rally held by white nationalists, Aug. 12, 2017. (AP/Steve Helber)

Trump’s first statements on Aug. 12 were a broad condemnation of hate, bigotry and violence "on many sides." Trump tweeted: "We ALL must be united & condemn all that hate stands for. There is no place for this kind of violence in America. Lets come together as one!" In another tweet, he mentioned meetings at his golf club in Bedminster, N.J. and ended the tweet with "but Charlottesville sad!"

Trump also spoke about Charlottesville that day before signing a bill that provided additional funding for veterans seeking health care at private medical facilities: "But we're closely following the terrible events unfolding in Charlottesville, Va.," he said. "We condemn in the strongest possible terms this egregious display of hatred, bigotry and violence on many sides, on many sides."

Republicans and Democrats promptly criticized Trump for not speaking more forcefully against the white nationalists and said Trump was creating a moral equivalence between the groups involved in the violent clashes.

After backlash over Trump’s initial comments, the White House on Aug. 13 issued a statement that said "of course" Trump condemned white supremacists, the KKK, neo-Nazis and all extremist groups. The White House attributed the statement to an unnamed official, not Trump.

Trump’s Aug. 14 statement against racism mentioned neo-Nazis. "Racism is evil. And those who cause violence in its name are criminals and thugs, including the KKK, neo-Nazis, white supremacists, and other hate groups that are repugnant to everything we hold dear as Americans," Trump said from the Diplomatic Room in the White House.

Trump’s Aug. 15 statement condemned neo-Nazis, and mentioned "very fine people on both sides." The Trump statement flagged in the campaign ad came Aug. 15 during a press conference. That day, Trump said he previously didn’t want to make a direct statement about neo-Nazis before knowing the facts. But it had been widely reported that neo-Nazis attended the Aug. 11 and Aug. 12 demonstrations.

Relevant portions of that Aug. 15 press conference are below and here’s a link to the full transcript:

Reporter: "Why did you wait so long to blast neo-Nazis?"

"So I don’t want to go quickly and just make a statement for the sake of making a political statement. I want to know the facts."

Reporter: "Do you think that what you call the alt-left is the same as neo-Nazis?"

Reporter: "The neo-Nazis started this. They showed up in Charlottesville to protest —"

After an exchange with a reporter about George Washington, Thomas Jefferson and the removal of statues, Trump said (the line in bold is what’s included in the Trump ad):

We asked both campaigns for comment about the ad.

A Trump campaign spokesperson said the video is a "straightforward rebuttal of Biden’s claims showing the President has in fact talked about these things Biden claimed he hasn’t."

Biden campaign spokesperson Rosemary Boeglin characterized the ad as "patching together anomalous video clips in an attempt to rewrite history or erase the president’s failures." She said of the ad’s Charlottesville portion that Trump "is the last person that comes to mind when you hear the words 'peace and unity.'"

Richmond Times-Dispatch, How the disaster in Charlottesville unfolded, as told by the people who were there, Aug. 18, 2017