Counting the electoral votes on Jan. 6: What you need to know

• The electoral college vote tally is already known — 306 for Joe Biden and 232 for Donald Trump — but the electoral votes will be officially counted in a joint session of Congress on Jan. 6.

• Usually, this is a day for pomp and ceremony and is completed within an hour. But numerous Republican senators and House members have promised to raise objections to certain states’ electoral vote slates, and if that happens, the requirements for debate and votes on those objections could drag the process into the night,

• Regardless of what the objectors do, they do not have a realistic chance of overturning the election result. A majority of both the House and Senate, including both Democrats and Republicans, are expected to vote down any objections, which would end the process.

The 2020 presidential election cycle is almost over. After the voting, the counting, the legal challenges, and the casting of the electoral college votes in December, a joint session of Congress will formally count the electoral votes for president at 1 p.m. on Jan. 6. The final margin — 306 for Joe Biden and 232 for Donald Trump — is already known.

Normally, it would be a day of pomp and ceremony. But this year, continuing efforts by Trump and his supporters to overturn the election result will make the process of electoral-vote counting longer and more complicated than usual — even though experts are unanimous that at the end of the day, Biden’s victory will be affirmed.

Here’s what to expect.

When do the electoral results truly become official?

The president of the Senate — a position held by the sitting vice president, currently Mike Pence — presides over a joint session of both chambers, held in the House chamber. If the vice president is absent for any reason, the Senate president pro tempore, Chuck Grassley, R-Iowa, would preside, not the House speaker.

Procedure dictates that the Senate president unseals the electoral certificates in alphabetical order by state. He hands them to four "tellers" — two from the House, two from the Senate — who read the certificates from the states and the District of Columbia and announce the electoral votes per state. The Senate president announces the final result. If there are no interruptions, this takes 20 to 25 minutes.

When the process is complete, the vice president declares a winner. At this point, the election is officially decided and simply awaits the inauguration.

What could be done to upset this process?

The statute governing electoral vote counting in Congress prohibits debate and most motions, but supporters of Trump have one chance to object.

"During the reading of the certificates, an objection may be made in writing, but must be signed by at least one member of each house," said Steven Smith, a political scientist at Washington University in St. Louis.

The statute that governs the process says that electoral votes must be "regularly given" and "lawfully certified" to be counted. The objections would likely seek to attack the meaning of these terms, Smith said.

At that point, the joint session is suspended so that the House and Senate can separately debate and vote on it. Each chamber decides on its own by a simple majority, said Gregory Koger, a University of Miami political scientist.

The statute sets a debate limit of two hours on each chamber for considering an objection, Smith said. "Done repeatedly over several states, this process can consume a great deal of time," he said.

On Jan. 3, the House and Senate both passed a set of rules governing the electoral college count that was identical to previous electoral counts, further ruling out any procedures that are out of the ordinary.

Votes on objections are rare. The last one came in 2005, when two Democrats — Rep. Stephanie Tubbs Jones of Ohio and Sen. Barbara Boxer of California — objected to Ohio’s electoral votes for George W. Bush, saying there had been voting irregularities. Both chambers held debates and rejected the objection. 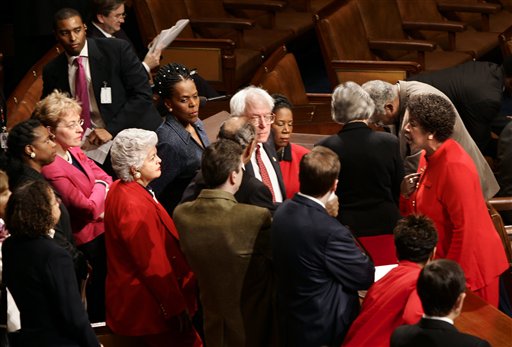 Rep. Stephanie Tubbs Jones, D-Ohio, right, confers with fellow Democrats after submitting an objection to the certification of Ohio's electoral votes during a joint session of Congress on Jan. 6, 2005. (AP)

What could happen this year?

Possibly up to 140 House Republicans could object to electoral slates from key states, and at least 12 senators have pledged to do so as well. They are GOP Sens. Marsha Blackburn and Bill Hagerty of Tennessee, Mike Braun of Indiana, Ted Cruz of Texas, Steve Daines of Montana, Josh Hawley of Missouri, Ron Johnson of Wisconsin, John Kennedy of Louisiana, James Lankford of Oklahoma, Cynthia Lummis of Wyoming, Roger Marshall of Kansas, and Tommy Tuberville of Alabama.

If these pledges hold, then we can expect objections on at least one state, and probably several.

Cruz’s statement said the 2020 election "featured unprecedented allegations of voter fraud, violations and lax enforcement of election law, and other voting irregularities." Cruz asked for a 10-day audit to be completed to reassure those who questioned the election.

However, every state certified their election results, meaning that officials — a mix of Republicans and Democrats — were confident that there was no fraud or errors to come close to reversing the results. In addition, dozens of challenges by Trump’s legal team have been rejected by judges, with almost no victories in court.

Could any of this give Trump a second term?

There is basically zero chance the objections will change the outcome of the 2020 election. For starters, there’s nothing Pence (or any replacement as presiding officer) can do that would change electoral votes.

"While the Trump die-hards might think the vice president somehow has discretionary authority to declare the Trump-Pence ticket the actual winner of the election, such a notion has no basis in the Constitution or law," Donald R. Wolfensberger, a specialist in congressional procedure and director of the Congress Project at the Woodrow Wilson International Center for Scholars, wrote recently.

Rep. Louie Gohmert, R-Texas, filed a lawsuit to push Pence to take a more hands-on role in determining what should be counted, but it was thrown out of court.

This means that the decision will be left to the two chambers. Because both chambers must agree to an objection, it would fail if only one agrees to it. And if the objection fails, the challenged votes are counted.

"Objections are easily raised, but there is no realistic chance that House Democrats would approve of Republican-sponsored objections," Smith said. Koger agreed, saying, "There is zero chance a challenge will succeed if the voting falls along party lines."

All Senate Democrats are certain to vote against any objection, so Democrats would need to pick off only a couple of institutional-minded Republicans to side with them to make sure that the objection fails.

They already have more than that. At least 20 senators have gone on record saying they will certify Biden’s victory. They are Senate Majority Leader Mitch McConnell of Kentucky, plus Grassley and GOP Sens. Mike Lee of Utah, Rob Portman of Ohio, Roy Blunt of Missouri, Richard Burr of North Carolina, Shelley Moore Capito of West Virginia, Bill Cassidy of Louisiana, Susan Collins of Maine, John Cornyn of Texas, Tom Cotton of Arkansas, Deb Fischer of Nebraska, Lisa Murkowski of Alaska, Mitt Romney of Utah, Mike Rounds and John Thune of South Dakota, Ben Sasse of Nebraska, Richard Shelby of Alabama, Patrick Toomey of Pennsylvania, and Roger Wicker of Mississippi.

It’s unclear how many states’ electoral votes will face objections by a House member and senator, but objections could address several close battleground states, including Arizona, Georgia, Pennsylvania, and Wisconsin. If this happens, the end of the counting session could last into the night.

But once the count is eventually brought to a close, experts said they can’t imagine any other last-ditch scenarios being available to Trump and his supporters.

"As a practical matter, I don’t think there’s any realistic expectation that Biden’s inauguration is vulnerable to what will happen in Congress on Jan. 6," said Ned Foley, an Ohio State University law professor.

When is the inauguration?

The inauguration is set to take place at noon on Jan. 20. The outgoing president’s term expires, and the winning candidate is sworn in.

PolitiFact, "Casting and counting the electoral votes: What to expect," Dec. 10, 2020

National Archives, "The 2020 Presidential Election: Provisions of the Constitution and U.S. Code," Nov. 5, 2020

Congressional Research Service, "Counting Electoral Votes: An Overview of Procedures at the Joint Session, Including Objections by Members of Congress," Nov. 15, 2016

American Enterprise Institute, "After the People Vote: A Guide to the Electoral College," fourth edition, 2020

Cook Political Report, "Six Scenarios for Confusion in Counting the 2020 Ballots: Not Just Scary Campfire Stories Any More," May 25, 2020

Washington Post, "Here’s when Biden’s win becomes official — and how Trump has been trying to prevent that," Dec. 8, 2020

CNN, "All 50 states and DC have now certified their presidential election results," Dec. 9, 2020

Washington Post, "Where Republicans in Congress stand on Trump’s false claim of winning the election," Dec. 6, 2020

Email interview with Donald R. Wolfensberger, director of the Congress Project at the Woodrow Wilson International Center for Scholars, Jan. 4, 2021