A day of crisis at the US Capitol, fact-checked

After a day of rioting and tumult, after a woman was fatally shot inside the Capitol, after senators and representatives were driven from their chambers, Congress in the early hours of Jan. 7 affirmed that Joe Biden and Kamala Harris were the duly elected president and vice president of the United States.

Vice President Mike Pence and members of Congress returned to the House and Senate chambers Wednesday evening and condemned the violence that shook the nation’s capital. Many lamented the lack of truth and facts at the root of protests over the election results. Some senators who had planned to object to state election results — including GOP Sen. Kelly Loeffler, who lost her Jan. 5 Georgia runoff election — said they had changed their minds.

Still others sided with President Donald Trump’s meritless allegations of widespread irregularities in the election. Some Republican lawmakers objected to the slate of electors from Arizona and Pennsylvania — swing states that Biden won. But in the end, the longshot challenges did not stand.

"Today was a dark day in the history of the United States Capitol," Pence said as he resumed proceedings that evening.

Earlier in the day, Trump had addressed a large crowd of supporters gathered between the White House and the Washington Monument. As he falsely insisted he won the election, Trump repeated many baseless claims of election fraud and urged the crowd to march down Pennsylvania Avenue to Congress. At the Capitol, a mob pushed past barricades and overwhelmed Capitol Police officers, causing the House and Senate to break off debate and evacuate their chambers.

Cameras captured the seat of the legislative branch in a state of disarray. Inside, people waved Trump flags and a Confederate flag. A man hung from a balcony in the Senate chamber. One shirtless man held a megaphone and screamed "freedom" in a gallery. Another walked around the Capitol carrying a lectern, while another took over a chair in the Senate. One man made his way to House Speaker Nancy Pelosi’s office and wrote "we will not back down" on a folder on her desk. Lawmakers in the House were told to put on escape hoods as protection from smoke or tear gas as they moved around the Capitol.

Biden, speaking from Wilmington, Del., said that our democracy "is under unprecedented assault unlike anything we’ve seen in modern times."

"This is not dissent," Biden said. "It’s disorder. It’s chaos. It borders on sedition, and it must end now. I call on this mob to pull back and allow the work of democracy to go forward."

The shooting of the woman by a Capitol police officer is under investigation, said Metropolitan Police Department chief Robert J. Contee III. Three other deaths stemming from "medical emergencies" were reported Jan. 6 from the area around the Capitol grounds, Contee said.

Here’s a look at our fact-checks of the day’s session, and the chaos that interrupted it: 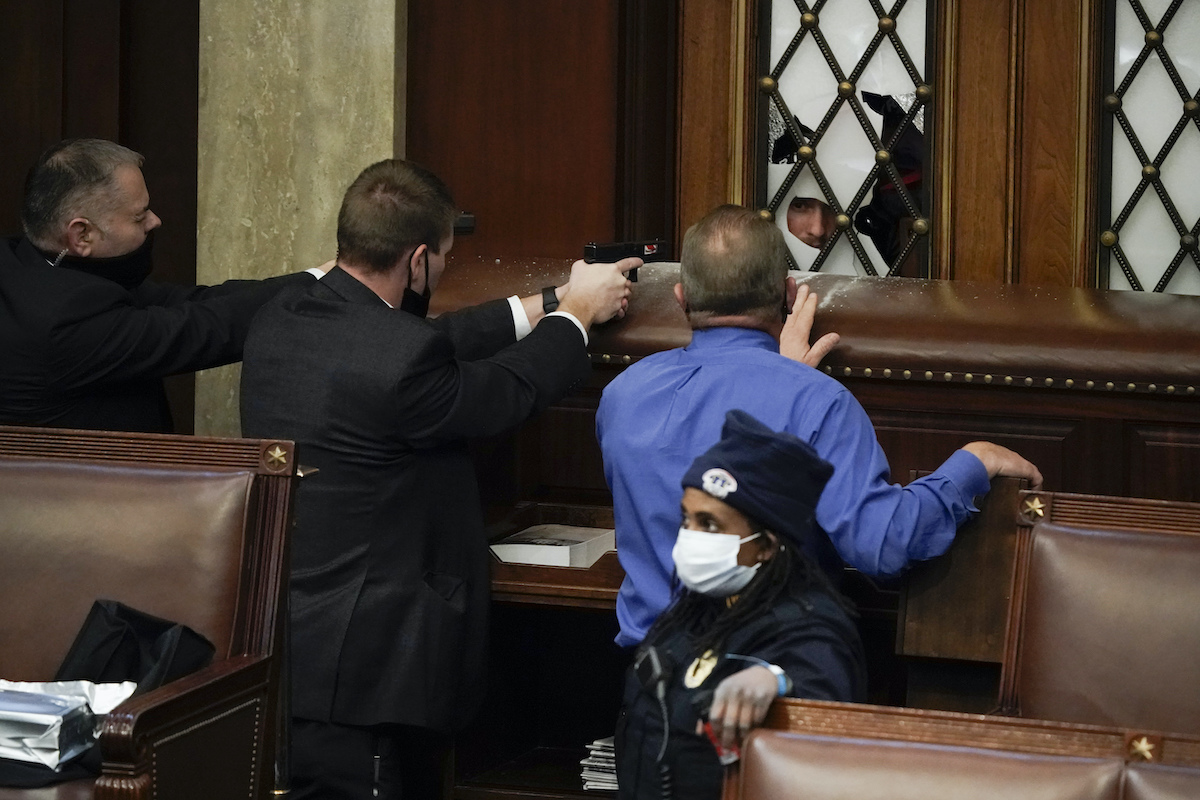 Police with guns drawn watch as protesters try to break into the House Chamber at the U.S. Capitol on Jan. 6, 2021. (AP)

Claims about the election results

"All Vice President Pence has to do is send it back to the state and recertify, and we become president." — President Donald Trump

This is False. While there are fringe theorists who say the vice president has the power to reject results from any state, legal scholars across the political spectrum say neither the Constitution nor any law gives the vice president that authority. Pence’s role is limited to opening the certified results from each state, passing the papers to House and Senate officials, and reading the final tally at the end. Senators and representatives can object to a given state’s results, but not the vice president.

Pants on Fire! Biden won the presidential election with 306 electoral votes, to Trump’s 232. All 50 states and the District of Columbia have certified their votes. None of the 62 lawsuits that Trump and his allies filed after Election Day has proved that fraud affected the election outcome. Federal agencies and state election officials have repeatedly said there is no evidence of widespread fraud.

"Every time in the last 30 years that Democrats have lost a presidential race, they have tried to challenge, just like this. After 2000, after 2004, after 2016. After 2004, a senator joined and forced the same debate, and believe it or not, Democrats like Harry Reid, Dick Durbin and Hillary Clinton praised and applauded the stunt." — Sen. Majority Leader Mitch McConnell, R-Ky.

This stretches the historical comparison. While Democrats have raised issues about particular states, the scale of the recent Republican upswell dwarfs what has taken place before.

In 2001, about a dozen members of the Congressional Black Caucus objected to the disputed Florida results, saying Black voters had been systematically disenfranchised. No Democratic senator joined the objection, and Vice President Al Gore, presiding over the joint session of Congress, ended the challenge.

In 2005, similar concerns for Black voters drew a challenge to the Ohio results, and this time, there was both a member of the House and a member of the Senate. The Senate rejected the move by a 74-1 vote.

In 2017, Biden as vice president shot down objections from House members, because no senator joined in. In contrast, this year, over a dozen Republican senators and over 130 House Republicans promised they would object to the results in at least three states.

"This election actually was not unusually close." — McConnell

This is correct. Biden’s victory wasn’t a landslide, but it was decisive, the numbers show.

Biden’s Electoral College victory was exactly the same as Trump’s in 2016: They both will have won states totaling 306 electoral votes. Biden’s electoral victory is larger than either victory by George W. Bush, who accumulated only 271 in 2000 and 286 in 2004. It is also slightly larger than the number won by Jimmy Carter in 1976, Richard Nixon in 1968, and John F. Kennedy in 1960.

An even stronger sign of Biden’s decisive victory is the popular vote, where he beat Trump by about 7 million votes. Biden amassed a wider popular vote margin than any candidate since 1996, except for Obama in 2008, who won by more than 9.5 million votes.

Mostly False. Cruz’s claim is based on a specific poll and the total percentage of survey respondents who "somewhat" or "strongly" agreed with the statement: "I am concerned that the election is rigged." That doesn’t necessarily mean they thought it was rigged.

Another question in the Reuters/Ipsos survey asked people more directly about their view of the election. The percentage of people who said the election was "the result of illegal voting or election rigging" was much lower than the numbers Cruz cited.

"The 2020 election was the most secure election conducted in modern history." — Rep. Zoe Lofgren, D-Calif.

"The Nov. 3 election was the most secure in American history," the statement says. "There is no evidence that any voting system deleted or lost votes, changed votes, or was in any way compromised."

"President Trump and his allies have suffered the defeat, a defeat in court after court across the country losing no fewer than 62 legal challenges and I might add many Republican-appointed judges, some appointed by President Trump rendered those decisions." — Sen. Chuck Schumer, D-N.Y.

This is correct. The Washington Post reviewed court documents and reported that 86 judges rejected at least one post-election lawsuit filed by Trump or his supporters. The judges served on the bench at many different levels, including the U.S. Supreme Court. The Post found that 38 judges were appointed by Republicans.

As PolitiFact reported, dozens of lawsuits failed because of errors, jurisdictional problems or lack of evidence of the widespread voter fraud they alleged.

Judge Stephanos Bibas, a Trump appointee to the U.S. Court of Appeals for the Third Circuit, said in dismissing one Pennsylvania challenge: "Free, fair elections are the lifeblood of our democracy. Charges of unfairness are serious. But calling an election unfair does not make it so. Charges require specific allegations and then proof. We have neither here."

Claims about the Capitol siege

"The people who stormed the Capitol building would seem to clearly qualify for prosecution under this provision," said Carlton Larson, a law professor at the University of California-Davis.

James Robenalt, a lawyer with an expertise in political crises, agreed. "What we are seeing is sedition," he said. "All those taking place and those in conspiracy are guilty and punishable."

Claim: The people who stormed the Capitol were antifa activists in disguise.

There’s no evidence that the Trump supporters who stormed the U.S. Capitol were actually or mostly "ANTIFA fascists in backwards MAGA hats," as Rep. Mo Brooks, R-Ala., tweeted.

Similar claims appeared on Facebook and in pro-Trump media. But video and photographs from the scene show people wearing and waving Trump-branded paraphernalia and flags. Reporters covering the events have described the crowd as Trump supporters. The crowd also included supporters of the QAnon conspiracy theory, according to reporters present.

This needs context. Gaetz was referencing part of Trump’s speech at a rally before Congress convened. Trump did use the word "peacefully" when he said to his supporters: "I know that everyone here will soon be marching over to the Capitol building to peacefully and patriotically make your voices heard."

But some of Trump’s remarks are open to interpretation, such as when he told his supporters, "You'll never take back our country with weakness. You have to show strength and you have to be strong. We have come to demand that Congress do the right thing."

While repeating the falsehood that states didn’t make an effort to verify the eligibility of votes cast, Trump said, "The Republicans have to get tougher. You're not going to have a Republican Party if you don't get tougher." Trump also used fiery rhetoric when talking about the media saying, "It's become the enemy of the people." He then pivoted and said, "Republicans are constantly fighting like a boxer with his hands tied behind his back."

RELATED: Is this a coup? Here’s some history and context to help you decide

RELATED: Ted Cruz’s misleading statement on people who believe the election was ‘rigged’

Springfield News-Leader, Congress has objected to Electoral College votes before. Here’s a look at past efforts, Jan. 5, 2020