Gabriel Sterling with the Georgia secretary of state's office speaks on Dec. 2, 2020, in Atlanta. (AP/Bazemore)

As President-elect Joe Biden’s inauguration approaches, President Donald Trump’s longshot bid to overturn the results of the election he lost has focused heavily on Georgia, a state Biden won narrowly. It was the first time a Democratic presidential candidate won Georgia since 1992.

Trump has spent weeks promoting false claims about the state’s election, despite no evidence of widespread fraud and repeated rejections to his legal team’s challenges in court. His efforts came to a head days before Georgia’s U.S. Senate runoff elections, when he pressured the Republican secretary of state to "find" enough votes to change the outcome in his favor.

The hour-long call Jan. 2 with Brad Raffensperger was first reported by the Washington Post. It showed the president increasingly at odds with reality as he recycled debunked claims about dead and ineligible voters, mystery ballots, rigged machines and other alleged fraud.

"At the end of the day, what (Trump) said was not factually correct," Raffensperger told NBC News after the press conference. "And I want to make sure that people understand the facts. That’s why I had Gabriel Sterling out there, one by one, knocking down all these rumors."

Sterling, a Republican who publicly encouraged Georgians to vote for Republican Sens. David Perdue and Kelly Loeffler in the state’s runoff elections, stood by a placard labeled "Claim vs. Fact" as he spoke. At one point, he described yelling at his computer when he heard audio of Trump repeating a debunked claim about "suitcases" of ballots on the call with Raffensperger.

"This is all easily, provably, false," Sterling said of Trump’s claims. "Yet the president persists, and by doing so undermines Georgians’ faith in the election system."

The roughly 5 million ballots cast in Georgia were counted three times, including once by hand. The hand recount uncovered more than 2,600 uncounted votes, most of which favored Trump, in Floyd County, Ga. But election officials said the mistake was due to human error, not voter fraud. In the end, the certified results showed Biden beating Trump by 11,779 votes in the state.

Georgia election workers verified signatures twice as they processed ballots, as PolitiFact has reported. In his press conference, Sterling said the secretary of state also brought in signature experts to examine 15,118 absentee ballot envelopes. They set aside two ballots with potential problems worth investigating, but both ballots were found to be legally cast and legitimate.

Unsubstantiated claims that signatures weren’t verified "were based on feelings," Sterling said.

Election workers took care to make sure ballots were processed properly, Sterling said, addressing false allegations that some ballots were scanned more than once.

When a scanning machine hits a problem, Sterling said, it stops. But some ballots go through the machine in the time that it is stopping. The normal procedure in those situations, Sterling said, is to "delete that last batch and rescan it so it scans properly." Any duplicate counts would have turned up in the hand recount.

"That audit showed that there was no problem with the machine scanning," Sterling said. "If somebody took a stack of ballots and scanned them multiple times, you would have a lot of votes with no corresponding ballots."

The Dominion voting machines used in Georgia did not "flip" votes for Trump to Biden, Sterling said. He called such claims, which PolitiFact rated Pants on Fire, "ridiculous."

The hand recount would have revealed tampering by the machines, but it didn’t. "By doing the hand tally, it shows none of that is true. Not a whit," Sterling said.

Dominion has set up a webpage to address misinformation about its machines. The company says its machines in Georgia underwent two different types of audits, which confirmed that there was "no hack or tamper" and "that the machines counted accurately."

Sterling also rejected claims that people were swapping out parts or pieces from the machines.

Election workers in Georgia did not shred or destroy ballots, Sterling said. "There is no shredding of ballots going on," he said. "That’s not real. That’s not happening."

Workers did shred the blank white secrecy envelopes meant to preserve voters’ privacy, Sterling said, but those lack identifying information and therefore "have no evidentiary value." After election workers in Cobb County, Ga., were wrongly accused of shredding ballots in November, for example, the county said only "non-relevant materials" had been discarded.

A water leak on Election Day was investigated and fixed

An Election Day water leak at Atlanta’s State Farm Arena, where election workers from Fulton County, Ga., were counting ballots, did not damage any ballots, the arena said in a statement.

The leak was reported around 6 a.m. Nov. 3 and fixed by arena officials in roughly two hours. It came from an overflowing urinal, Sterling said.

Frances Watson, the Georgia secretary of state’s chief investigator, wrote in an affidavit that the incident "did not affect the counting of votes by Fulton County later that evening."

The full footage undermines the debunked claim, repeated by Trump during his call with Raffensperger, that Georgia’s election workers pulled "suitcases" of fraudulent ballots from under a table and secretly counted them with no election observers present. Trump’s legal team had the entire tape but "intentionally misled" Americans, Sterling said.

The scene captured on tape shows election workers responsible for scanning ballots unpacking and tabulating ballots that had been separated from their envelopes but not yet counted. The ballots had been sealed moments earlier, before the workers were told to keep going.

"Around 10 p.m., with the room full of people, including official monitors and the media, video shows ballots that had already been opened but not counted placed in the boxes, sealed up, stored under the table," Watson wrote in her affidavit. "When the counting continued into later in the night, those boxes were opened so that the ballots inside could then be counted."

The video shows "normal absentee ballot carriers," not suitcases of fake ballots, Sterling said, and an independent monitor and investigator oversaw the counting into the night. Election observers were not asked to leave, Watson wrote, but some did so once election workers responsible for cutting open the envelopes finished their job and started packing up.

"Our investigation and review of the entire security footage revealed that there were no mystery ballots that were brought in from an unknown location and hidden under tables," Watson said.

The secretary of state’s office has investigated allegations of voters who died before Election Day, Sterling said. It has so far found only two people who could "potentially" fit that description.

The numbers that (Trump) had are not correct," Raffensperger told NBC News. "Instead of the 1,000 people or 5,000 he may have said of dead people voting, we had two." 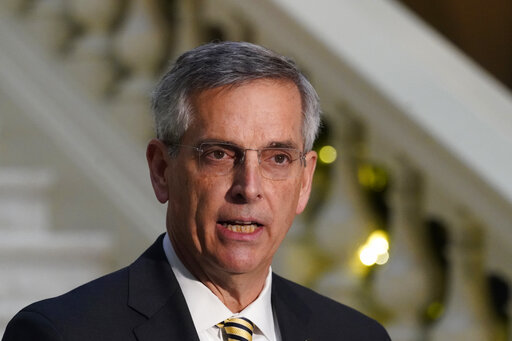 Georgia Secretary of State Brad Raffensperger speaks during a presser on Dec. 14, 2020, in Atlanta. (AP)

The state has information on voters to rebut false ineligibility claims

The state has produced data to disprove other unsubstantiated claims that say the election was tainted by ballots from people who were out of state, underage or otherwise ineligible to vote.

Sterling said the state was still investigating whether any voters cast ballots in multiple states, but he said the number would be "handfuls, not tens of thousands." Other Georgians, such as college students or military, legally mailed in ballots from out of state, PolitiFact reported.

Georgia has also pursued claims that felons voted illegally, Sterling said. But the secretary of state’s office has narrowed the list to 74 people, and Sterling said the number is likely lower.

There were far more registered voters than votes cast in Georgia, PolitiFact reported.

Only four Georgians requested absentee ballots before turning 18, Sterling said, and all four had birthdays before Election Day. "The dates are on the voter registration," Sterling said.

The Washington Post, "‘I just want to find 11,780 votes’: In extraordinary hour-long call, Trump pressures Georgia secretary of state to recalculate the vote in his favor," Jan. 3, 2021

The Washington Post, "Here’s the full transcript and audio of the call between Trump and Raffensperger," Jan. 3, 2021

Reuters, "Fact check: Videos do not show ballots being shredded in Georgia," Nov. 26, 2020

PolitiFact, "No evidence that 4,925 voters from out-of-state voted in Georgia in the presidential election," Jan. 4, 2021