He introduced it as what "may be the most important speech I’ve ever made." But the 46-minute video tirade President Donald Trump posted on social media was a recitation of the same baseless election fraud claims and conspiracy theories he has promoted for weeks.

The speech, delivered from a White House lectern, was posted to Trump’s Twitter and Facebook accounts Dec. 2. The release came one day after Attorney General William Barr joined experts, state and local election officials, and international observers in affirming that there is no evidence of the widespread voter fraud Trump has alleged.

The truth is that President-elect Joe Biden won the election, having received 306 electoral votes compared with 232 for Trump, and 7 million more votes. Key battleground states have already certified Biden as the winner, and Trump’s legal team has lost lawsuit after lawsuit in an effort to change that result. But Trump still refuses to concede defeat.

"This election is about great voter fraud, fraud that has never been seen like this before," Trump said. 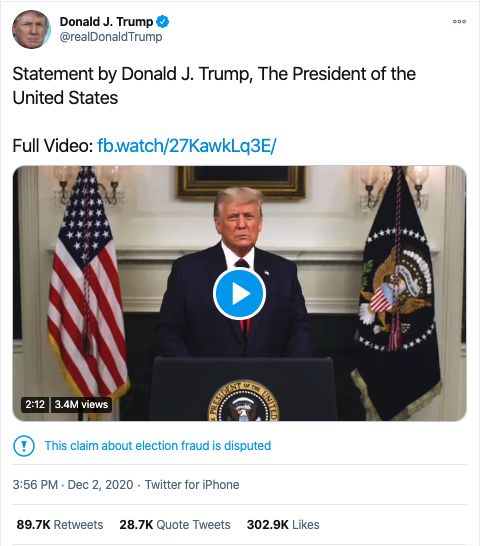 Here, we’ll explain the recurring themes from Trump’s address, with links to specific fact-checks of claims he invoked.

Claim: Trump is the rightful winner of the election.

Biden received 306 electoral votes and earned nearly 7 million more popular votes than Trump. Major media outlets projected Biden as the winner on Nov. 7, when the data clearly showed that Trump had run out of ways to win. Key battleground states have since certified their results.

Claim: The evidence of fraud is "overwhelming" with "millions of illegal votes."

There remains no evidence of widespread fraud or millions of illegal votes. State and local election officials have disputed Trump’s claims of fraud, as have international observers and U.S. cybersecurity experts. The Trump legal team’s lawsuits alleging fraud in various swing states have been widely rejected by judges.

"Calling an election unfair does not make it so. Charges require specific allegations and then proof. We have neither here," wrote Judge Stephanos Bibas, a Trump appointee, in an opinion in a Pennsylvania case before the 3rd Circuit U.S. Court of Appeals.

Claim: The election was stolen from Trump.

No person or group stole the election from Trump. He lost, and Biden won. There is no evidence of widespread fraud that would alter the results.

Claim: The election and mail-in voting were "rigged."

When Trump said before the election that a rigged election would be the only way Democrats would win, we rated it Pants on Fire.

A conspiracy to rig an election would require hundreds of thousands of people working together to commit felonies. It would be highly improbable. And there’s no evidence it happened.

Claim: Mail-in ballots were sent out by Democrats "with virtually no safeguards."

For starters, Republican election officials also mailed out ballots. And there were safeguards nationwide, including signature verification in states such as Nevada and Georgia.

Voter fraud is statistically rare, including for mail voting. Experts said the safeguards and verification processes are the same for mail and absentee ballots. Trump voted by mail.

This is Pants on Fire.

One early-morning jump in Biden votes that Trump described in his address occurred Nov. 4 when Milwaukee, Wis., reported its absentee ballots all at once. The votes were legally cast before Election Day. They were not fraudulent.

Trump and his allies have made similarly false claims about "dumps of votes" favoring Biden in Michigan and other states. Those, too, are inaccurate.

Claim: There were ballot-counting irregularities in Pennsylvania.

Election observers from both parties were allowed to observe the ballot counting process in the states where Trump has claimed Republicans were barred, including Pennsylvania. Trump’s claim has been contradicted by photo evidence, election officials and his own lawyers in court.

Trump also asserted that Democrats got special treatment in being able to correct issues with absentee ballots. But that is misleading, FactCheck.org reported.

All Pennsylvania counties were instructed to notify political parties and update an online system when ballot errors were found. The goal was to allow those voters to cast provisional ballots.

Some counties notified voters, while others did not.

Trump’s attacks on Dominion Voting Systems are inaccurate and conspiratorial.

Dominion was founded in 2003 and has headquarters in Denver and Toronto. Its technology is used to administer elections in 28 states, including some that went for Trump. The company has set up a webpage to address the misinformation about it. Here’s what Trump got wrong:

Trump’s claim that the Georgia recount "means nothing" without signature verification is Pants on Fire. It ignores that a recount can only be a recount of ballots that have already been verified.

States separate ballots from their signed envelopes after verifying the signatures in order to protect the privacy of the vote. In Georgia, they’re verified twice.

Trump also repeated misleading claims that the recount found thousands of votes that were "out of whack."

Election officials found more than 2,600 uncounted votes in Floyd County, Ga., most of which favored Trump. They were not proof of fraud, and the recount still certified Biden as the winner.

Claim: "No identification of any kind was required" to vote absentee in swing states.

This is wrong. State policies vary.

"First, validation of the voter happens at the point of voter registration and in some states, like Georgia, election officials compare the signature on the application for a mail ballot to what’s on file and again when the ballot is returned," said Amber McReynolds, chief executive officer of the National Vote at Home Institute and a national expert on election administration. She said the signature verification process takes the place of the ID validation that would occur in person.

The states Trump singled out — Pennsylvania, Michigan, Nevada, Georgia and Arizona — sent ballots only to voters who requested them, or to voters who are active, McReynolds said.

Claim: There were "more votes than there were voters."

This is Pants on Fire.

In the swing states where Trump’s legal team has contested the results, there were far more registered voters than votes cast. And his team has provided no proof of double voting.

PolitiFact has debunked false claims alleging that dead voters cast ballots in Detroit and Wayne County, Mich. Similar claims that cropped up during the primary were also baseless.

The fact that dead people remain on voter rolls is not proof of voter fraud. It is a crime if someone fills out and submits a ballot in the name of a dead voter. Trump’s claim that dead people "filled out ballots," "made applications," "voted" and "went through a process" themselves is nonsensical, since those people are dead.

The allegation resembles online misinformation, such as the Pants on Fire false claim that a video showed election workers in Flint, Mich., stuffing ballots. The video was shot in Russia.

In Michigan, voters who are in the military, overseas or have certain disabilities are emailed ballots that clerks have to replicate into the correct ballot format in order to be counted. They are only counted once. Michigan certified the election, making Biden the official winner of the state.

The New York Times, "Over 30 Trump Campaign Lawsuits Have Failed. Some Rulings Are Scathing," Nov. 25, 2020

The Associated Press, "The Latest: International observers see no fraud in US vote," Nov. 9, 2020

PolitiFact, "No, Hugo Chavez’s family does not own Dominion Voting Systems," Dec. 3, 2020

PolitiFact, "Donald Trump wrong that a winner has to be announced Election Night," Oct. 28, 2020

PolitiFact, "What is ballot harvesting, and why is Trump tweeting about it during an election-year pandemic?" May 29, 2020