Donald Trump
stated on November 4, 2020 in a tweet:
“Last night I was leading, often solidly, in many key States, in almost all instances Democrat run & controlled. Then, one by one, they started to magically disappear as surprise ballot dumps were counted.”

Election officials huddle around a table as absentee ballots are processed at the central counting board in Detroit on Nov. 4, 2020. (AP)

• In some states, Trump did initially lead, only to see Biden surge back and take the lead. But in others, Biden led and Trump came back from behind to take the lead.

• Beyond that, however, such variations in who led the race stems from the normal tabulation processes playing out. And the allegation of “surprise ballot dumps” is flat wrong. Officials had been warning about delays in counting for months.

• It also didn’t have anything to do with improper actions by Democrats.

The day after Election Day, as Democratic presidential nominee Joe Biden was gaining ground in key battleground states, President Donald Trump decried what he saw as unfairness in the ballot counting.

"Last night I was leading, often solidly, in many key States, in almost all instances Democrat run & controlled," Trump tweeted on Nov. 4. "Then, one by one, they started to magically disappear as surprise ballot dumps were counted. VERY STRANGE, and the ‘pollsters’ got it completely & historically wrong!"

Last night I was leading, often solidly, in many key States, in almost all instances Democrat run & controlled. Then, one by one, they started to magically disappear as surprise ballot dumps were counted. VERY STRANGE, and the “pollsters” got it completely & historically wrong!

Trump may have a point about polling being wrong, but we’ll set that aside until analysts dig into the question.

Here, we’ll look at whether Trump was leading in key states controlled by Democrats but lost due to "surprise ballot dumps."

Trump is wrong on multiple levels. Variations in who led the vote count in a particular state stemmed from the normal tabulation processes playing out for counting mail-in votes. It wasn’t because Democrats were doing something improper.

It’s not unusual for candidates’ leads to bounce around

The "ballot dumps" were not a surprise. Officials have warned for months that one of the consequences of the flood of mail ballots — a byproduct of the pandemic — is that they take longer to count.

Many Democrats chose to vote by mail or through drop boxes, while many of Trump’s supporters decided to vote at the polls on Election Day since Trump had been critical of mail ballots. Different states and even counties within a state have different rules for what ballots were tabulated first. This meant that when jurisdictions released their most recent ballot counts on Election Night, how the ballot was cast became highly correlated with the likelihood of that batch of ballots being strong for either Biden or Trump.

By the wee hours of the morning after the election, significant numbers of ballots remained to be counted in the Democratic strongholds of Pennsylvania such as Philadelphia, the Philadelphia suburbs and Pittsburgh. Similarly, in Wisconsin and Michigan, the Democratic areas of Milwaukee and Detroit had significant numbers of ballots that remained to be counted. Trump’s lead in Georgia — like the three others, a state Trump won in 2016 — had also narrowed, with Biden making gains in and around Atlanta.

Because of these factors, lead-switching between the candidates was not a sign of something amiss. It was just a sign of the process unfolding and all ballots cast being counted. And lead switches happen even in the best of circumstances, when high, pandemic-driven levels of mail ballots are not being used.

"We have 50 different election systems in the United States," said Colorado State University political scientist Kyle Saunders. ‘Some of them are well financed with great infrastructure, some are not. Some can release their results quickly, many cannot. Those who release their results slowly also release those results as they come in. That means the patterns that you see with 40% of the vote in are likely to be quite different than after all of the vote is in. It completely depends on the order in which counties or regions of a state report their results."

Trump jumped out to a lead in certain states, only to see that lead narrow or disappear entirely. This was the case in Wisconsin and Michigan, and it may yet happen in Pennsylvania and Georgia as the final ballots are counted.

But the same thing happened to Biden elsewhere.

Decision Desk HQ, a private vote-tracking firm, initially colored several states blue for Biden early in the evening based on initial returns, including Florida, Georgia, Kentucky, and South Carolina. Another state, Virginia, was shaded red at the time. 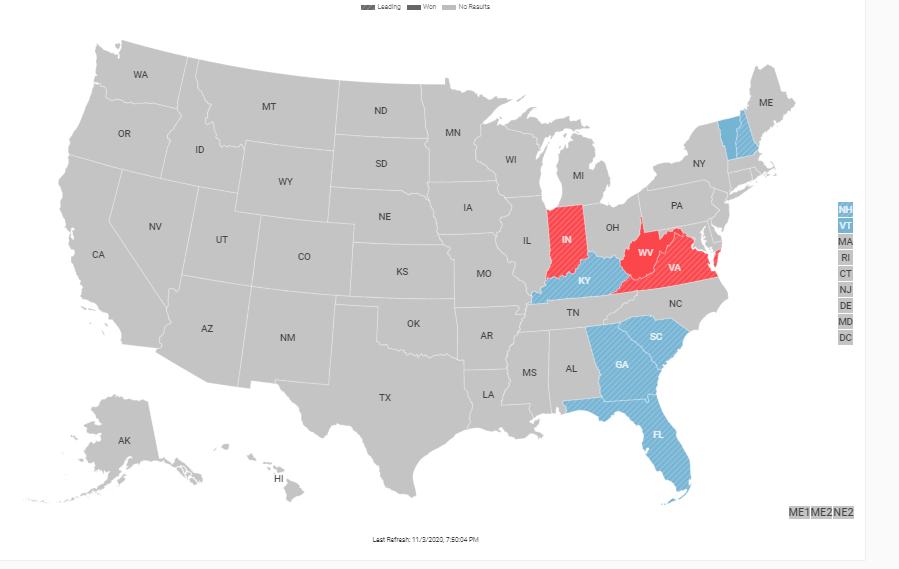 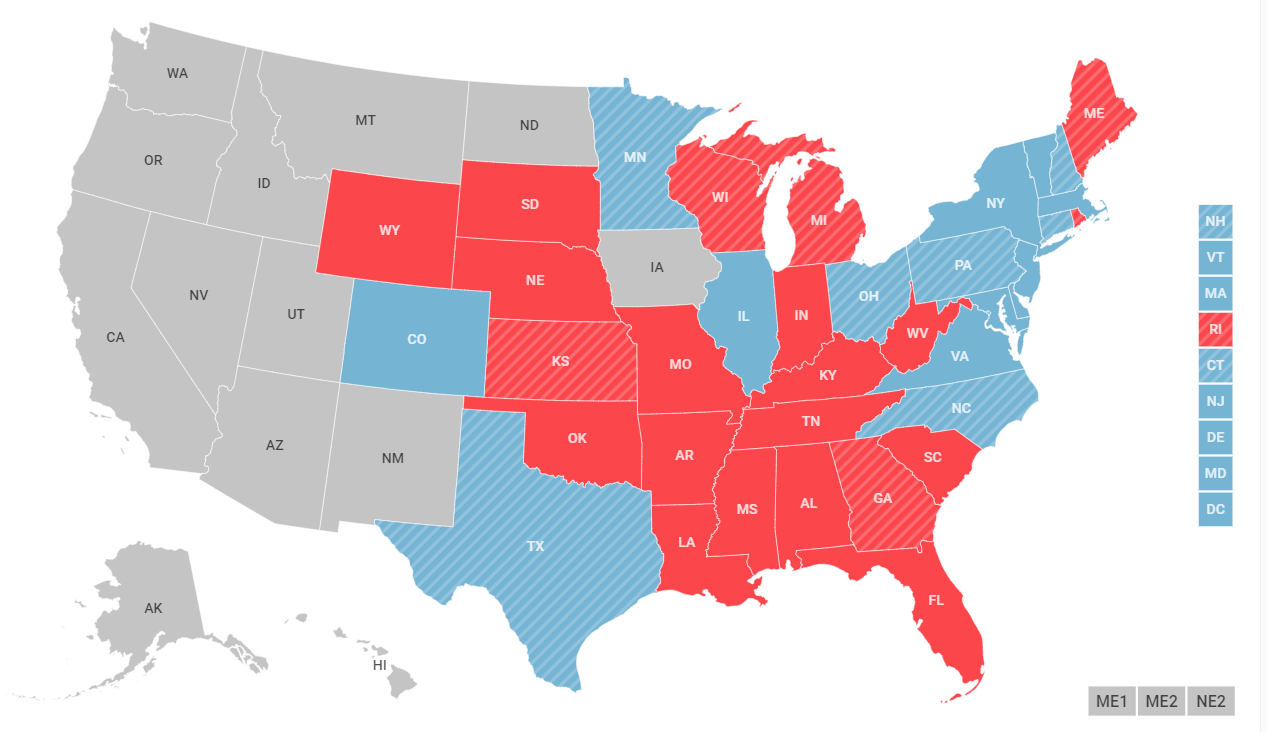 Still later, North Carolina, Ohio, Pennsylvania, and Texas had all become red, while Rhode Island and Maine had been recast as blue. 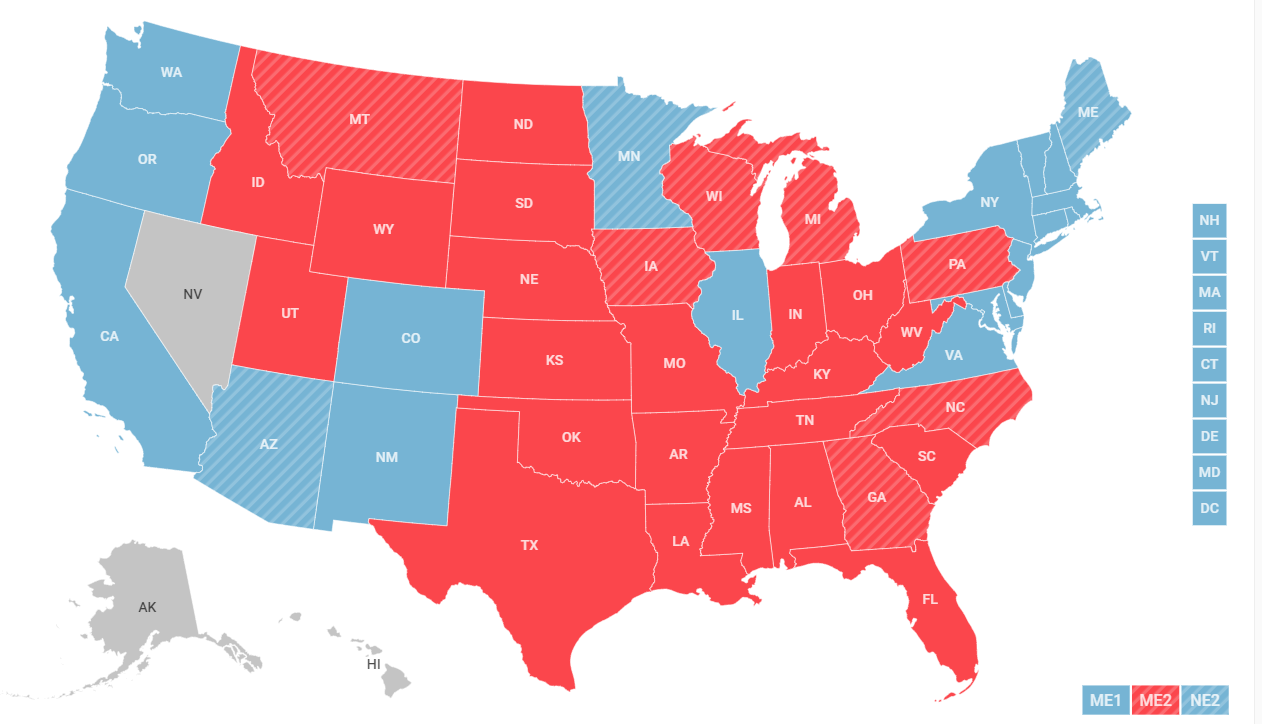 After the polls closed, the New York Times tracked whether Trump or Biden led as more ballots were counted over time. Their data shows that in at least four states, Biden was ahead for a while before Trump took the lead: Georgia, North Carolina, Pennsylvania, and Wisconsin. Another state saw Biden jump out to an initial lead before seeing Trump eat into his edge, though Biden was eventually called the winner in Arizona.

The North Carolina pattern was particularly notable, because Biden was ahead as the first 80% of ballots were counted, before falling behind Trump after that.

So the leads changed in many states over the course of the night — and in both directions, not just the one Trump was complaining about.

"It has nothing to do with whether they were ‘Democrat-run’ or not," said Emory University political scientist Alan Abramowitz.

Trump said, "Last night I was leading, often solidly, in many key States, in almost all instances Democrat run & controlled. Then, one by one, they started to magically disappear as surprise ballot dumps were counted."

In some states, Trump did initially lead, only to see Biden surge back and take the lead. But in others, Biden led and Trump came back from behind to take the lead.

The allegation of "surprise ballot dumps" is flat wrong. Officials had been warning about delays in counting for months.

Variations in the ballot counting were due to the normal tabulation playing out, and it didn’t have to do with anything improper by Democrats.