Ever since the Jan. 6 storming of the Capitol, lawmakers have been trying to get to the bottom of what exactly happened on that day. A Senate hearing on March 3 focused on why it took National Guard troops so long to arrive on scene after the Capitol Police requested assistance.

The bipartisan hearing featured testimony by Maj. Gen. William Walker, the commander of the District of Columbia National Guard, and Robert G. Salesses, who took over as assistant secretary of defense for homeland defense and global security on Jan. 20.

The discussion, during a joint meeting of the Senate homeland security and administration committees, zeroed in on a three-hour period of time, roughly between 2 p.m. and 5 p.m.

In an interview on CNN, one of the hearing’s co-chairs, Sen. Amy Klobuchar, D-Minn., summarized the testimony this way: "For three hours, the head of the D.C. National Guard had to wait to get the authority while we were all watching on TV these insurrectionists breach the police line, break the glass. The Defense Department didn't give authority."

A review of the testimony and other documents suggests that Klobuchar’s summary is essentially accurate. However, a timeline of interactions between the D.C. National Guard and the Pentagon shows there are some nuances.

The Guard needed Pentagon approval to deploy at the Capitol, and the testimony reveals two main delays in the approval process.

The first delay lasted about 90 minutes. It came between the time the Pentagon granted approval for Guard members to move to the D.C. Armory and the time it gave the go-ahead to move to the Capitol.

The second delay lasted about 30 minutes. That was between the time the Pentagon approved the Guard’s move to the Capitol and the time that word of this approval reached Walker, the Guard’s commanding officer.

If those twin lags could have been shortened, it would have meant that the Guard could have arrived closer to an hour after the initial call came, rather than three.

The Pentagon "has initiated an investigation into the response to the events of Jan 6., and is looking closely into all aspects of the operation," said Army Lt. Col. Chris Mitchell, a Defense Department spokesman.

On Jan. 4 and Jan. 5, the defense secretary and the Army secretary both sent letters outlining the limits of what the National Guard could do if safety concerns arose amid planned protests by supporters of then-President Donald Trump. Those protests were timed to Congress’ official counting of the electoral votes that would confirm the victory of Joe Biden over Trump.

The bottom line from the letters was that the Guard would need to stay on the sidelines unless it received specific approval from the Army secretary and the defense secretary to mobilize and engage with protesters.

"You may employ the (D.C. National Guard) Quick Reaction Force only as a last resort and in response to a request from an appropriate civil authority," the letter said. It added that the Guard "reports to the Secretary of Defense through the Secretary of the Army," and it listed a number of restrictions that could only be lifted with such authorization, such as issuing weapons, using riot control agents, using helicopters, or conducting searches and making arrests. 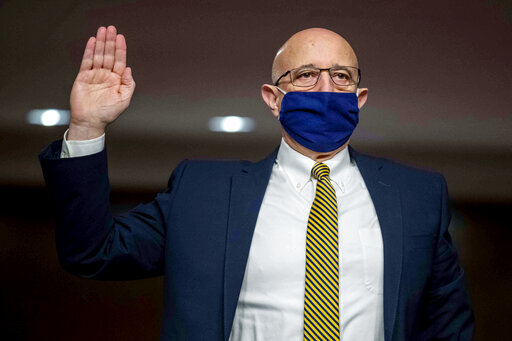 Senior Department of Defense official Robert Salesses is sworn in prior to a Senate hearing on the Jan. 6 attack on the U.S. Capitol on March 3, 2021. (AP)

On Jan. 6, a crowd of Trump supporters gathered on the Capitol grounds and eventually breached the building. Here is a rundown of key events, based on testimony and Defense Department documents.

1:26 p.m.: As the building is surrounded by protesters but not yet breached, the Capitol Police order the evacuation of the Capitol complex.

"Chief Sund, his voice cracking with emotion, indicated that there was a dire emergency at the Capitol, and he requested the immediate assistance of as many available national guardsmen that I could muster," Walker testified. "Immediately after that 1:49 call, I alerted the U.S. Army senior leadership of the request."

About 2:15 p.m.: First breaching of the Capitol building by rioters.

2:22 p.m.: Top Army officials speak by phone with Bowser, Walker, and senior District of Columbia and Metropolitan police officials to request support from the Guard.

Walker said some obstacles emerged during this call. "The Army senior leaders did not think that it looked good — would be a good optic," Walker testified. "They further stated that it could incite the crowd."

News reports have said two of the skeptics were Lt. Gen. Walter E. Piatt, the director of the Army staff, and Lt. Gen. Charles A. Flynn, the deputy Army’s chief of staff for operations, who is also the brother of former National Security Adviser Michael Flynn, a Trump ally who was pardoned by Trump. (Piatt and Charles Flynn have disputed aspects of this conversation to reporters.)

2:30 p.m.: Then-acting Defense Secretary Christopher Miller meets with Gen. Mark A. Milley, chairman of the Joint Chiefs of Staff, and Army Secretary Ryan D. McCarthy to discuss the requests from Bowser and Sund.

3:00 p.m.: Miller "determines all available forces" of the Guard are "required to reinforce" the D.C. Metropolitan Police Department and U.S. Capitol Police "to reestablish security of the Capitol complex," according to the Defense Department’s published timeline.

3:04 p.m.: According to the Pentagon timeline, Miller provides "verbal approval of the full activation" of the Guard. "Immediately," McCarthy directs the Guard to "initiate movement and full mobilization."

At this point, a quick-reaction force of Guard members was moved from Joint Base Andrews in suburban Maryland to the D.C. Armory. Moving the troops took about 20 minutes, Walker testified.

However, Miller’s approval during the 3:04 p.m. call was not official authorization to deploy to the Capitol. Rather, what Miller did was authorize the D.C. National Guard "to be called in from wherever their homes are to come to the Armory," Salesses explained under questioning from Sen. Roy Blunt, R-Mo. A second order would be needed in order to move from the Armory to the Capitol.

Salesses said that between 3:04 and 4:10, Army Secretary McCarthy "wanted to understand," given that shots had been fired already at the Capitol, "how the National Guard was going to be sent to the Capitol, what their missions were going to be, were they going to be clearing buildings, would they be doing perimeter security? How would they be equipped? … He was asking a lot of questions."

As Miller was deciding on this question, Walker was waiting for the signal to head to the Capitol. "In anticipation of a green light, a go, we put guardsmen on buses," Walker said. "And then we just waited to get the approval."

4:32 p.m.: Finally, according to testimony by Salesses, Defense Secretary Miller gave Army Secretary McCarthy approval for Guard forces to depart the Armory for the Capitol complex.

However, the word apparently did not get to Walker for roughly half an hour.

"I was on a secure video conference when the Army leadership conveyed to me that the secretary of defense had authorized the employment of the National Guard at the Capitol," Walker testified. "My timeline has 5:08 p.m. when we wrote down that we had approval."

5:40 p.m.: The Guard members arrive at the Capitol and begin operations.

Department of Defense timeline of Jan. 6