• Supporters of the “Freedom Convoy” movement in Canada have falsely linked images of other truck convoys to their own protests against vaccine mandates and other COVID-19 measures.

• They are using the photos to claim that their movement is more numerous and widespread than it actually is. But the images are unrelated to the demonstrations in Ottawa — some are decades old, others were taken far from Canada.

Days after members of the "Freedom Convoy" in Canada staged a large protest in Ottawa, Prime Minister Justin Trudeau called their behavior "an insult to memory and truth."

Protesters were caught on camera standing and dancing on the Tomb of the Unknown Soldier and other war memorials, and one demonstrator was recorded with an upside-down Canadian flag defaced with a swastika.

Some supporters of the Freedom Convoy have also insulted memory and truth online. According to PolitiFact and other fact-checking websites, supporters of the movement have falsely claimed that 2.3 million people and hundreds of thousands of trucks have taken part in the convoy, and that it broke a world record for longest convoy.

They have also falsely linked images of large gatherings of trucks to their movement, claiming that their demonstrations are more numerous, have more support, and are more widespread than they actually are.

Here are stories behind 10 of those images, and fact-checks pointing to their real origins. (We are not showing every image in this story because PolitiFact does not control the rights to the pictures.)

Some images being shared online show real protests by truckers, but are not related to the demonstrations currently taking place in Canada. One image on Facebook criticizes the mainstream media, GoFundMe, Justin Trudeau, and Facebook itself for repressing the Freedom Convoy. But according to PolitiFact, the photo shows a rally held by truckers in 2019 in support of the oil and gas industry in Canada.

Over 745 truck convoy in support of Canadian oil and gas in Grande Prairie today! In support of jobs in our energy sector. @CanadaAction pic.twitter.com/BhawvDo9qT

Another image of a real demonstration by truckers was used to claim that "the liberal media isn't talking about … the longest trucker convoy in history." The aerial image of a snowy highway actually shows a protest held in 2018, also in support of the oil and gas industry in Canada, according to Reuters.

Some of the images come with false backstories. A post on Facebook claims that the Amish prepared a "full BBQ supper" for members of the convoy in Winnipeg, but after police forbid the truckers from stopping in the city, the Amish followed the convoy until their next stop. There is no evidence that the story is true, and according to PolitiFact, the image of horse-drawn buggies used to illustrate it shows Mennonites going to church, not following the Freedom Convoy.

Truck shows are a rich source of material for people spreading misinformation about the convoy online. A post on Twitter containing the image above and the hashtag #FreedomConvoy2022 claims that the picture shows Australian truckers and implies that they are protesting vaccine mandates. But according to Reuters, the photo was taken in 2013 during a truck show in the United States.

This image of several aligned trucks decorated with lights was used to claim that the Freedom Convoy "is so much bigger than people think" and "the media wants us to believe." But it actually portrays a truck show held in 2019 by Pro-Trucker Magazine, according to USA Today. 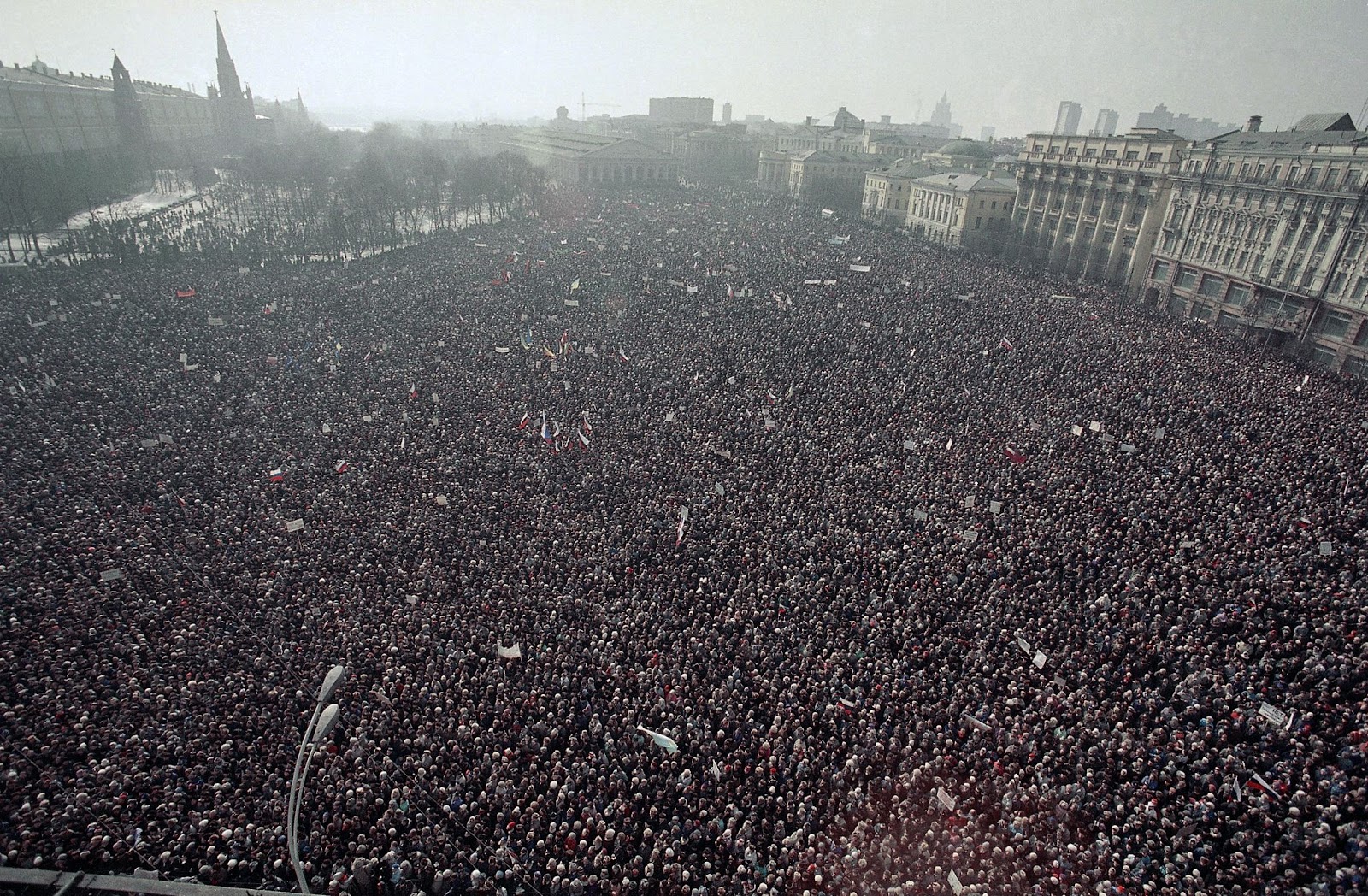 Some pictures give the false impression that the protests are larger than they are. A Facebook user shared the image above on Jan. 31 with the caption "Ottawa, Canada," likely in reference to the demonstration that took place there on Jan. 29. But the Associated Press photo shows protesters in Moscow demanding the resignation of Mikhail Gorbachev. The rally in Ottawa had 15,000 participants; the protest in Moscow had 500,000.

Supporters of the Freedom Convoy are also sharing images of trucks in other countries to claim that their movement has a broad international presence. "First it was Canada, and now Italy," says one social media post. But the trucks in the accompanying video are celebrating a religious festival near Turin in 2021, according to Italian fact-checking website Facta.

Posts on Twitter say that the video above portrays Brazilian truckers showing "solidarity" and "support" for Canadian truckers. But they are actually rallying for Brazilian president Jair Bolsonaro, according to Brazilian fact-checking website Aos Fatos.

Some images have been used to spread misinformation about protest movements before. This photo was shared last year during demonstrations against COVID-19 measures, and again this year amid the protests in Canada. But it has nothing to do with either. According to Reuters, it shows a farmers’ demonstration in the Netherlands that took place in 2019.

This is what it looks like when we unite and stand up for what we believe in.
Thanks Canadian Truckers for inspiring the world 🌎 ❤💪 https://t.co/K6WISwLsIT

The video accompanying the post above was shot in 2019 and shows a protest by farmers against environmental policies in Germany. Last year, Twitter users claimed the image showed a demonstration against COVID-19 measures. Now, people online are saying that the image shows members of the Freedom Convoy.

CTV News, "Police look to identify suspect in desecration of the Tomb of the Unknown Soldier," Feb. 2, 2022

CBC News, "Edmonton-area MP under fire for photo of him near flag bearing Nazi symbol," Jan. 30, 2022

PolitiFact, "Looking at how many trucks are participating in the ‘Freedom Convoy’ in Canada," Jan. 28, 2022

Facebook posts
stated on February 20, 2022 a public Facebook group:
Photos show “Ukrainian Christians pray outdoors, in the snow, for their country in this phase of war danger.”

TikTok posts
stated on November 21, 2021 a TikTok post:
Richard von Coudenhove-Kalergi planned “the ethnocide of the peoples of Europe” through “the encouragement of mass non-white immigration.”

Facebook posts
stated on October 29, 2021 a post:
“Stalin once ripped all the feathers off a live chicken as a lesson to his followers.”

Facebook posts
stated on October 22, 2021 a public Facebook group:
“The Spanish High Court has announced (COVID-19) is a bio weapon with a patent, not a virus.”