A Ukrainian firefighter walks between at fragments of a downed aircraft seen in in Kyiv, Ukraine, Friday, Feb. 25, 2022. (AP)

As news of Russia’s invasion of Ukraine spread across the world, misinformation quickly followed.

Social media feeds are filled with distressing images, videos and stories with descriptions that convey they are scenes from the ongoing crisis. And while legitimate coverage of the operation has shown troubling scenes of destruction and turmoil, many of the images appearing on social media have turned out to be fake, outdated or unrelated to the fighting in Ukraine.

Here are some internet hoaxes about the conflict that PolitiFact has debunked so far.

Image of plane on fire taken 30 years ago 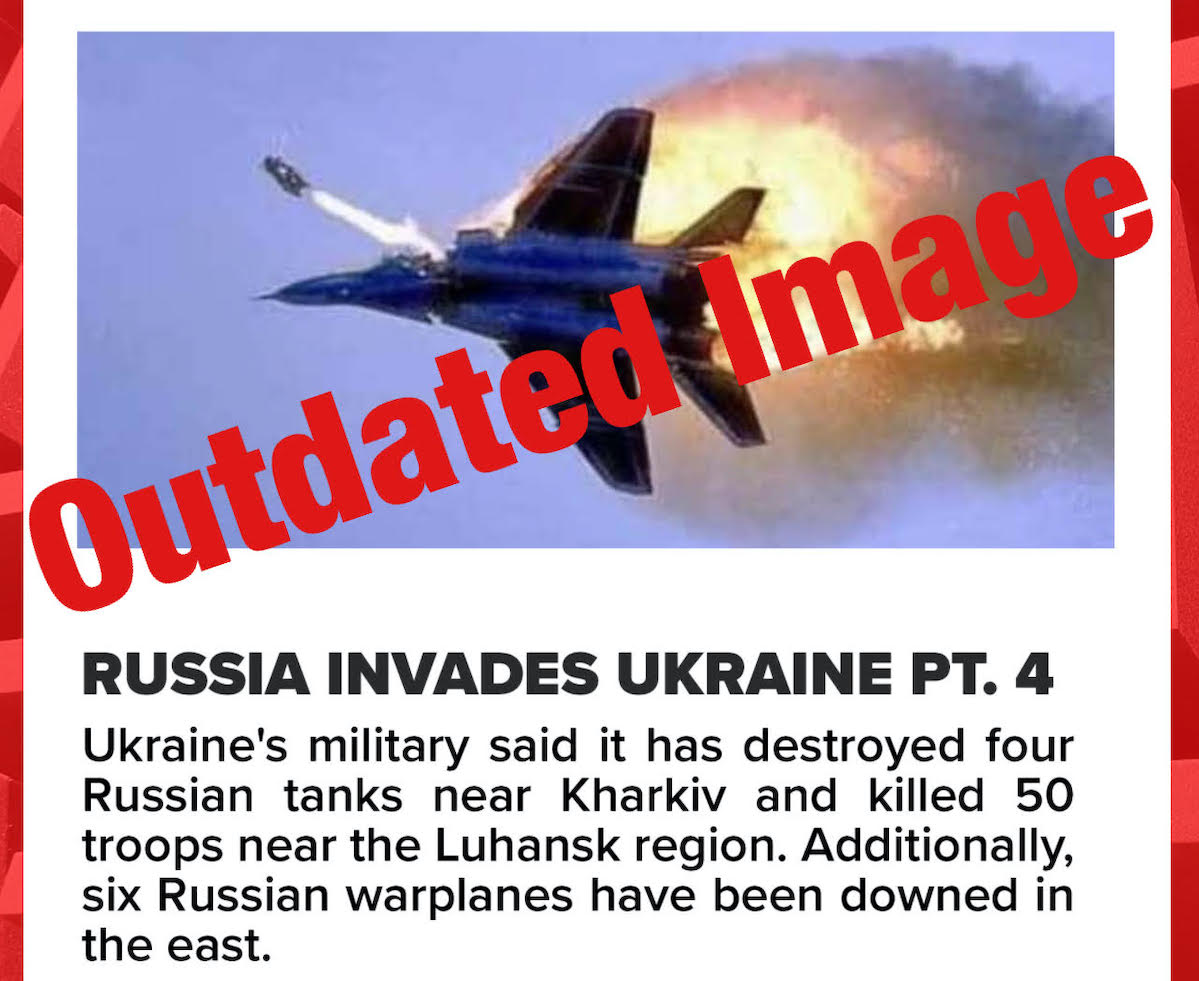 (Screenshot from Facebook)
A photo of a plane on fire is said to depict a Russian warplane that was downed by the Ukrainian military. But reverse-image searches revealed that the photo predates the invasion — by about 30 years.

It’s from an airshow that took place in July 1993 when two Russian fighters in England collided mid-air.

Both pilots, from the Russian Flight Research Institute, ejected from their planes and survived with minor injuries, according to news reports.

Footage of Russian planes is from 2020 parade rehearsal

Footage of planes flying in formation during a rehearsal for Russia’s 2020 Victory Day celebration has provided fuel for misinformation.

In reality, the recordings were captured on May 4, 2020, when, the Moscow Times said in a YouTube post, 74 Russian military planes and helicopters flew over Moscow to rehearse for the event.

Photos of Ukrainians praying are miscaptioned

(Screenshot from Facebook)
Ukrainians have been praying for peace from a Russian threat for a long time. So long, in fact, that two images published in 2015 and 2019 that show public prayer events have been mischaracterized as if they show people responding to the week’s events.

One of the images, shared on Facebook on Feb. 20, features people kneeling in a paved area. It came with a caption that said the Ukrainians pictured had declared "today" a day of prayer and fasting for their country. Another photo shared the same day shows several people gathered and kneeling in pairs, with a caption that claims the prayer was happening "in this phase of war danger."

The photo of the paved area was published online in 2015, according to Marc Ira Hooks, the photographer who took the picture. The Orthodox and evangelical Ukrainians depicted in the image decided to start praying for peace in 2014, Hooks said, as their country entered the period of political turmoil and violence that has yet to cease.

The other picture, showing the square covered by snow, was first published online in 2019, according to the International Mission Board, an evangelical missionary group.

Two clips circulating online that come with claims that they show the conflict aren’t even from the real world. They’re animated simulations from different video games.

One shows a jet doging heavy gunfire and the other appears to depict a barrage of missiles being launched into the air.

The jet video is from a game called "Arma 3" and similar clips of the gameplay can be viewed on YouTube. The missile's video has been on the internet since at least December 2021 and depicts a teaser clip from a game named "War Thunder."

TikTok of parachuting soldiers is from 2015 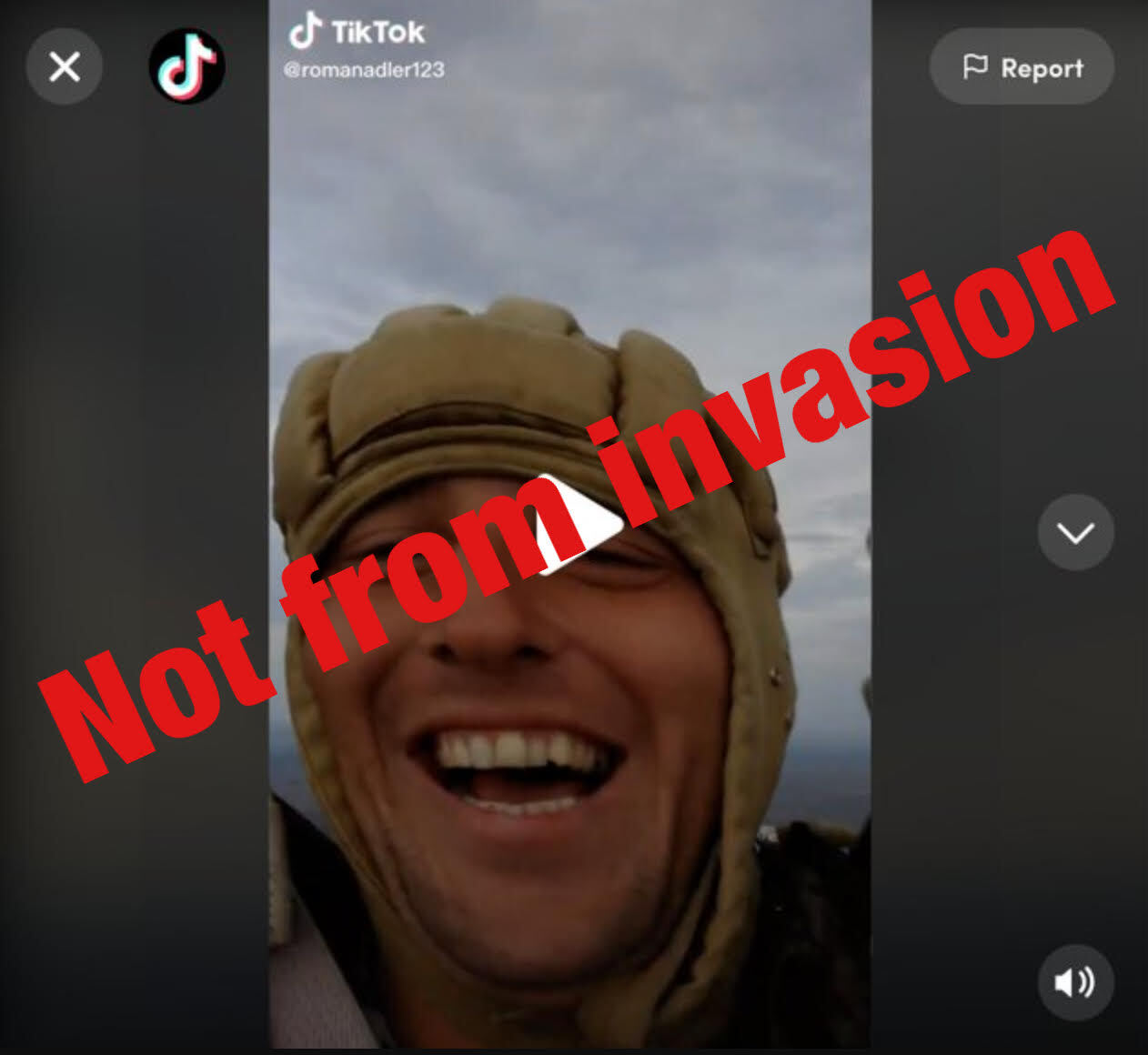 (Screenshot from Facebook)
A video of soldiers in uniform parachuting over fields quickly generated comments from users on TikTok who believed they were seeing Russia’s invasion happen in real-time.

The video shows three soldiers parachuting over fields and has no caption nor any text that would suggest when or where it was taken. The person making the video is heard speaking in a language other than English. It was shared in the early morning on Feb. 24 leading many to believe it depicted the current Russian attack on Ukraine.

"Bro is recording an invasion," said one commenter. "Just stumbled across Russian war tactics," said another. "I can't believe I’m watching a war on tiktok," someone else wrote.

But the video was first shared on Instagram in August 2015 by someone with the same username as the person who shared it on TikTok. NBC News said the video depicts a training exercise, but did not specify where.

There are no U.S.-run biolabs in Ukraine

While false claims from Russia alleging bioweapon use by the U.S. aren’t new, Russia’s invasion has resurrected the assertion, with one social media user tweeting that Russia was targeting the supposed labs when it began its invasion. That account was quickly suspended, but others shared the post and began using the hashtag #USbiolabs.

There are no U.S. military-run biolabs in Ukraine. The country is one of many former Soviet Union republics, as well as other countries, that partner with the Defense Department as part of the Cooperative Threat Reduction Program. It’s the latest claim in a series of disinformation efforts by the Russians, an expert told PolitiFact.

While the U.S. may provide funding to upgrade or build labs in other countries, the labs are run by the partnering nations and the program’s goal is to prevent biological threats, not create them.

PolitiFact, Photos of Ukrainians praying "in this phase of war danger" are actually from years ago, Feb. 25, 2022

PolitiFact, There are no US-run biolabs in Ukraine, contrary to social media posts, Feb. 25, 2022

PolitiFact, No, this TikTok does not show Russian soldiers invading Ukraine, Feb. 25, 2022