Abortion-rights activists setup an abortion pills educational booth as they protest outside the Supreme Court in Washington on July 4, 2022 (AP)

Many social media users are sharing lists of herbs they say or imply can be used to safely induce miscarriages now that abortion is illegal or soon to be in many states.

But there’s little scientific evidence to back the claims, and experts warn that many of the herbs, even if they can induce a miscarriage, can imperil the health of the person taking them if taken in large amounts.

Dr. Mary Jane Minkin, a gynecologist and professor at the Yale School of Medicine, said she "would strongly discourage" anyone from using herbs to try to induce an abortion.

"One of the major problems in the U.S. is that we really have no regulation of herbal products, so you have no idea of what you are getting as far as amount or purity of the substance you are receiving," she said.

Instructions for some herbs might say, "Do not use if pregnant because this product may cause uterine contractions," Minkin said. But that doesn’t mean it will cause an abortion. It "may just be dangerous," she said.

One tongue-in-cheek June 24 Instagram post detailed seven herbs or combinations it says women should avoid during pregnancy in order to prevent miscarriages.

"These are just a handful of herbs that may disrupt hormones, cause uterine contractions, & that should be avoided by anyone wanting to keep a pregnancy viable," the post read. "Keep learning about these & other herbs you may have access to that cause these situations. I mean how else will we avoid accidental miscarriages?"

"The most effective, well-studied regimen for medication abortion in the U.S. is mifepristone and misoprostol," said Megan Freeland, a doctor of pharmacy and the director of health communications at Planned Parenthood Federation of America. 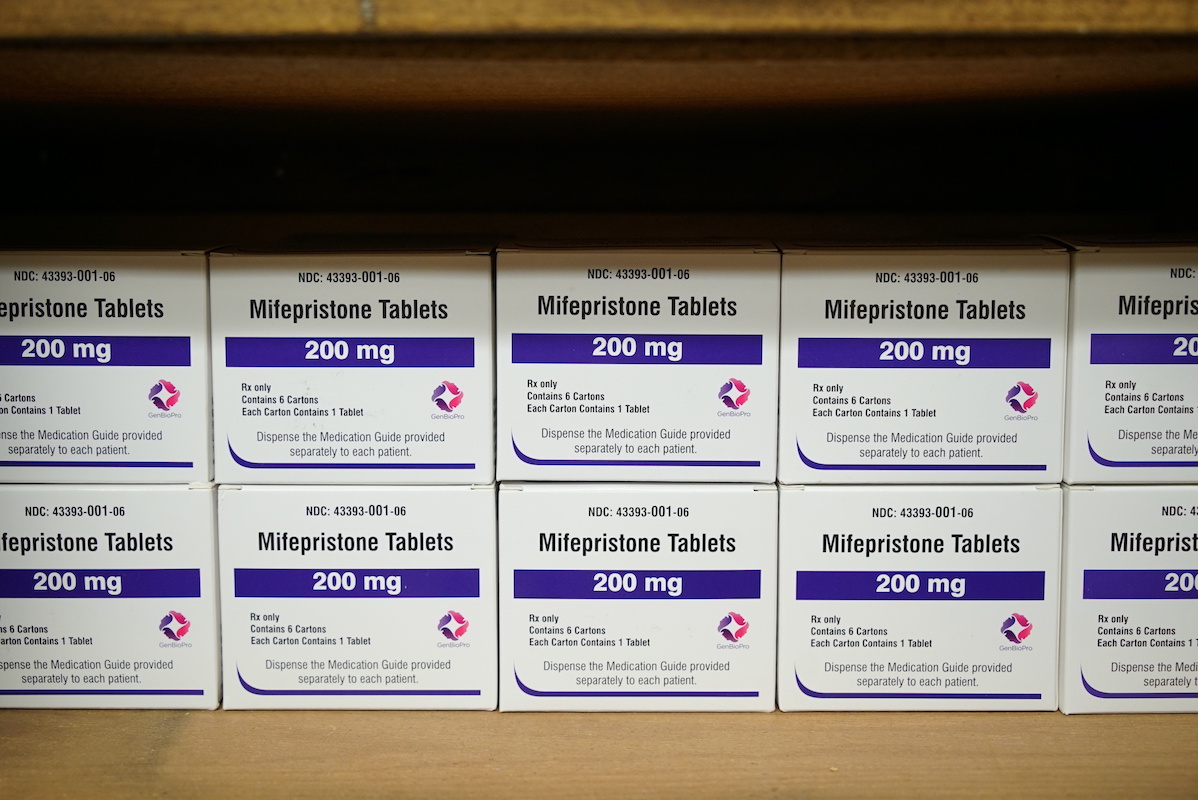 Boxes of the drug mifepristone line a shelf at the West Alabama Women's Center in Tuscaloosa, Ala., on March 16, 2022. The drug is one of two used together in "medication abortions." (AP)

Dr. Nisha Verma, a Darney-Landy Fellow at the American College of Obstetricians and Gynecologists, said that people have been self-managing abortions for decades using medications like misoprostol. She cautioned about misusing herbal remedies.

"Misinformation can be harmful because it may lead people to try to end their pregnancies in an unsafe way, potentially exposing them to serious bodily harm," Verma said. "While people can self-manage their abortions in a safe way, spreading misinformation about unsafe methods of abortion is incredibly dangerous."

Pennyroyal: The post correctly notes that pennyroyal tea can destroy your liver and people shouldn’t drink it. It implies that rubbing the oil on the pelvis area can induce abortion.

The National Institutes of Health’s National Library of Medicine says there’s "insufficient evidence" to determine if pennyroyal is effective for ending a pregnancy. It warns that if ingested orally it can cause liver and other damage, but also that it is unsafe to apply to the skin.

"There is some evidence that pennyroyal oil can cause abortions by causing the uterus to contract," the NIH website reads. "But the dose needed in order to cause an abortion could kill the mother or cause life-long kidney and liver damage."

Cotton root bark: Historically, this herb was used by indigenous North American tribes and enslaved people who were victims of rape in the U.S., according to Science Direct. Although its safety is unproven, it was used to stimulate menstrual flow or as an abortifacient, which refers to a substance that induces an abortion.

Black cohosh, blue cohosh and angelic root: Researchers at The University of Texas at El Paso describe black and blue cohosh as "herbs to avoid during pregnancy." It says both "may induce uterine contractions" and that blue cohosh might be toxic to the fetus.

"Angelic root" might refer to "Angélica," which the university also lists as an herb to avoid, as it might induce contractions.

Queen Anne’s lace: Queen Anne’s lace seeds have historically been used "as both a contraceptive and as an herbal ‘morning-after pill,’" according to a 1994 Washington Post report.

Mugwort: This herb may start menstruation and cause the uterus to contract, but little is known about the safety of ingesting it, according to the National Center for Complementary and Integrative Health. Mugwort contains thujone, which can be toxic in large amounts, particularly in oil form, said a Medical News Today analysis in 2020.

"Historically, experts have associated this herb with pregnancy loss, so many recommend that pregnant people avoid mugwort so as to minimize the risk of miscarriage," Medical News Today said.

Rue: This evergreen shrub can act as an abortifacient but it can have severe side effects, including gastric pain, vomiting and even death, according to drugs.com. Rue has been used to end pregnancies, "but this is a very dangerous practice, which may cause death to the mother as well as the baby," according to the University of Texas at El Paso’s Herbal Safety page.

Parsley: A tea made with this commonly consumed herb has been shown to cause contractions or miscarriage when consumed in high doses. A woman in Argentina who used parsley to try to induce an abortion died from septic shock and infection in 2018, Newsweek reported.

It’s also unclear what impact these herbs might have on the health of the fetus, if a person tried and failed to induce a miscarriage using them.

Rather than use herbs to induce abortions, experts encourage people to contact a medical professional for guidance on how to safely end a pregnancy. Doctors say that people who don’t have a doctor or whose providers cannot or will not support their efforts to get an abortion, can contact organizations that can identify nearby abortion clinics and sometimes provide financial assistance.

The Washington Post, "Abortion is now banned in these states. See where laws have changed." accessed July 3, 2022

Medical News Today, "What to know about mugwort"

Healthline, "Can You Drink Parsley Tea While Pregnant?"

Email exchange with Megan N. Freeland, a doctor of pharmacy and the director of health communications at Planned Parenthood Federation of America, July 5, 2022

Email exchange with Dr. Nisha Verma, a Darney-Landy Fellow at The American College of Obstetricians and Gynecologists, July 5, 2022

Email interview with Dr. Mary Jane Minkin, a gynecologist and professor at the Yale School of Medicine, July 5, 2022

The University of Texas at El Paso, "Herbal Safety - Herbs to Avoid During Pregnancy," accessed July 5, 2022

Reuters, "Most states protect doctors who refuse to do abortions because of religion," Nov. 19, 2019